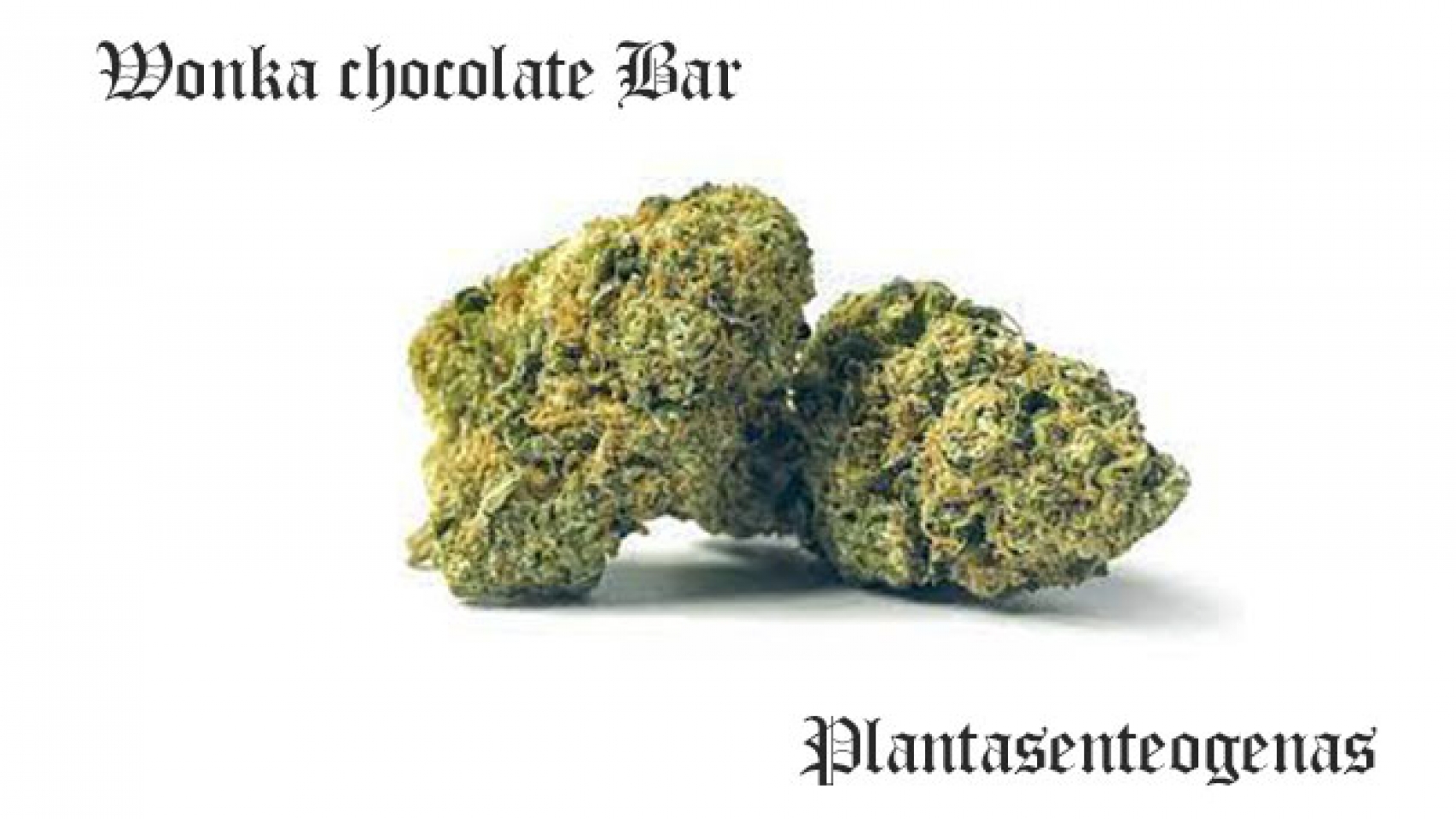 Wonka Bars from Exotix Genetix is a cross of GMO Cookies and Mint Chocolate Chip. This sativa-dominant plant grows medium-tall and produces heavy yields that would please any grower. Buds come in dark purple colors and covered in thick trichomes.

Wonka Bars, also known simply as “Wonka Bar,” is a sativa dominant hybrid strain (70% sativa/30% indica) created through a cross of the potent GMO X Mint Chocolate Chip Cookies strains. One taste of this gorgeous bud and you’ll be ready for your trip to the chocolate factory. Wonka Bars packs a sweet and nutty flavor with hints of sharp mint upon exhale. The aroma is very similar, although with a heavily pungent overtone that lingers long after the nugs are burned away. The Wonka Bars high is definitely a creeper, sneaking up on you over several minutes before you finally feel the full effects of its power. You’ll feel a subtle influx of light energy that gets you mentally up and moving, filled with creativity and a touch of focus. Soon afterwards, a relaxing body high will begin to work its way through your very bones, easing away any aches and pains without causing sedation. Thanks to these effects and its high 15-20% average THC level, Wonka Bars is said to be perfect for treating patients suffering from conditions such as appetite loss or nausea, depression, chronic pain and chronic fatigue. This bud has spade-shaped forest green nugs with deep purple leaves, lots of thick orange hairs and a coating of tiny purple-tinted crystal trichomes.

The Wonka bars from Skord Marijuana is a flower that will have you feeling the perfect mix of “What’s going on?” and “There’s where I left my keys”. Smoking this near 50-50 hybrid leaves you pleasantly disoriented and yet in exactly the right place all at once. Wonka Bars is a great “movie weed” strain and could even be enjoyed before some physical activity for those who like a heavy Indica punch to balance the strong Sativa high.

The flower is a unique blend of GMO cross-bred with Mint Chocolate Chip. The buds are covered with dense trichrome crystals and have hints of navy blue and bright emerald green peeking through a ton of frosted creamsicle colored orange hairs.

See what we mean?!

The special color of the flowers is clearly genetic and not induced by temperature. This is to say; the weed is a deep blue and green color because that is how it was bred and should look, rather than because it had low temperatures in the growing environment which create darker colors and stimulate chlorophyll production. The latter or “fake color” would be shown by the purple coloration being present primarily on fan leaves and the buds would be a much lighter color which didn’t match the fan leaves or sugar leaves. This is not the case with these beautiful flowers. The colors are expressed naturally and to their full potential.

The smell is hard to describe and that’s a good thing. You really have to experience this Skord Marijuana strain for yourself. The smell is like a blend of gasoline and baked goods which is pungent yet pleasant on the nose. This is a strain which is as easy to smell as it is to smoke. It shocks your nose while leaving you wanting more. The Wonka Bars are more palatable than some more purely pungent strains. The smoke is also one which rewards the patient stoner as the high builds gently and gradually after smoking.

The Wonka Bars and many other unique blends from Exotic Genetics grown by Skord Marijuana are available at all A Greener Today locations. Call in advance or reserve online to assure selection.

Willy Wonka is a sativa-dominant strain with a smooth yet energetic high that’s great for cannabis novices. Created by Spanish seed company Mr. Natural, this hybrid is a cross between the Thai-descended Chocolate Trip and famed Cinderella 99. With a robust flavor and powerful effects, it’s no wonder that a concentrate produced from Willy Wonka took home honors in the 2014 High Times Cannabis Cup in Denver. This strain scores consistently high marks for potency – cannabis testing lab Analytical 360 found multiple samples of Willy Wonka to have between 20% and 28% THC.