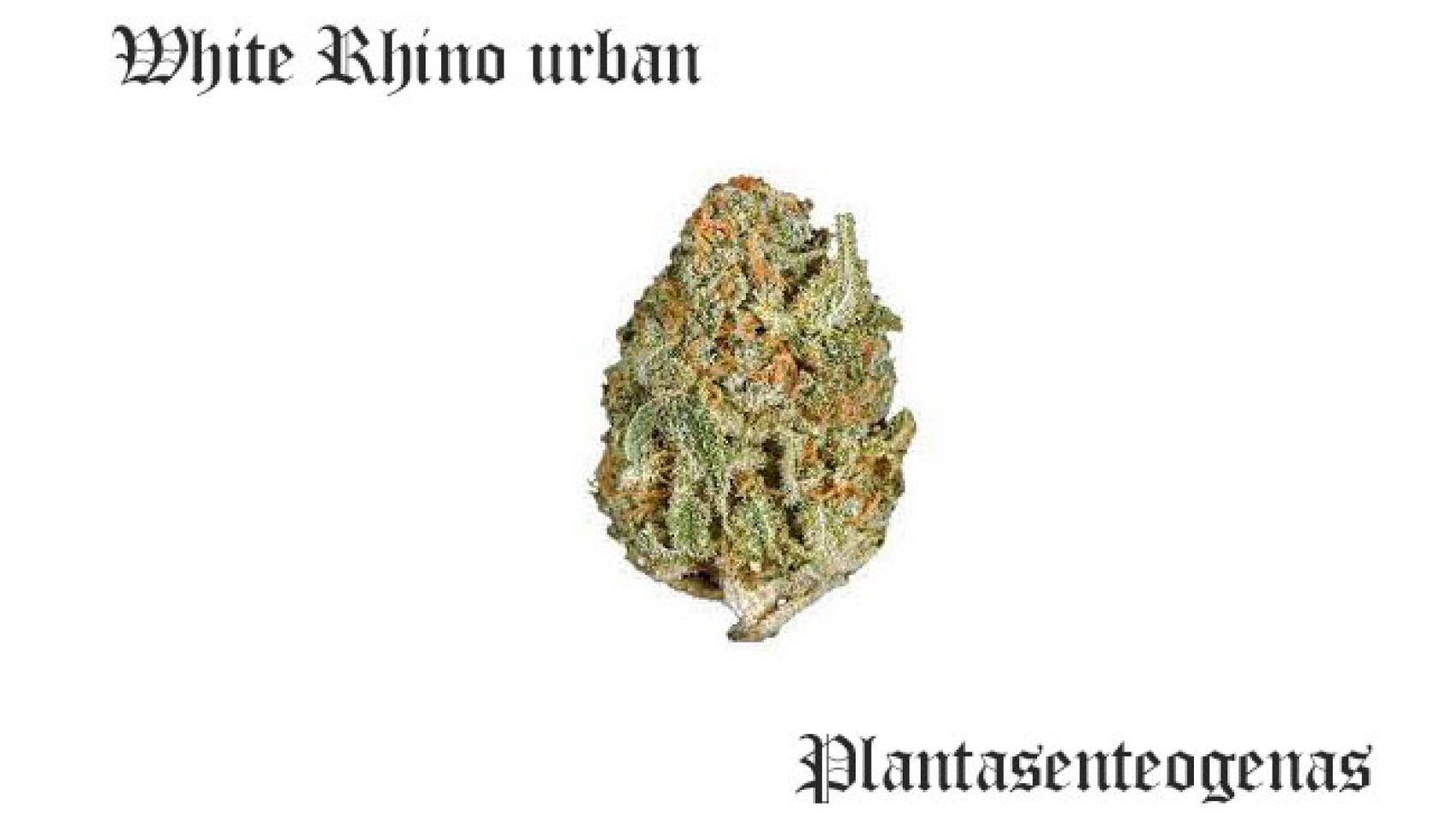 White Rhino is a hybrid marijuana strain bred from White Widow and North American Indica, resulting in a bushy and stout plant. This strain is said to descend from cultivars sourced from Afghanistan, Brazil, and India. White Rhino’s high THC content makes it a popular choice among consumers looking for heavy-handed relaxation and symptom relief.

White Rhino is a strong, fast-growing, near-pure indica strain with ancestry in the same lineage as her more famous relative, White Widow. As the name suggests, this plant is tough and sturdy, with a thick skin for high temperatures as well as cold nights. This strain delivers a knockout, medicinal-grade indica stone.

White Rhino adapts well to any environment, and is known for her massive yields, especially in hydro grows. Green House recommends starting her with a medium-low pH (5.7 hydro / 5.8 soil) that is slowly increased until it reaches 6.5 at the end of flowering. EC levels should be kept under 2.4 in hydro and 2.0 in soil. Plants ripen in 9 weeks, or early October. To really see the rhino’s “white”, let her ripen one extra week.

While these plants flourish in SOG or SCROG systems, they can also be grown in larger containers and allowed to vegetate into bushes. The White Rhino plant has a typical short squat stature, with short, thick branches and extremely compact internodes. She is a smart choice for indoor gardeners with space limitations, or indoor growers looking for a shorter plant. Plants grown in 5-gallon containers will finish at 4-5 feet if allowed to grow vegetatively for at least two weeks. With less veg time, or in small conatiners, plants stay at about 3 feet tall. Even plants with no root limitations finish no taller than 6 feet. When White Rhino is allowed to grow big, pruning is necessary to allow light and air to penetrate the inner and lower areas of the plant.

The leaves on White Rhino are huge, full, and midnight green, and her stalks are very thick. her calyxes are small, round and super dense, forming rock hard colas. While not terrible odiferous while growing, the White Rhino harvest will have a pleasantly sweet smell. The toke is also sweetened with indica berry flavor, followed by a sharp aftertaste and sometimes about of coughing. White Rhino delivers a full-throttle indica stone. The buzz goes straight to the body, giving a rubbery, relaxed feeling that is nearly narcotic. It is a down-tempo smoke that endures, ideal for slow-paced recreation. White Rhino is prized in the medical community for effective relief of chronic pain.

White Rhino is an Indica dominant strain that has won many second place awards but is known to be a first rate strain for producing massive yields. Named for the look of the top part of the plant that resembles the horn of a rhinoceros, this strain provides a strong Indica high. New users are cautioned to try this strain a few hits at a time as it can take a few moments for the full effect of the high to take effect. Once it does, the strain fills users with a euphoria that lifts moods and numbs the body. The bodily effects causes many users to feel lazy and tired.  Accompanying the beneficial effects might be these side-effects, dry eyes and mouth, paranoia, headaches and anxiety.

Like many Indica dominant strains, this one should be used in the evening or at night and can be rather effective at treating insomnia. White Rhino’s numbing effects on the body are sought after by patients suffering from chronic aches and pains. Others choose the strain to relieve stress, anxiety, nausea, migraines and induce appetite.

White Rhino was bred by Green House Seeds and is a relative to another famous strain, the White Widow. The exact genetics are unknown but many believe a White Widow was crossed with an unknown strain from North America. Reportedly yielding up to 900 grams per square meter indoors, this strain flowers for about nine weeks. Outside the strain can produce up to 1200 grams per plant, being ready to harvest at the beginning of April in the Southern hemisphere and October in the Northern.

Coming off of the success of White Widow, Greenhouse seeds wanted to combine the notorious potency of that strain with something that yielded slightly more and was even easier to grow.  The results of that breeding project is White Rhino, a more Indica-dominant version of the Widow.  After the split of Greenhouse Seeds founder Shantibaba from the company, he re-packaged the strain as “Medicine Man”, retaining the original genetics.  Nirvana Seeds is known for creating versions of famous strains, and this is no exception — most people consider the Nirvana version of lesser quality and prefer the Mr. Nice version over any other.

White Rhino is a potent Indica strain, and is easily recognizable with its short to bushy, light green to dark green leaves. The nugs are a hue best described as being silvery white and it is well known for its potency, which comes with a high that is hard and fast, mostly due to the high THC content which ranges from 14-20%. With its background of White Widow and a North American Sativa plant, it’s also known for its powerful aroma, which is a mix of an earthy, bitter, and would like to smell. It’s perfectly common to experience feelings of laziness, happiness, and euphoria after smoking this strain of weed, which is why it’s primarily used in the medical world to treat stress, pain, and insomnia. The primary negative effect of this strain is dry mouth, although dry eyes is a possibility. This strain is also known for being particularly durable, being able to be grown in extreme climates.

Not really known for its flavor or smell, it’s mostly a musky vegetal smell.

Hashy and a bit harsh normally, with some phenotypes/plants producing a more lemon taste.

Very potent and resinous, White Rhino takes after its Afghani father, with a strong and sedative body effect that comes on quickly after first hitting the eyes.  Borderline narcotic, it’s best as a nighttime or lazy day medicine, as it can become difficult to do much of anything while in its grip.  Strong sedative qualities make this strain a good medical choice for mental and physical relaxation, anti-anxiety, sleep aid, and pain relief qualities.