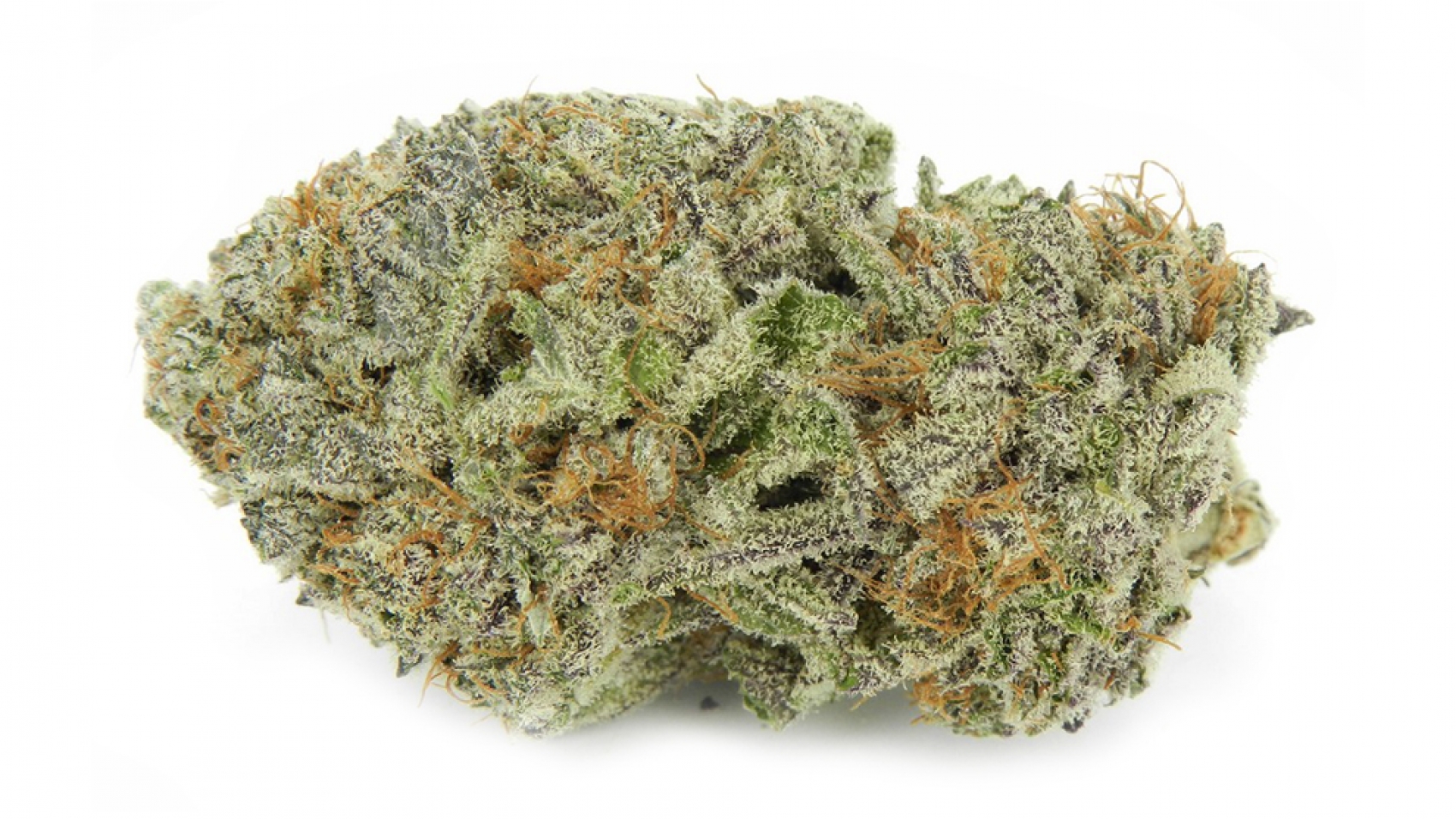 The White Rhino strain is an indica-dominant strain that largely resembles the horn of a rhino. Being the child of the White Widow strain and looking like a rhino horn, its name origins become clear as day. This strain is ideal for those seeking a relaxing and sedating high and can offer relief to those suffering from insomnia and nerve pain disorders such as fibromyalgia.

For virtually every marijuana smoker, seeing a strain of cannabis that begins with “White” will immediately make them think of the classic White Widow, easily one of the most popular strains to ever come out of Amsterdam.

However, as with all marijuana varieties, there is a variety of different offshoots of even the most famous strains.

One example of these offshoots is White Rhino, originally a cross between White Widow and a mysterious strain from North America. This strain possesses similar effects to its genetic relative White Widow but offers far higher concentrations of THC, as well as a massively improved yield.

Let’s take an in depth look at the White Rhino strain, including its flavors and its effects.

What is the White Rhino Strain?

White Rhino is a versatile strain with strong indica leanings that has a whole host of second place victories under its belt in a myriad of different indica competitions.

This oddly titled strain – originally named because of its unique, horn-like plant top that resembles a very aggressive rhinoceros – is well known for its immeasurably potent highs, as well as its distinct flavor.

White Rhino is another one of those strains with a mysterious parentage; though we do know that White Widow is its direct ancestor, we have no idea what other strain was used to create this potent indica. Even in this modern age of enormous attention to detail, there are still some strains that slip through the cracks.

Though marketed as an indica, White Rhino is a Hybrid strain, offering about 80% indica genetics and 20% sativa. This means that you can expect a small amount of sativa effects to follow its expected indica influence, allowing for a small cerebral high to follow your mellow body high.

The high that accompanies White Rhino is quite famous for its slight delay trigger, giving the user the sensation that their bud is somehow defective. However, after a few moments, the full effect will quite suddenly hit you.

The first experience will be one of intense euphoria, as well as a general numbness of the body, but still providing a pleasant sativa buzz to alongside it. This is followed by a satisfying sensation of peace and tranquility, as well as the somewhat overwhelming desire to take a gentle nap.

The relaxation caused by White Rhino is fundamentally different from most other indica strains, however; while many strains give you a sense of peace and an intense desire to watch some trashy TV show on repeat, there is an inherent sense of purpose to the high provided by White Rhino.

You can expect to feel overall euphoric and relaxed, but still motivated to consider the world around you. If it weren’t for the sleep-inducing effects of this strain, you would likely feel motivated enough to go for a long walk or even finally go back to lifting weights.

However, the sensation of tiredness usually prevails, allowing White Rhino to be of great benefit to those who struggle to get to sleep at night.

Due to these soporific effects, it is best to keep White Rhino as an evening strain so as to not risk nodding off during the day. The mild tingling sensation that usually accompanies the high will not only soothe and relax you, but also leave you feeling oddly warmed and satisfied.

To go along with this tremendous high, let’s take a look at its aroma, flavor, and appearance to find out if it is interesting enough to enjoy in its own right.

Similar to its parent strain, White Widow, White Rhino possesses a distinctly earthy aroma that is backed up by elements of heavy wood, such as oak and maple.  You can expect to smell the tranquility of an old forest when first cracking up the bud, as well as a persistent sweetness that is not too dissimilar from sweet tree sap.

Once smoked, the sweetness begins to dissipate, being replaced by a profoundly oaken smell that is extremely reminiscent of antique shop furniture.

This simple strain possesses a wide variety of complexities not just in its aroma, but in its taste as well.

Like a lot of other indica strains, White Rhino’s taste is quite similar to its aroma. You can expect a great deal of earthy woodiness backed up by oddly tangy sweetness.

However, White Rhino is a strain whose flavor develops as the smoke progresses. The full taste of White Rhino is an exciting mix of the after taste of the matured oak that you get in the first mouthful combined with the oddly smoky quality you find in subsequent puffs that is strikingly similar to a wood fire.

White Rhino’s taste profile is hard to classify, as it is both reasonably typical of indica hybrids, but also somehow not.

You can expect a surprising mouthful of flavorful smoke whenever you smoke White Rhino, so look forward to enjoying its unique blend of wood, earth and background sweetness the next time you can get your hands on it.

How about appearance? How does White Rhino actually look, both as a plant and in its bud form?

As mentioned, White Rhino got its name thanks to its strangely pointy leaf and bud formations, making it look like a rhinoceros horn leering out from the plant.

Though White Rhino plants tend to grow rather bushy and wide, in keeping with most indica hybrids, it can also grow exceptionally tall as well.

The bud itself is beautiful, with abundant quantities of dripping trichomes that cling to the outer plant, giving it the appearance of having a white sugar coating all along the exterior.

If you want to get the most out of this exotic looking strain, it is best to try and grow it yourself. Let’s take a look at what kind of specialized knowledge you need to try and grow some White Rhino yourself.

White Rhino is a strain that is perfect to try and grow hydroponically, as it will better utilize space efficiently, as well as allowing you to craft a high-nutrient environment.

You are going to want to feed your White Rhino heavily with both nitrogen and potassium, both at the start of planting and throughout its growth cycle.

For pruning techniques, try and keep the plant topped sufficiently by snipping off the very top of the growth now and then to promote lateral growth. You can also try and snip away some of the superfluous growths at the bottom of the plant, as they will generally produce inferior bud.

Keep White Rhino at a pretty standard 68-80 Fahrenheit with a decent humidity level, and you won’t really have any difficulty rearing this classic indica strain. Just make sure you feed it enough!

Once you have planted your bud, you can expect an extremely high yield; one of the many reasons that growers choose White Rhino over White Widow is because its average yield is massively increased.

Another reason is that the cannabinoid content is massively increased as well.

White Rhino is one of those strains with an insanely high level of average THC per plant. With upper measurements registering at 22% and average plant yields at 18%, White Rhino beats a significant number of other indica hybrids in sheer THC concentration levels.

This high quantity of THC is what makes White Rhino a little bit dangerous for inexperienced users – if you aren’t used to the powerful kickback of White Rhino, you might find yourself knocked entirely out of your mind.

This is also another possible argument for why it is called White Rhino – it hits so hard that you might actually think a rhino had attacked you.

Like many other indicas that have been bred for sheer THC intensity, White Rhino does not possess a high quantity of CBD.

You can typically expect around 1% CBD content in your White Rhino; this is actually a little bit more than most high-strength indicas, so White Rhino does offer at least some of the useful medicinal effects that CBD can generally cause.

As a high strength indica hybrid, White Rhino falls under the general category of being extremely useful for mental disorders. A significant number of different strains can tout their abilities at combating conditions like these, such as excess stress, anxiety or depression.

The primary reason is that strains like White Rhino are bred to have extremely high levels of THC, which in turns causes a huge effect on the CB1 receptor in the endocannabinoid system in the body.

This allows the brain to help both mitigate negative feelings and emotions and to encourage the release of serotonin and other helpful neurochemicals.

White Rhino is also useful at helping deal with excess amounts of pain, due to the high quantity of THC’s effects on the brain’s pain detection.

However, by far the most useful medical aspect of White Rhino is in helping to treat insomnia. Like a lot of indicas, White Rhino is excellent at helping encourage users to fall asleep due to its hypnotic, couch-locking effects.

A lot of people have also reported that it is great at treating fibromyalgia and Chronic Fatigue Syndrome, as well as just generally improving the mood of whoever uses it.

Like pretty much every single indica hybrid that has ever been bred, White Rhino has fairly typical side effects as a result of its breeding.

You can expect dry mouth and dry eyes to plague you for a short while after using, often causing an excess of eye rubbing that might leave you with a couple of marks on your eyes if you are not careful.

The second most reported side effect of White Rhino is typically considered to be dizziness – this is a bit different from its other indicas and can sometimes prove a problem for those that already suffer from dizzy spells or otherwise feel especially vulnerable from disorientation.

This is a pretty rare occurrence, however, about on the same level as the usual risks of paranoia and mild headaches. These latter symptoms are typically only present when White Rhino is overused, so you are likely fine if you are smoking in moderation.

Though there are some strains that have pretty powerful adverse effects to go along with its positives, White Rhino is reasonably simplistic in this regard – you won’t really notice too much.

Just like White Widow, White Rhino is a versatile and useful strain, able to not only help treat a myriad of different medical ailments but also to leave you feeling both relaxed and soothed.

With a robust flavor and aroma that is perhaps the closest you will ever come to smoking marijuana that smells like a fresh oak forest, White Rhino is popular among marijuana aficionados that are looking for new and interesting taste experiences.

Whether you are looking for new taste sensations or you are just after a powerful Indica dominant Hybrid that can leave you utterly relaxed and calm, White Rhino is a great strain to try out yourself.

Whether you buy it or you try growing it yourself, make sure you give it a few moments for the high to kick in – it might seem like your bud is somehow defective, but give it time; you will very quickly discover the rhinoceros horns.