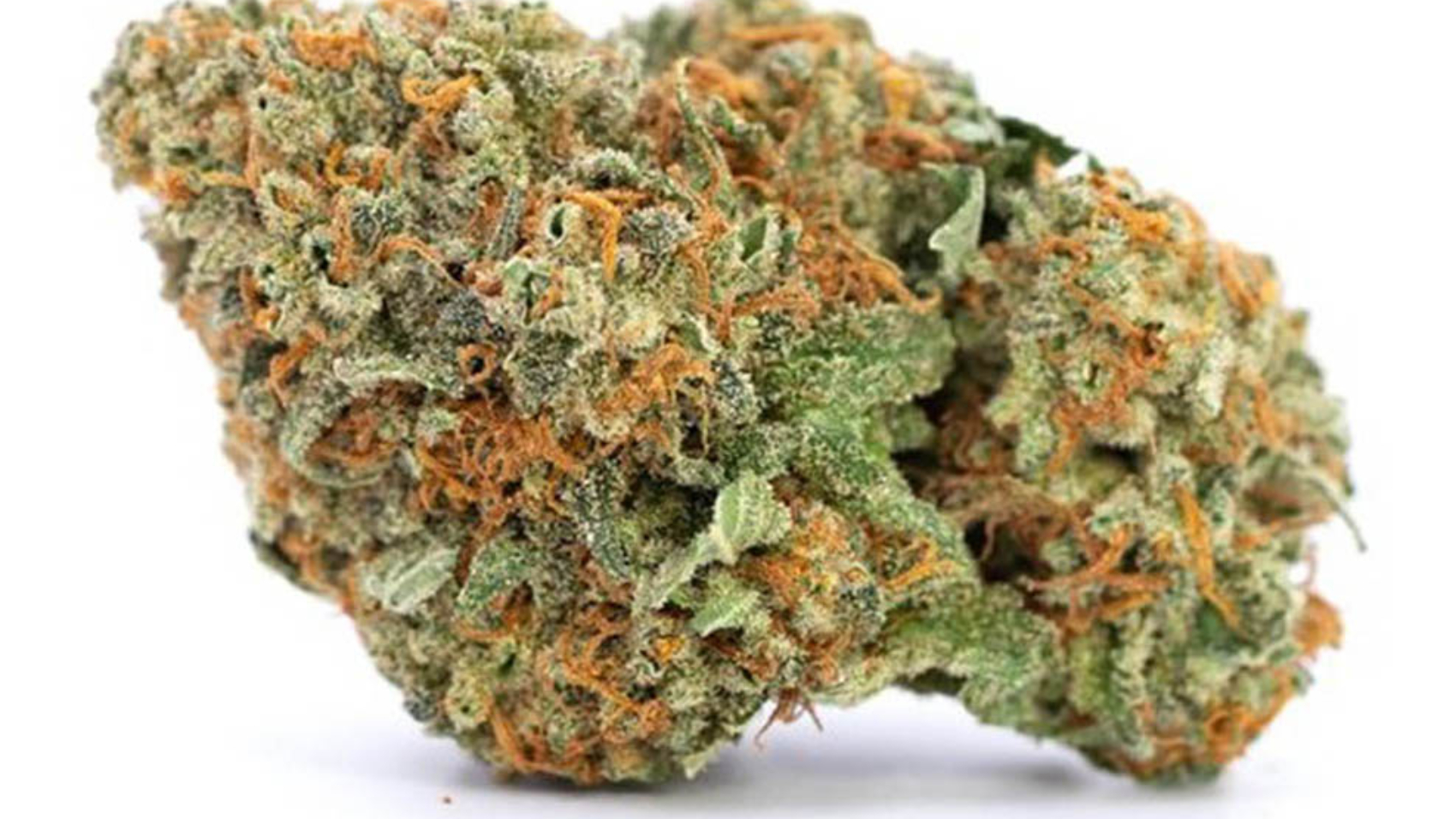 Wedding Cake strain is, perhaps, one of the most potent marijuana strains in the market today. Consistently, it tests beyond the 20% level and borders on the 30%. No doubt, it is a thrill seeker’s strain. Beginners may find its level of potency to be too intense and overwhelming. This is not to say that one should totally avoid the Indica-leaning bud. Rather, that moderation must be practiced at all times.

With that said, bells ring as Wedding Cake’s onset begins. It is usually quick to take effect, blanketing the mind with a rush of euphoria. After hours, it settles into the limbs; kneading it like a masseuse. Depending on the dosage, the comedown could be sedating.

The batter from Girl Scout Cookies was used to develop Wedding Cake. From it, the strain gained its creative and mind-bending cerebral buzz as well as its undertones of violet. Its other qualities, on the other hand, are from Cherry Pie which is renowned for its flavorful buds and long-lasting high.

Wedding Cake induces a euphoric head high that clears the mind after it settles. It improves the mood too, leaving users in a happy place as it ushers away worries and problems.

Its comedown is deeply relaxing. Starting off at the temples, a light pressure makes its way down to the rest of the body. It kneads each muscle free of tension and removes tightness around the limbs. In this way, users can move like a well-oiled machine; improving efficiency in completing tasks.

One thing to remember though is that it each bud contains at least 25% THC and could go beyond. Using more than one’s personal tolerance could lead to an overwhelming head high that stuns users into a couch lock. As such, moderation is essential in enjoying Wedding Cake as a strain.

Wedding Cake’s sweetness is apparent at the first whiff. It exudes a powerful vanilla scent with hints of earth and pepper enhancing the overall aroma.

There is a subtle pepper spiciness that introduces itself upon consumption. It dissipates quickly though as an earthier undertone takes over. Swirling the smoke inside the mouth brings out its vanilla flavors. On the exhale, it leaves a sweet aftertaste.

With Wedding Cake, one can expect the typical dry eyes and cottonmouth caused by moisture-inhibiting cannabinoids. It is mild and, as a result, is often ignored by seasoned users. Beginners who feel the discomfort, on the other hand, may manage the arid spell by staying hydrated.

Apart from that, it is also possible for users to green out from Wedding Cake’s sheer potency. This condition is characterized by a subtle dizziness that could develop into anxiety or a subtle feeling of paranoia as one becomes keenly aware. Thankfully, the side effect can be avoided through pacing and moderation.

Users of Wedding Cake know it is a heavy hitter. Lab results have revealed versions of this strain with a THC content of 27%! We have written before about how a strain’s THC content doesn’t necessarily provide the high you expect.

However, Wedding Cake is every bit as potent as its lab report suggests; arguably more so! We DO NOT recommend this strain if you are a weed-smoking novice. It can send you into dreamland before you know what is happening!

Wedding Cake seldom has more than 0.23% CBD and usually has approximately 0.1%. As a result, it commonly has a THC: CBD ratio of around 250:1. However, it also has high levels of the terpene, beta-caryophyllene, which creates a similar response to high-CBD strains like Harlequin. As the terpene hits the same CB2 receptors, Wedding Cake is an excellent medicinal strain.

Wedding Cake is, no doubt, an impressive recreational strain. Its THC levels induce a powerful cerebral and body high that uplift users and relax the body. However, the presence of its psychoactive compounds and its subsequent effects also have significant therapeutic value.

For one, its happy high doubles as a source of comfort to the chronically stressed and the psychologically distressed. It enhances the mood, eliminates worries, and temporarily pushes back problems in place of a calmer disposition. Simultaneously, it also stabilizes emotions which assists in managing symptoms of depression, anxiety, and PTSD.

It has potent analgesic properties that release users from pains and aches induced by certain health conditions such as arthritis, joint pains, migraines and headaches. Its soothing body buzz kneads the muscles free of tension too. And, as a result, it is also effective against cramps and gastrointestinal contractions.

Another strain that helps with a number of common pains, Hindu Kush is a fragrant and pleasant pure breed that is also an effective tranquilizer.

As a natural alternative to opioid-based medicine, it rarely comes with negative side effects such as nausea. On the contrary, it appeases the stomach and would even stimulate the appetite. Patients with eating disorders such as anorexia could gain back the weight, especially under the guidance of a health professional.

Its sedating buzz eventually takes over and instills a deep drowsiness that, in all likelihood, will lull one to bed. As such, users with insomnia may find a reprieve in the strain. Not only that, it also enhances the quality and quantity of sleep.

Wedding Cake has an Indica-leaning growth profile. It is short and sturdy, allowing growers to cultivate it in various environments. And, at harvest, it produces dense buds that look close to solid. It carries a little bit of weight when placed in the palm of one’s hand. As for its colors, it generally produces a forest green hue that grows darker as it develops a purple undertone.

There is little to no deviation with regard feeding, nutrition, and the usual growing practices. Seasoned growers, however, may use advanced growing techniques like the Sea of Green. This method takes advantage of Wedding Cake’s stoutness and maximizes small growing spaces by sowing at least four seeds in a single square meter then coaxing a single bud as it grows. It shortens the vegetative phase without sacrificing yields.

Pruning is essential when cultivating Wedding Cake. It has dense foliage that grows thicker as more leaves and buds to sprout. Moisture could stick to its crevices and then developing into mold or mildew. Leaving it alone, on the other hand, may lead to worse problems such as bud and root rot. A proficient ventilation system will also aid air circulation in the growing area.

The hefty yielder matures around the ninth week of flowering. But, depending on the conditions, it could flower as early as 7 to 8 weeks. Once ready for harvest, growers can expect between 18 to 21 ounces of buds per square meter.

Wedding Cake blossoms around the second or third week of October, but some growers may begin to see fully mature flowers around the last few days of September. At harvest, one could harvest at least 21 ounces of buds per plant.

Wedding Cake is an intense strain that can help to temporarily alleviate pain, anxiety, and depression. It has an extremely high THC level, and it ‘feels’ like you have just dabbed a concentrate! Although it is a relaxing smoke, it is not for the beginner or individuals with a low weed tolerance.

Some versions of Wedding Cake have a slightly higher CBD content and lower THC level. This may reduce the risk of experiencing side effects. After using it, your mind will feel invigorated, and you may break out into an uncontrollable fit of giggles. Eventually, your body will feel relaxed, and you may slip into a peaceful sleep.