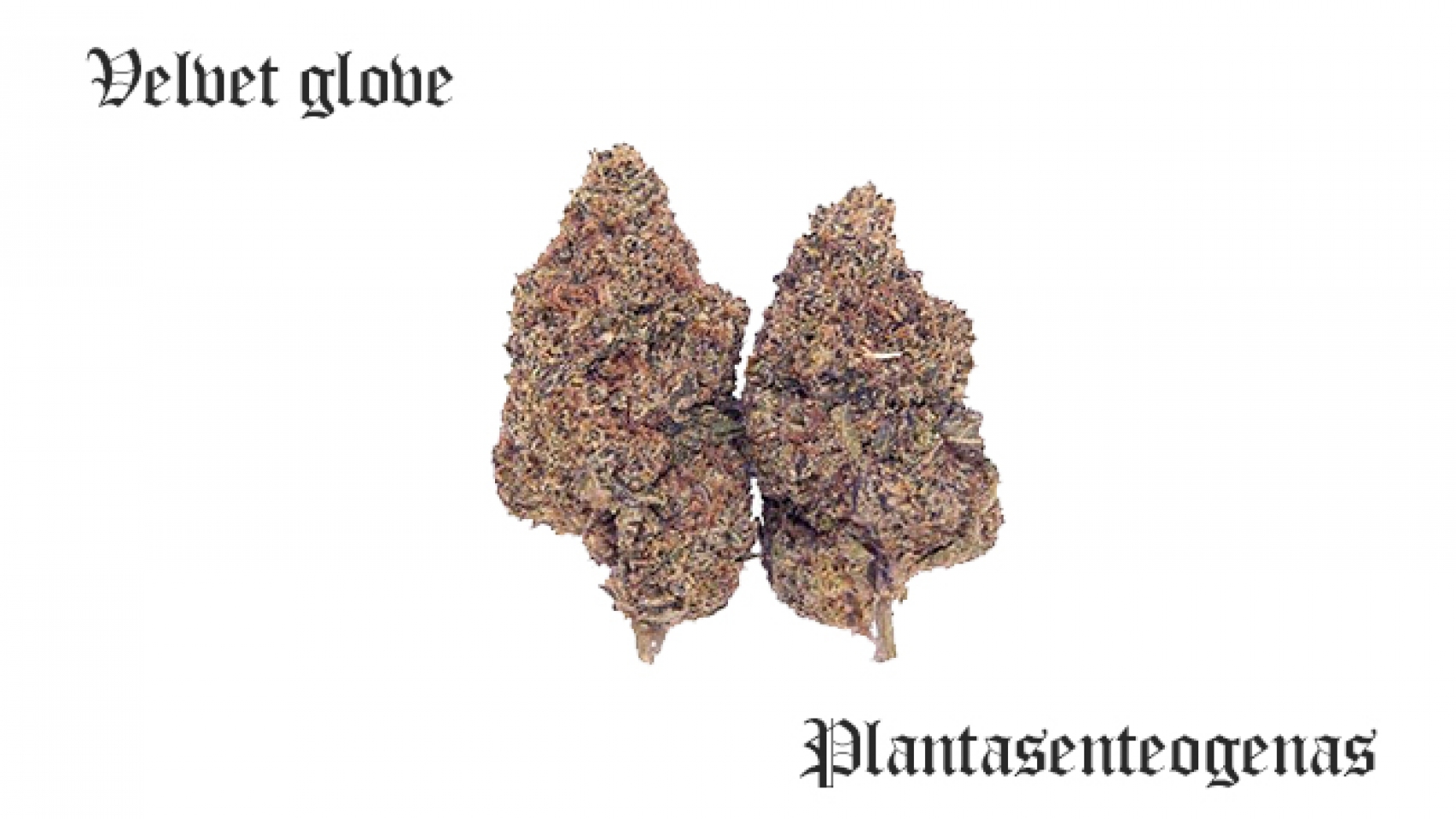 Velvet Glove is an indica-dominant hybrid marijuana strain made by crossing GMO and Nookies. This strain produces fast-acting effects that will make you feel sedated and unable to focus – essentially the classic stoner high. Velvet Glove is ideal for evening use, or during an afternoon at home when you have nothing important to do. This strain features a fragrant flavor profile of diesel and citrus. Medical Marijuana patients choose Velvet Glove to help relieve symptoms associated with chronic anxiety, insomnia, and depression. Growers say this strain grows in dense, sticky buds with lime green foliage with spots of brown hairs. Velvet Glove was originally bred by Swamp Boy Seeds. If you’ve smoked, dabbed or consumed this strain before, tell us about your experience by leaving a review.

Velvet Bud is a sativa-leaning strain with a drool-worthy flavor profile. A cross between piney hybrid Dutch Treat and staple hybrid Blueberry, this strain offers energetic and focused effects. Better suited to daytime than to nighttime use, Velvet Bud is a good all-purpose sativa for whatever might be on your agenda. This strain’s THC content has been measured at between 16% and 23%.

Velvet Bud is visually very impressive, standing out with medium to large, well-formed flowers. These buds range in shape from roughly spherical to more elongated and cylindrical. Although genetically mostly sativa, these flowers adhere in a dense, characteristically indica structure, with small leaves that curl tightly inward toward their central stems. The leaves themselves are a dark shade of forest green, although some phenotypes can boast surprising flashes of deep purple. These latter colors come about thanks to pigments called anthocyanins, which are activated by cold weather during the growing process. Finally, Velvet Bud’s flowers are coated in resinous trichomes that make them more sticky than velvety to the touch.

Velvet Bud has inherited the unmistakable aroma of blueberries from its Blueberry parent. There’s also a slightly sour and sweet notes lurking underneath. Meanwhile, grinding up these flowers releases an earthy hint of pine. When combusted in a pipe or a joint, Velvet Bud burns with a smooth and easily inhaled smoke. This smoke tastes like lemons and blueberries on the exhale.

Velvet Bud begins to unveil its cerebral effects very soon after ingestion. As they breathe out this strain’s fruity smoke, users may detect some slight throbbing around the temples and eyes as well as an increase in salivation. As this rush of blood to the head begins to abate, some decidedly cerebral effects may set in. Smokers may feel their thoughts moving more quickly than usual. They may also notice that some ideas or concepts take on a new gravity or dimension that might not otherwise have occurred to them. This tuned-in mental acuity can be a good way to accomplish complicated, task-based work; the strain’s sped-up stream of consciousness can also help inspire freewheeling creative projects or brainstorming. Velvet Bud is also characterized by a quick jolt of physical energy that an find an outlet in some light exercise — or at the very least, can inspire the user to get up and out the door. While this strain’s cerebral force can prove disorienting in the wrong set and setting, those reasonably accustomed to a sativa high are typically able to make sustained, lucid conversation. Indeed, the bud’s tendency to amplify a user’s inner monologue can make it a good conversational aid in buzzy social situations. Even as time passes, Velvet Bud’s sativa edge remains strong and isn’t likely to devolve into a deep, grounding body high. As such, it may not be the best choice if you’re feeling agitated or tightly wound. Because of its mostly active, upbeat energy, Velvet Bud is recommended for consumption during daylight; it can pair nicely with morning coffee as a wake-and-bake strain.

Velvet Bud’s attentive, upbeat properties also have a few applications for medical cannabis patients. Its ability to induce focus can be an aid to those with attention deficit disorders. Its subtle uplift in mood may also help temporarily relieve the symptoms of mild to moderate stress and depression. Anti-inflammatory properties, meanwhile, may soothe common irritations like cramps or headaches. Because its cerebral state of mind can easily veer into paranoia, Velvet Bud is not recommended for patients who are prone to panic or who have a low THC tolerance.

Seeds of Velvet Bud are available for sale online. Once obtained, it can be grown indoors or out, although success outdoors calls for a hot and humid climate. Plants tend to grow tall, and indoor growers may need to contain their plants’ height with regular and early pruning. Those looking to bring out the strain’s flashy purple potential should briefly expose their crops to cold (but not freezing) nighttime temperatures just before flowering begins. Velvet Bud’s flowers are ready for harvest within about 9 weeks.

Velvet Bud’s wide-awake and attentive vibes make it a great way to enjoy a trip to the great outdoors. It’s as fun when savored alone as it is when shared with a few like-minded friends.

The medical marijuana industry in Florida has really taken off in the first two years for everyone involved. National players like, MUV dispensaries have moved into Florida and offer premium marijuana products they’ve been selling in other states for years.

MUV aka, Alt-Med, was recently approved by the Office of Medical Marijuana Use (OMMU), to sell smokable flower such as, their famous Velvet Glove Indica strain, which we detail in this article.

We were lucky to catch the MUV dispensary with a fresh batch of smokable flower in stock. The demand for it has been extremely high and the supply just hasn’t caught up yet.

Since we’ve tried ordering flower from MUV a couple of times before without being able to get flower, we tried calling the main number and speaking with a MUV rep.

That was great because she informed us that MUV in Wellington, our local dispensary, just re-stocked several smokable flower strains.

Velvet Glove strain smells surprisingly fruity with a diesel finish and impressive expanding qualities once in the lungs. The taste of blueberry, fruitiness seems to permeate through all of your senses.

You can definitely smell the limonene and caryophyllene as well as myrcene of course, but wow does it smell like a family of skunks set up shop in your house as soon as you open it.

The physical and cerebral relaxation from this strain is quite soothing and I’m so glad to have finally grabbed some after hearing all the good feedback. I’ve always had a feeling the skunkiness to a strain meant something more; that terpenes could only play so big of a role in the flavor and smells of different cultivars. @strain_games enlightened me as to what thiols are and that they’re contained in this and other skunky, gassy strains like Darth Revan that give them their unique profiles. Go check out his page for quality content and reviews!

You can find out more information about Kandy Kush here