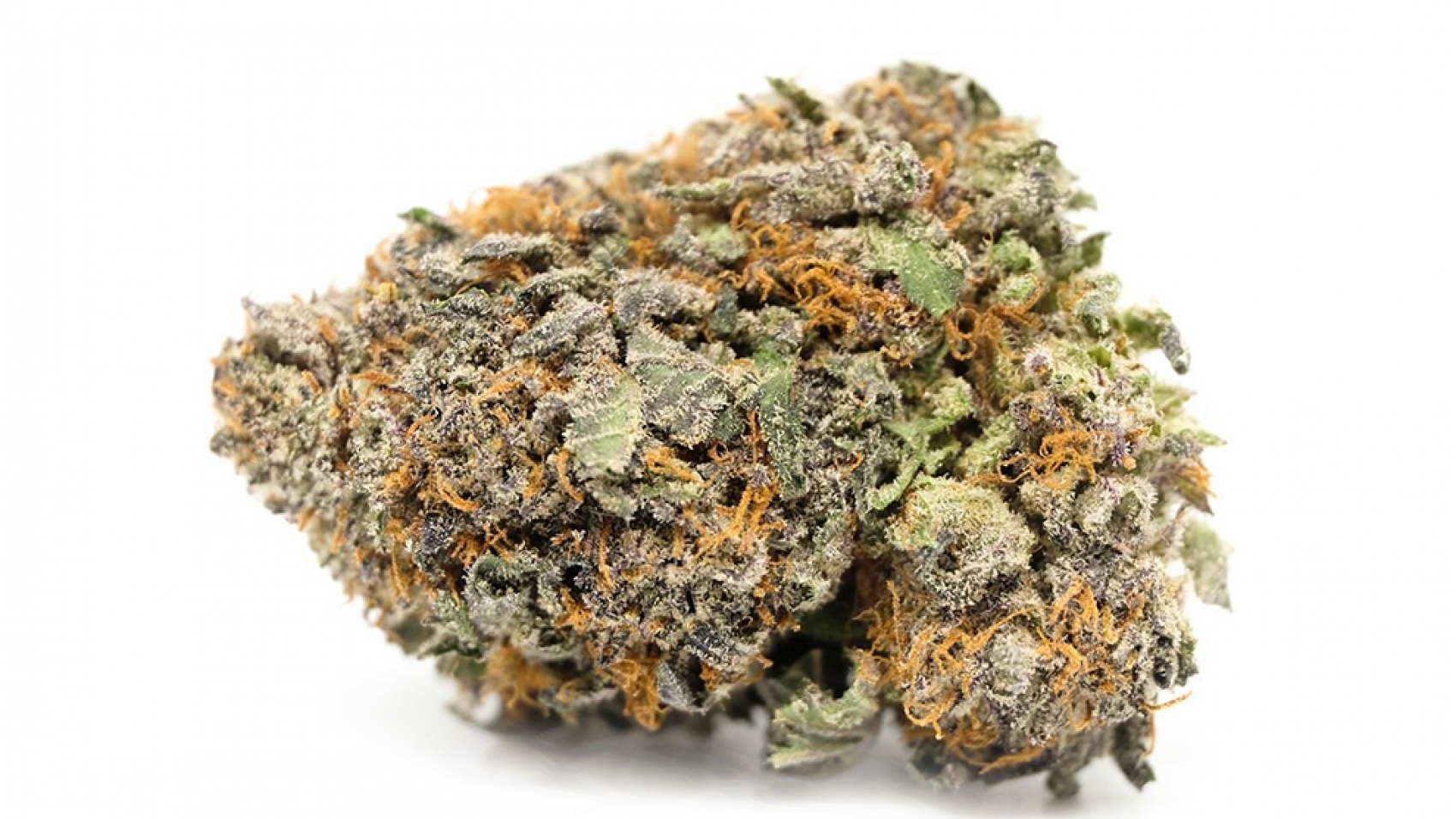 If you’re a Star Wars fan, you know all about the villainous Darth Vader. However, Darth Vader OG is not nefarious at all. In fact, it has some beneficial effects, including helping with sleep, mood disorders, and ADD/ADHD. This strain also has an indoor growing period of 8-9 weeks, perfect for anyone looking to grow an effective and fast harvest.

Cannabis strains get their names for all sorts of weird and wonderful reasons. Sometimes it’s the scents and tastes that award strains their names, and other times it’s their coloring. Other times still, breeders give names based on things they like – just because it sounds cool!

We have to admit, Darth Vader OG is a pretty great name for weed. It sounds badass from the off. However, the Darth Vader OG strain more likely got its name due to the dark coloration of its buds. This beautiful plant is really a sight to behold.

Read on to find out more about this striking strain of weed and whether it’s something you should look to grab for your next smoking session.

What Is the Darth Vader OG Strain?

Darth Vader OG is an indica-leaning hybrid. Its effects are pretty typical of a standard indica, but with a subtle hint of sativa thrown in.

The origins of this strain are quite mysterious. Darth Vader OG strain weed may be a member of the famed OG family. Its name indeed suggests so. Various other strains have been named as possible parents of Darth Vader OG, including Skywalker OG, OG Kush, Purple Kush, and landrace strains from Afghanistan. In all likelihood, we will never know for sure.

It seems pretty likely that there is some Kush genetics in there somewhere because Darth Vader OG has some gentle diesel and skunk notes often attributed to this family.

Darth Vader OG is becoming a pretty popular strain among cannabis connoisseurs. There are plenty of reasons for this, including the delightful tastes and pleasant effects of the high. Another likely reason, however, is that it’s a pleasure to grow. Not only is it reasonably straightforward, but the rewards of producing a stunning dark purple bud are tremendous.

So, without further ado, let’s find out more about this intriguing strain. Does it have a dark side?

Part of Darth Vader OG’s allure is definitely its taste. Plus, it has a lovely scent to match – and we’ve already mentioned how nice it is to look at. Let’s check out what it is that makes this strain such a delight.

The best way to describe the scent of Darth Vader OG is to imagine a stepping into a flower garden early in the morning. Add the earthy and floral scent the sweet and spicy hints and there you have it. Not the best smelling strain, but this hybrid is acceptable to most cannabis connoisseurs.The best way to describe the scent is probably ‘acceptable.’ So, how does its taste compare?

One thing to be happy about is that this hybrid tastes better than it smells. Generally, its fragrance carries over but with a more herbal tone, which actually makes it pleasant to the palate.!

Appearance is where Darth Vader OG really makes its mark. The terpenes and plant compounds which cause the grape and berry flavors have a lovely side effect of turning weed black. Namely, it is anthocyanins which cause this coloration.

Anthocyanins are a flavonoid. They provide a sweet berry flavor which many breeders – and users – find desirable. However, they also cause pigmentation. Anthocyanins can turn cannabis shades of purple, sometimes so dark in the hue that it looks black.

Not all Darth Vader OG buds are black. This coloration appears when the plant experiences colder temperatures during growth. You might come across Darth Vader OG samples which have the very typical green color of most pot. If you’re lucky, you’ll get to experience a bud which has a mottling of dark purple coming through between the greens.

There may also be a smattering of orange thanks to the pistils of the plant. These are the organs which allow plants to reproduce, and they just so happen to add another attractive dimension to the bud.

All in all, Darth Vader OG is definitely a nice-looking strain – one that you might want to try your hand at growing.

Darth Vader OG continues to be enigmatic regarding its cultivation. There is not a whole lot of precise information, but it is generally considered an easy strain to grow. This is largely based on its supposed lineage from the Kush family.

This strain can be grown both indoors or outdoors. It does well in a reasonably warm climate, so if you live somewhere cold, then it’s best to opt for an indoor grow.

Darth Vader OG has a very typical indica structure, growing short and sturdy. You definitely won’t need to use stakes, because its stalks are quite robust. The short stature of Darth Vader OG makes it ideal for an indoor grow op. However, you might need to practice topping.

Topping is a low-stress training (LST) technique in which you chop a small part off the top of the plant. This will encourage the plant to focus its energy on lateral (outward) growth, allowing leaves at the bottom to gain access to light and develop fatter buds.

If you do choose to grow inside, then use a light with at least 600 watts during the flowering period to increase the yield. Speaking of yield, Darth Vader OG will reward your efforts with around 350 grams per plant.

Darth Vader OG has a flowering period of 8-9 weeks. If you grow this strain outdoors, you can expect it to flower in the early weeks of October.

As we mentioned earlier, reducing the temperature during the flowering period can lead to purple hues developing on the buds. However, due to the lack of specific information on this strain, we recommend leaving temperature shocks to the experts. If you have never grown your own weed before, perhaps you’ll have to settle for green (but still delicious) Darth Vader OG.

Our best estimate is that Darth Vader OG should be ready for harvest in as little as 8 weeks. During this time, the estimated 12 ounces per square meter yield is a conservative figure. In other words, there is a good chance that it could be more.

Most likely, this plant is ready for harvest sometime during the first to the second week of October. Again, we are making an assumption here and it is possible that the actual yield of Darth Vader OG is much higher than 12 ounces per plant.

Darth Vader OG cannabis has an average to high THC content. At its lowest, it has about 18% THC, which would be considered a relatively average amount. Some samples have tested at 25% however, which is pretty high.

Since the THC amount can vary quite drastically from one plant to another, we recommend exercising caution when using Darth Vader OG. If you are new to cannabis, make sure you are in a comfortable setting with people you trust.

As usual with a strain with plenty of THC, Darth Vader OG has very little CBD to speak of. The CBD content varies between 0.18% and 0.37%. There is still a tiny amount, as you can see, but it’s nothing to get excited about.

Darth Vader OG has very typical indica effects. The high will have you feeling relaxed and sleepy in no time, longing for a soft bed to lie on. With these effects in mind, its therapeutic potential becomes pretty apparent.

Many people use Darth Vader OG to treat sleep disorders like insomnia. Just a few puffs, and you’ll be sent off to dreamland within a few hours.

Before you fall asleep, however, you’ll find a few other benefits. For one, Darth Vader OG is said to melt away stress. If it’s stress and anxiety that are stopping you sleeping, then worry no more. Many medical marijuana users turned to the herb due to mood disorders like these, and Darth Vader OG could be a great way to settle your mind. A few users have reportedly used Darth Vader OG for ADD/ADHD.

The relaxing indica effects are also useful for pain. As your muscles begin to relax and release tension, the pain simply dissolves. You will end up in a state of couchlock, though. Darth Vader OG will chill you to the point of no return, and you definitely won’t want to get up any time soon.

Reportedly, this same muscle relaxant effect can also help with muscle spasms. This strain could silence twitches and spasms that come as a result of several disorders.

A final, perhaps unexpected, effect of Darth Vader OG is its ability to relieve eye pressure. Glaucoma is a condition which appears on most medical marijuana lists because it has been suggested that weed can alleviate intraocular pressure. Darth Vader OG, it seems, is one of the best strains for doing so.

Possible Side Effects of the Darth Vader OG Strain

Nothing is perfect, and the same is true of Darth Vader OG. Amongst its number of benefits, there are also some drawbacks.

First of all, you can expect to experience a dry mouth. This is a side effect of pretty much any cannabis strain. It’s more or less inescapable, and any seasoned marijuana smoker will be used to it. Some users also experience dry eyes – but to a lesser extent. Dryness can be combatted using a glass of water and a damp cloth. If you have eye drops, you can use those. Remember to keep these to hand before you smoke, because Darth Vader OG won’t let you get up to fetch them!

Another commonly reported side effect is dizziness. Several users of Darth Vader OG have reported feeling a little dizzy. If this happens, simply sit down and relax. Trust us; you’ll want to be sitting anyway!

Finally, it is crucial to be cautious of the THC content. In samples with a higher THC content, users may experience anxiety and paranoia. This is more common with individuals already prone to these feelings, and also those who have a low THC tolerance. If you are not a seasoned weed user, go low and slow at first. Don’t overindulge, because that increases the likelihood of triggering these side effects.

Darth Vader OG is a great strain to try out if you haven’t already. Not only is it beautiful, with its dark tones and purple coloration, but it also tastes delicious. The notes of grape and berry, undercut with the familiar diesel tang of cannabis, is quite a pleasure.

Not only that, but this strain also has a few excellent medical benefits. MMJ users like to use Darth Vader OG for many positive reasons. The side effects are also fairly predictable, so as long as you are prepared, you’ll get along with Darth Vader OG just fine!

Darth Vader OG is an enigmatic strain with mysterious origins. But trust us, it’s not a strain you want to miss out on. Have you ever sampled some for yourself before? What did you think? Let us know in the comments.