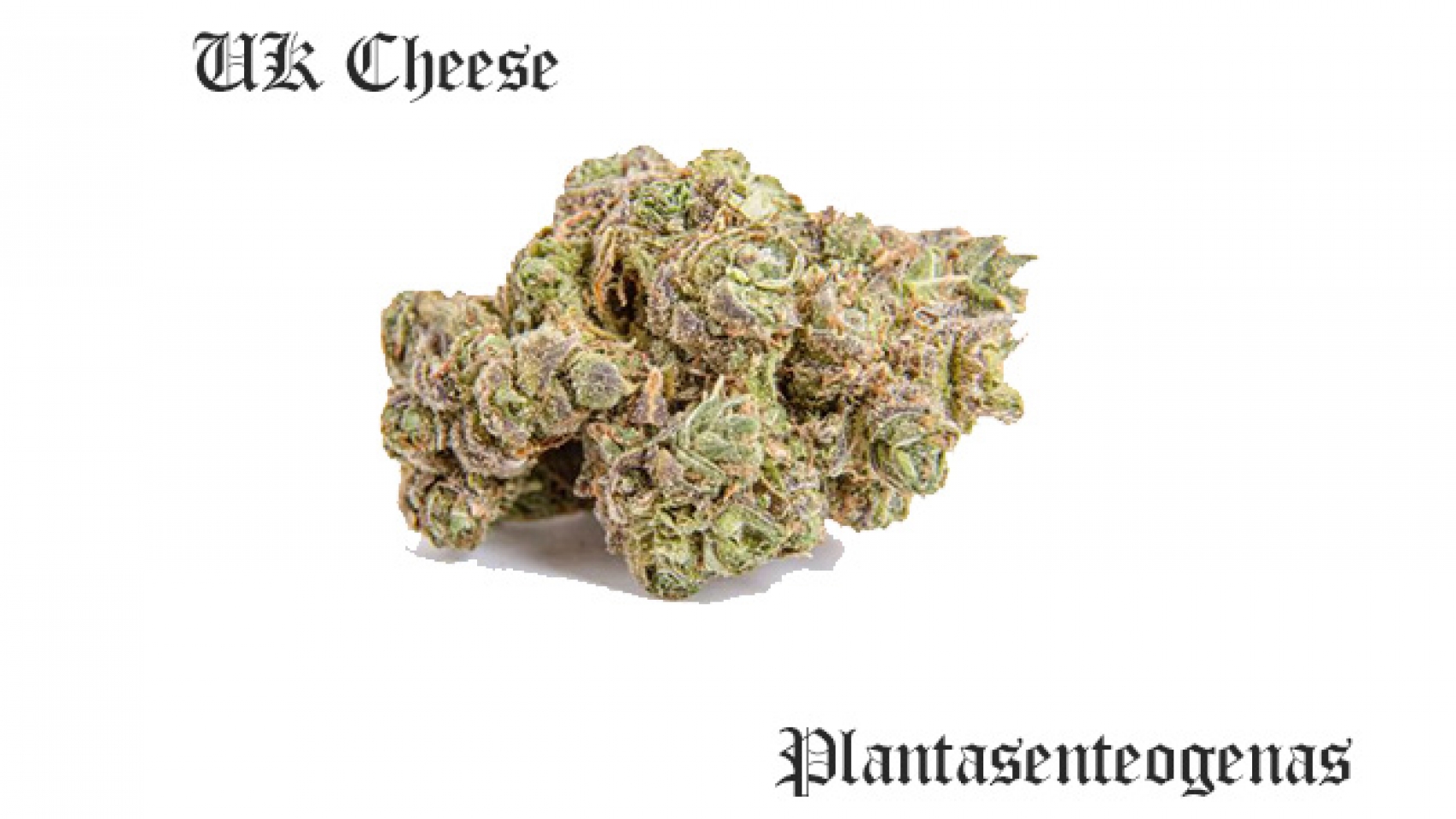 UK Cheese is a potent hybrid marijuana strain and phenotype of Skunk #1. This strain provides energetic, euphoric effects that allow for mental relaxation without sedation. Medical marijuana patients choose UK Cheese to relieve symptoms associated with chronic pain, insomnia and inflammation. This strain features a flavor profile that is unique, with undertones of berry and spicy cheese. Growers say UK Cheese has dense nugs that are light green and coated in orange hairs. This strain was originally cultivated in the early 1990s by a UK collective group known as “Exodus”; as a result, this strain is also known as Exodus Cheese.

Cheese, as it’s also known, is perhaps the most famous marijuana strain to emerge from the British Isles. It is still more popular in the UK than anywhere else, although its fame has spread to many other parts of the world. English farmers created this strain by inbreeding Skunk #1, a sativa-dominant hybrid. UK Cheese itself is indica-dominant, with a sativa/indica ratio of 20:80, but the effects are balanced, delivering both a head and body high. It’s a potent strain, with THC levels topping out at about 20%, and it’s known to hit fast and hard. The effects are intensely euphoric, with an upbeat, happy mood, some laziness, and a dose of creativity. Best used to treat pain and stress, UK Cheese is also an effective way to alleviate insomnia and depression. CBD levels are low, less than 1%, so this isn’t a good choice for patients with seizures or other disorders that respond to CBD. Cottonmouth and dry eyes are common side effects, and paranoia, headaches, and dizziness are also reported. Fittingly, this strain smells and tastes like cheese, with a pungent earthy aroma.

U.K. Cheese is also known as Exodus Cheese and has large, fluffy buds that adhere in an elongated, roughly cylindrical shape. The flowers’ loose, sativa-like leaves spiral off of their calyxes. It’s a hybrid strain that originated with British breeders Exodus. When cured, these leaves are typically a dark shade of forest green and are twisted through with orange and brown pistils. Finally, a relatively sparse coating of sticky trichomes covers these buds and gives them a wet, dewy appearance.

This strain is notoriously pungent – it gives off a powerfully tangy and slightly sweet odor, like aged blue cheese. Breaking the buds apart yields more damp, earthy notes. These contrasting scents make for a strong, sour taste that some users describe as unpleasant. After exhale, a sharp tang may linger on the palate. Those consuming in public should note that U.K. Cheese can be a very pungent strain whose odor may carry; anyone concerned with maintaining discretion should take the necessary precautions.

U.K. Cheese has quick-acting, euphoric effects that initially lean towards the sativa end of the spectrum. Initially, the strain make itself known with a subtle tingle around the eyes and temples. Additionally, smokers may sense a change in perception, as certain external stimuli take on new intensity or dimensions. As they adjust to these physical sensations, users report an uplift in mood that is not necessarily accompanied by a strong cerebral focus. Instead of zeroing in on any tasks at hand or any swarming ideas, consumers’ minds tend to become rambling and open to suggestibility.

This makes U.K. Cheese a great way to spice up otherwise mundane chores or errands. In social settings, the strain can also pave the way for stimulating conversations with like-minded friends. Eventually, these happy, floaty feelings progress into a body high that starts off as tingly, as waves of relaxation begin at the base of the neck and spread downward through the core and limbs. As users feel themselves unwind, they may notice that deep breathing happens more easily and that any muscular tightness is loosened. As the high progresses or as dosage is increased, couchlock becomes more and more likely. In its later stages, U.K. Cheese can be helpful for kicking back after a long day or week of work. Because of its two-stage high, this bud is best enjoyed in the afternoon or early evening when smokers can fully savor the decrescendo into motionless relaxation.

The legend Of The UK Cheese strain

The legend of UK Cheese starts around the year of 1995, when a Cheese clone was passed on to an alternative community (group) by the name of, “Exodus,” who lived just north of London. This DIY culture group has been around in the UK since the 90’s, and is famous for their free community dance events, city farm, and social housing projects. Their free parties on weekends were known to attract thousands of people from all over.

However, their stance on marijuana is one of the things that caused them to have many problems with the law. The members of the collective protested UK law by outwardly growing and smoking marijuana in public. With heavy traffic through the community, many clones of the original UK Cheese were given out to travelers as gifts.

ts budding notoriety in the UK caused Cheese clones to be passed around an extensive network of growers all throughout the 90’s. Cheese was a clone-only strain for some time, but many phenotypes of Cheese have surfaced since. It is believed by some that the original UK/Exodus phenotype is still floating around in the hands of the most senior of growers. It would be something special to get our hands on a bag of that medicine.

How will The UK Cheese strain affect?

The particular batch of UK Cheese that we had was very sticky, to the point where it was a chore to break it up with our fingers. After resorting to a grinder, we took off the top to reveal a pungent smell that smacked us in the face. This was a one of a kind smell that could only be described as a mix of fresh berries and cheddar cheese.

The taste is akin to the smell; it’s fruity with hints of berries, cheese, and undertones of skunk. Upon exhale, the flavors of skunk and cheese coat your mouth, and lingers between hits. This is when the cheese flavor is most noticeable. The smoke is potent, with a ‘stoned’ effect immediately settling in behind the eyes all the way down to our legs.

It’s 50% Indica and 50% Sativa lineage make the UK Cheese strain a perfect blend of body and mind. After two small bowls we experienced a severe case of ‘couch-lock’ accompanied by an uplifting, euphoric effect. We found it easy to focus and get work done after smoking UK Cheese. Nonetheless, you have no desire to move once you get settled in your chair.

UK Cheese is an ideal strain for patients seeking daytime pain, stress, and anxiety relief without the fear of crashing. It could also serve as an anti-depressant, as it puts you in high spirits after just one draw from the bong (no pun intended). UK Cheese remains one of our favorite Hybrid strains to medicate with during the day.