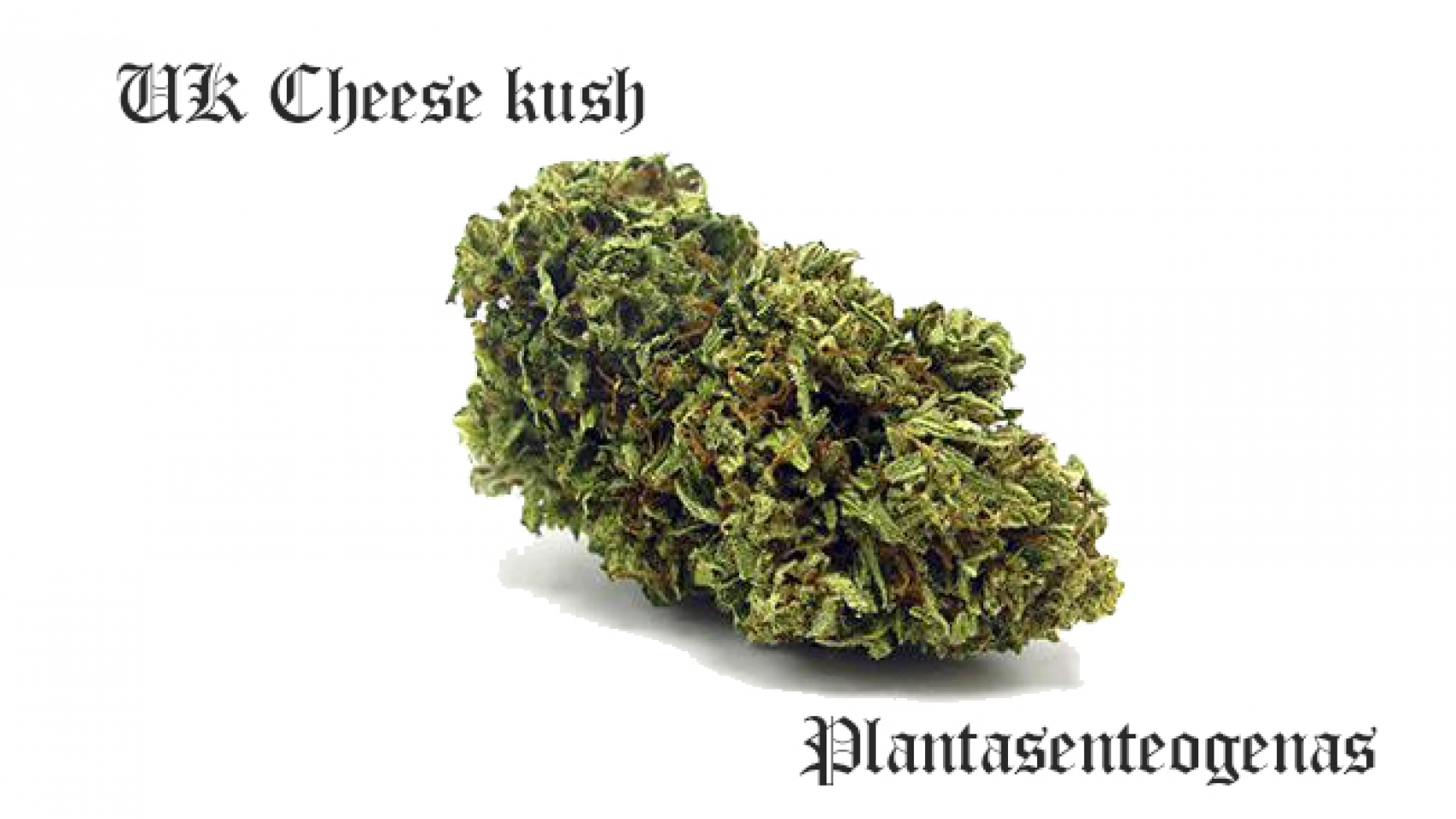 The nicely balanced though sometimes indica-dominant hybrid strain dubbed UK Cheese was named after its cheesy scent and breeding origin. It’s a phenotype of the well known Skunk #1 and was first bred by Exodus in the early 90’s. Not surprisingly, this strain also goes by the name of Exodus Cheese.

Its taste is unexpectedly sweet, with hints of spices and berries as well as the anticipated cheese flavor.

Cured nuggets of the UK Cheese strain are a beautiful display of color, as its light green flowers are tinged with blues that are lightened by the frosty layer of trichomes it produces. Slight shades of violet can be spotted, and vivid copper pistils wind their way throughout its flowers.

UK Cheese THC levels average just below 20% with some coming in at 23%. UK Cheese effects became popular in both the UK and throughout the world because reviewers claimed it increased energy and created a euphoric state of mind. Some said it simultaneously relieved pain throughout the body. Sativa and indica effects are very well balanced in this strain, some have noted. UK Cheese increased alertness while easing the mind of worries for others. Still, some experienced pain relief which came as a welcoming tingly sensation.

What is the U.K. Cheese Cannabis Strain?

The UK is a country well renowned for its cheeses, both its cheddar and its stilton, so it makes sense that there would eventually be a marijuana strain to match this, right?

UK growers Exodus were the ones to originally develop UK Cheese, hence its alternative name, Exodus Cheese. Though the actual growing history of this strain is kept relatively secret, it is mostly thought to be a phenotype of Skunk #1, which was itself made by Exodus.

UK Cheese is a hybrid strain, offering the effects of both indica and sativa in one go. With many hybrids, the effects can sometimes be somewhat conflicting, or it can favor one over the other, but UK Cheese is one strain that manages to create the perfect blend of the two.

UK Cheese has both an attractive appearance and a wonderful flavor, despite its cheesy reputation, so let us first evaluate exactly how it tastes, smells and looks before we consider its beautiful effects.

UK Cheese has an attractive appearance in that its buds don’t necessarily conform to the standard presentation of marijuana buds. UK Cheese tends to create these huge, fluffy buds which grow almost cylindrically, making it seem more like some kind of sci-fi, otherworldly flower than a normal marijuana bud. If you were utterly devoid of smell and taste, UK Cheese would still be interesting just to look at.

However, assuming you are an average person with the regular five senses, the most exciting aspect of UK Cheese is its cheesy smell and taste.

The initial pungency is immediately noticeable, smelling like an odd combination of an aged cheddar and a ripe blue cheese at the same time. Once you start playing around with the buds, you will then start getting a strangely earthy, almost skunk-like aroma.

The flavor doesn’t match this; though there is that initial hit of extreme cheesiness, the overwhelming taste sensation is one of an almost cheesy berry, if that can be imagined. It also possesses a certain sour quality that seems incongruent with the actual flavor and aroma of the bud.

The exhale might cause some sharpness, not too dissimilar from eating an overly tart berry. Afterward, you will notice an aftertaste that will eerily remind you of those somewhat cheap supermarket cheese crisps.

Though this all might sound extremely unpleasant, the whole experience is remarkably enjoyable, offering a unique blend of different flavors that can’t be found anywhere else.

One thing for sure is that you will know when you get your hands on some UK Cheese – the smell is unmistakable once you know what to look for.

UK Cheese is a great strain to grow from clones, rather than regular seedlings.

This method involves taking a clipping from another healthy UK Cheese plant and planting it yourself. This is because the initial rooting stage of the UK Cheese strain can take a bit of time, so it makes it easier if you get a clone that is already partially grown.

Overall, UK Cheese is a pretty decent strain to grow for those inexperienced marijuana growers, as it doesn’t require any advanced techniques. It performs pretty equally well in soil or a hydroponic setup, so you can decide what would be best for your own grow operation.

You can utilize the Sea of Green method of growing to ensure that your plants create a hefty yield, supporting its wide bush with trellises to make sure that it doesn’t drape on the ground.

With a flowering time of about 8 to 9 weeks and a pretty standard temperature requirement, you won’t have any kind of significant difficulty with UK Cheese. Additionally, UK Cheese doesn’t need any special feeding regime; it just requires a moderate quantity of feeding at regular intervals, like most plants.

The only thing to bear in mind is if you are trying to grow UK Cheese surreptitiously; this strain is not extremely secretive. Due to its full bush and its vibrant scent, you will likely be pretty easily noticed by nosy neighbors or anyone with a sharp nose.

Assuming you’ve managed to grow it yourself without any problem, or otherwise got your hands on some from a different grower, what kind of effects can you expect from your UK Cheese?

As a hybrid, UK Cheese offers users a combination of some of the effects from both Sativas and Indicas. At the very beginning of the high, you can expect a sudden punch of euphoria extremely reminiscent of a strong Sativa strain.

You will feel a gradual tingle around the eyes, as well as massive uplift in mood and creativity. This creative drive won’t feel like it is directed at anything in particular; instead, you will just feel like you are almost overwhelmed with ideas and thoughts.

The sativa-like high will eventually begin to fade, only to be replaced by a powerful indica feeling that causes an immeasurable relaxation which might leave you feeling suddenly unable to stand. Couchlock becomes an inevitability after this point, as the relaxation causes you to succumb more and more to the urge to sit down.

You can expect an intense episode of the munchies after an hour or so of imbibing UK Cheese, so make sure you have some snacks on hand.

These effects might seem fairly typical of a hybrid, but their intensity is incredible. All these beautiful effects also lead to some pretty great medical benefits as well, so let’s take a look at what conditions UK Cheese is useful at treating.

As with most hybrids that start with happiness and euphoria and then lead to relaxation, UK Cheese is an excellent strain for helping improve both pain and medical depression.

Pain is mitigated by dominant, high-THC strains, as well as by the relaxant effects of more indica-leaning strains, whereas mental disorders are treated through the application of potent sativas due to their uplifting, serotonin-inducing effects.

You can expect a decent amount of pain relief from UK Cheese, as well as a significantly reduced amount of anxiety or negative thoughts for an extended period after using the strain.

Due to the high THC content of UK Cheese, any condition that is generally affected by THC is helped by this strain, making UK Cheese a great strain to treat inflammation, as well as general fatigue.

Though some sleepiness can be expected as a result of UK Cheese, this strain helps combat that undesirable level of fatigue that results from a chronic condition.

Of course, there are always going to be some side effects with any strain, especially ones with such potent effects.

As lovely as it would be to have a marijuana strain with no adverse effects whatsoever, you are always going to have some unpleasant effects.

With UK Cheese, the principal side effect is dryness. Dry mouth and dry eyes might sound unpleasant, but they are relatively typical side effects of any decently potent strain. For a small unfortunate few, UK Cheese might also cause some headaches that take a few hours to surface, so if you are prone to chronic migraines, you might want to steer clear of this strain.

Other than that, as well as the regular anecdotal reports of occasional spikes in anxiety that any strong strain has, you can expect few other adverse effects.

UK Cheese is an unusual strain, both in its flavor and its effects. Though it initially presents itself as fairly typical in its effects, its extreme potency means that it will always be categorized as a uniquely powerful strain.

Though it does have some (fairly typical) side effects, this strain possesses a remarkable and intriguing flavor combination, offering users a distinctive cheese flavor that you will likely struggle to find anywhere else in the marijuana world.

If you are looking for a potent marijuana strain that not only offers powerful relaxing effects and euphoria but also offers a huge burst of flavor that you can’t find elsewhere, then UK Cheese is a strain you absolutely need to either find or grow yourself.

Though it might be slightly hard to find outside of the UK, it is easy enough to grow.