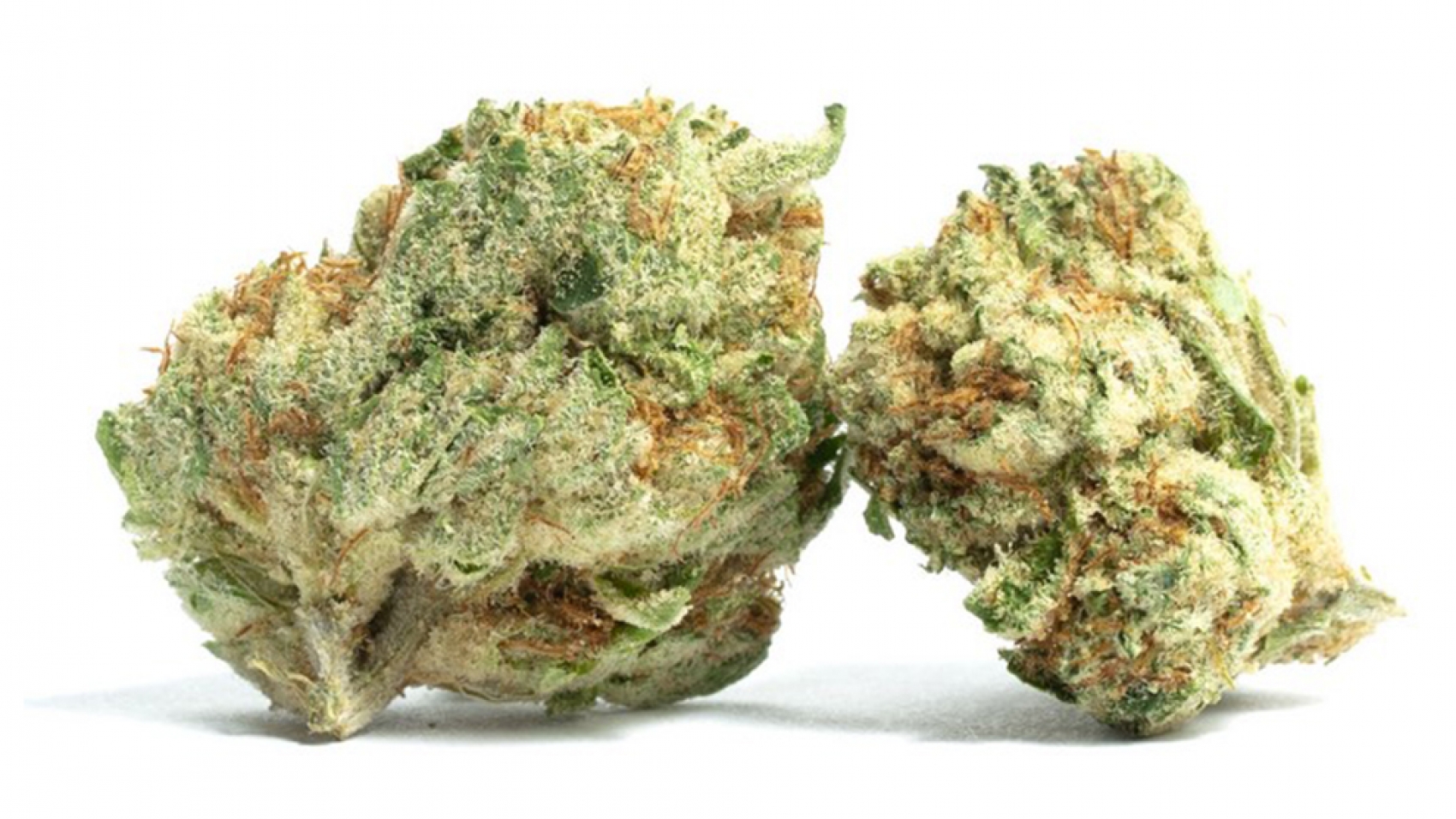 White Cannabis is strain shrouded in mystery. Many experts can’t pin down its exact origins. However, what we do know is that it is a frosty, delightful treat with a powerful high. THC levels can top as much as 30%, making it a challenge for many newbies. However, if you’re well-versed in strains, this may be the one for you.

While this strain’s lineage may be shrouded in mystery, you don’t need to be Sherlock Holmes to figure out how The White strain got its name. This plant is so heavily frosted that it will make you feel like you have been transported to a magical winter wonderland (and that’s before you’ve even smoked it).

Apparently, The White was originally named Triangle, supposedly due to its connection to three of the main cannabis-producing cities in Florida, namely Miami, Jacksonville, and Tampa. Others say it was named Triangle because it is a three-way cross hybrid, but as of now, this strain’s exact lineage is unknown.

What Is The White Strain?

The White plant is very similar in structure to OG Kush, which leads some to speculate that it is likely to have been crossed with OG and another unknown strain. While The White’s appearance is similar to OG and its potency is right up there with it, its distinct lack of flavor and aroma contrasts starkly with OG’s strong, earthy fragrance and taste.

Make no mistake about it, The White is a very potent strain with a high THC level which is offset by a much more modest CBD level, ranging between 0.15-0.25%. Cannabis analysis laboratory Analytical 360 have recorded samples of The White with staggering THC levels of between 25-30%. This is definitely not a strain for a novice smoker to try out – this is one for a more experienced cannabis user to enjoy in moderation.

Due to its potency, The White’s high comes on fast, with smokers benefiting from the effects of both its sativa and indica genetics. Once the initial feeling of euphoria dissipates, the uplifting effects leave you feeling happy and deeply relaxed.

As mentioned already, The White is known for its distinct lack of odor, which leads some cannabis connoisseurs to overlook it for other more fragrant strains. However, this is a mistake, because what The White lacks in aroma it more than makes up for in its positive effects. The White is not completely without a fragrance; the buds do produce a slightly earthy scent when ground up and burned. Also, while The White’s flavors are mild in comparison to other strains, you can still pick up a dank piney flavor on the exhale.

Apart from its potency, The White is probably best known for its heavily frosted appearance. The White’s dense, medium-sized buds are so coated in trichomes that it will have you dreaming of a “White” Christmas. Structure-wise, the plant resembles an OG Kush plant, and also produces a similar yield.

The White is a clone-only strain, which means that in order to grow this plant you will need to use clippings from a mature plant of this variety. The White plant is a pretty high maintenance one to grow. It needs to be fed quite heavily and also requires a significant amount of pruning to maximize air circulation and energy distribution to the upper buds.

It is recommended that you top this plant early to encourage lateral growth. As the plant’s top and “neckbone” sites produce the densest and highest quality buds, it is highly recommended that you heavily prune the lower branches to maximize bud production in these key sites.

Try to withstand the temptation to harvest this plant early. Just because The White plant becomes heavily coated in silvery-white trichomes early in the flowering period doesn’t mean it’s the right time to harvest. Patience is definitely a virtue when growing this plant, as it becomes even more heavily frosted in the later stages of growth.

The flowering period for The White plants is between 8-10 weeks, with the end of September being the ideal time of the year for harvesting outdoors. Indoor growers of this plant can expect an average yield of around 12-16 ounces per square meter. Those growing outdoors will get a more generous return for their time and effort, with the average outdoor yield being around 20 ounces per plant.

Medical Benefits of The White Strain

The White strain offers many benefits to the medicinal cannabis smoker due to the relaxing nature of its indica genetics. This strain is great for people who need to unwind and de-stress while the deep body and mind relaxation effect also make this strain a great choice for people suffering from insomnia. This strain produces such a “body-melt” effect that later in the evening will make your eyes start to feel heavy, and before long you will be drifting off to a peaceful and restful night’s sleep.

The White is also an effective pain reliever too and is useful for treating a number of painful conditions such as arthritis, muscular pain, and lower-back pain. The positive and uplifting effect The White has on one’s mood also makes this strain useful for treating mood disorders such as depression.

Thankfully to its Indica-dominance and high THC levels, this strain is a first-class provider of fast and pure blissfulness. A combination of euphoria and relaxation washes all the negative thoughts in a blink of an eye. The most impressive thing, that it doesn’t make one severely stoned and gives a beautiful opportunity to fall into happiness while covered with a blanket of relaxation. Besides meditations, it can also promote pleasant conversations because of focus enhancement and lots of giggles.

At the same time, all those effects can be an excellent option for alleviating stress, anxiety, and depression. Many people also use this kush for pain-relieving purposes, as well as for treating ADD and ADHD. Moreover, reviewers mark its efficient properties for facing insomnia. Another feature of this strain is its lack of side effects. Nevertheless, when consumed in inappropriate amounts, it might induce dizziness and paranoia due to its high potency.

Possible Side Effects of The White Strain

Due to its potency, smokers of The White have reported experiencing some negative side effects beyond the usual more common ones like dry mouth or dry eyes. Some have said that The White gave them a mild headache, while others have reported feeling dizzy with heightened anxiety and even paranoia. The best way to prevent these negative side effects is by consuming The White weed responsibly. If you have little or no experience smoking cannabis either recreationally or medicinally, then this is not the strain for you.

If you are looking for a cannabis strain bursting with taste and flavor, then you will definitely find more fragrant and pleasing to the palate strains out there than The White. However, if you are seasoned cannabis smoker with plenty of experience smoking more potent strains and are looking for a heavy-hitting strain to counteract the negative effects of stress and depression, then you will be amazed by the White’s effects.