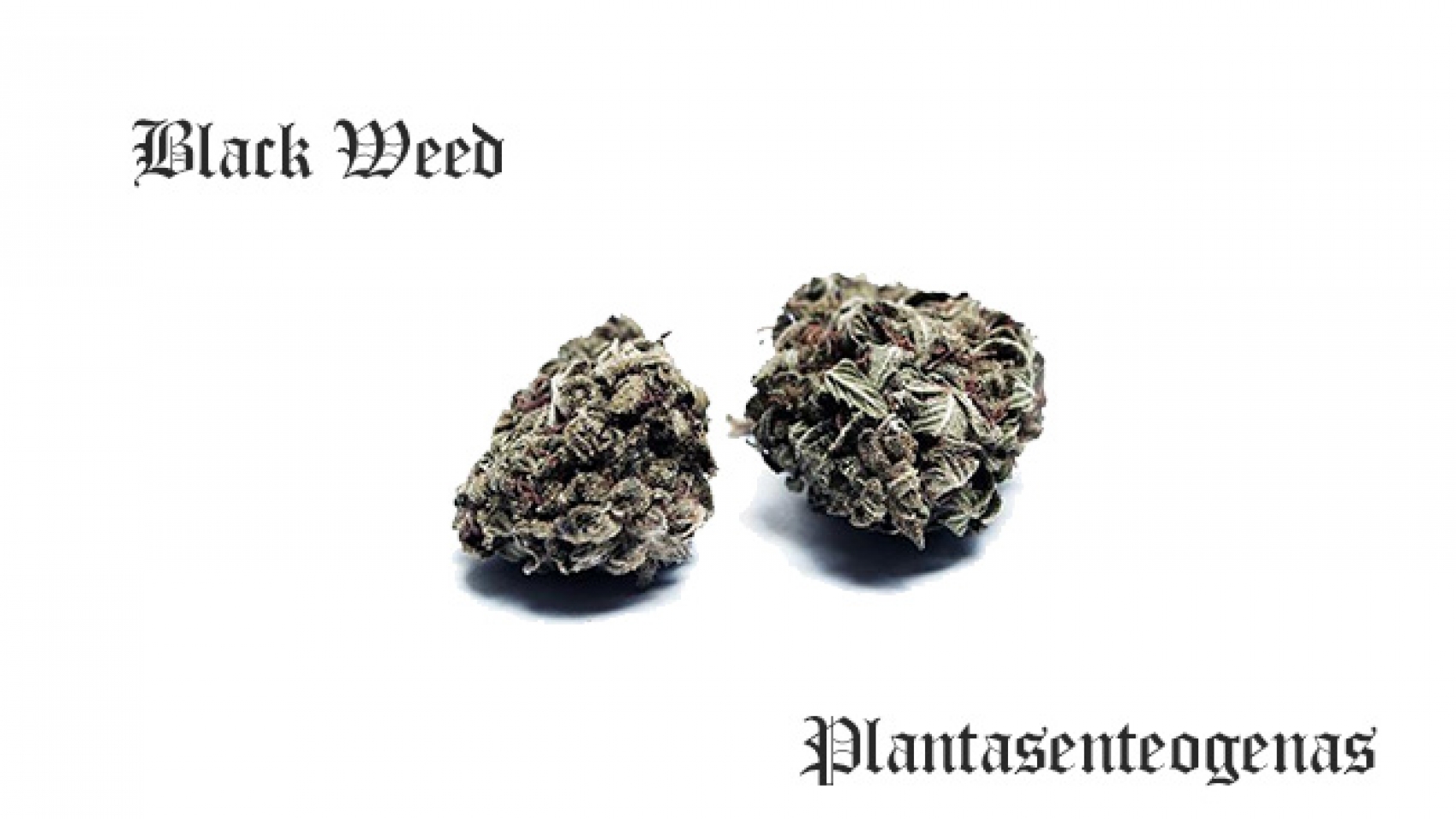 The Black is a strong 90% indica bred by BC Bud Depot. This strain dates back to the late 1980’s, originating in California and on Vancouver Island in Canada. As characteristic of many indicas, this strain is optimally used for pain relief and as a sleeping aid. The Black was named after its unique growering characteristics: frosty leaves turn from a dark purple to black during flowering, reaching maturity between 8 to 10 weeks.

What is Black Cannabis?

The answer to ‘what is black cannabis?’ can be found by delving into the origin of all marijuana plants.

Why the fuck is my weed black? The simple answer is that it is cannabis plants that have turned black or dark purple. You might have heard of such strains in stores or on the street, or you might even be a grower yourself who was startled and surprised to watch your once vibrant green plants get darker and darker. Why does this happen and what does it mean? Don’t be alarmed, it’s perfectly natural. It might even be better for you. In order to understand why black cannabis happens and what it means, we need to start with the origin of all cannabis plants.

Environmental conditions and genetics interact with one another to regulate color. Cool climates stimulate your plants to create more anthocyanin, yet some strains are better able to create this compound than others. For example, certain strains like Black produce deep purple, nearly black leaves and buds, in almost any environment.

The theory is that this particular strain has a recessive phenotype that allows it to better convert glucose into anthocyanins. Hybrids from the Black strain can generate a wide range of colors, from purple to reddish and even white. For offspring to remain black, they would need to inherit a recessive gene from each parent plant.

The Origin of Cannabis

The most commonly cultivated type of cannabis is Cannabis sativa and its subspecies, Cannabis sativa L. The latter is more often referred to as hemp because of its lack of psychoactive properties. Because of the early start of cultivation, many very different breeds of cannabis plants are out there, but whether they are classified as different species is a matter of individual opinion since they can all hybridize quite readily and easily. Most are simply defined by the amount of psychoactive compound and the height of the plant, with taller strains of cannabis deriving from warmer climates and shorter ones from colder climates; However, the conditions in which each individual plant is grown greatly affects the outcome. This is an important fact to remember in the understanding of where black cannabis comes from.

The Origin of Black Cannabis

Nearly all cannabis plants that are grown in warm climates are bright green. Yet when these same breeds of cannabis plants are grown in cold climates, some of them start to show darker colors. Not all of them, mind you, just a few of them. When two of these darker plants are bred together, their offspring will be even darker as long as they are also kept and grown in a cold environment. Some also become darker when experiencing draught or adverse soil conditions. This sort of pattern is a clear signal that it has to do with genetics. The rarity of the trait indicates that it is recessive.

The mathematics behind the genetics of black cannabis are not fully understood yet. However, the fact that the plants that do possess the genes that enable them to become darker under extremes invariably do so indicates that it is beneficial to them in some way.

But why only produce such coloration in the cold, what could be the benefit, and how does it get produced in the first place? The answer to all of these questions has to do with a compound called anthocyanin.

Anthocyanins and How They Work

Anthocyanins are of the flavonoid group of the phytochemicals. Despite the similarity of their name to cyanide, they are actually very good for human health and nutrition. Think of the colors of blueberries, blackberries, strawberries, and grapes and you have the idea of what anthocyanins bring to the plants they are in. They are a strong pigment, giving the plant that produces them its dark, rich hue. The more anthocyanin that is produced, the darker the color the plant or berry will be. They are almost invariably produced by the plant as a response to stress, either chemical or temperature. Ever heard that berries taste better after being frozen? That would be the anthocyanins. The same things anthocyanins bring to berries and wine, they bring to black cannabis.

Some of the proposed health benefits of anthocyanins to humans include:

This all sounds great for people, but what do they do for the plant? The fact that their production is most often triggered by colder climes is a clue. Anthocyanins are natural antifreeze. They help the plant retain water when cold weather would otherwise draw the water out of them, forming ice crystals on the outside of the plant. This also explains why draught is a trigger for anthocyanin production. They also allow the plant to absorb blue and green wave lengths, allowing them to take advantage of low light levels. That’s pretty handy in northern climates. When the weather is warm and conditions are great, there is no need for production of an antifreezing agent or water retention and so the plants become lighter in color or greener and taller.

The Interesting Effect of pH

In addition to the effect of temperature and water levels on coloration of cannabis plants, pH also plays a big role. All cannabis plants prefer soil that is slightly acidic for their optimum growing potential. Interestingly, increasing the pH leads to greater amounts of reddish colors. The more neutral, the more blue coloration will be expressed. An in-between acidity will create purple. Just think about that for a second. Why limit yourself to just green or black cannabis? One could theoretically create a veritable rainbow of cannabis plants simply through slight alterations in soil pH levels. How cool is that?

With all these colors, it makes one wonder if there is any difference between them as far as potency, flavor, and content.

Color’s Effects on the Use and Potency

It is often considered, among those who enjoy the recreational application of the psychoactive effects of cannabis, that the black or darker varieties tend to be stronger. This perception actually has more to do with selective breeding than any inherent increases in psychoactive effects from the pigment. That is, many of those strains that have been singled out for their darker color have also been selectively bred for their higher potency. It’s a case of correlation not indicating causation. The real cause of the psychoactive potency has to do with the levels of a compound called tetrahydrocannabinol, or THC. The more THC present in the buds of the plant, the greater the psychoactive potency. Hemp is the strain of cannabis that was selectively bred for its lower levels of THC and better application in the production of fibers and other material rather than consumption. Other strains have been selectively bred for greater amounts of THC. The color of the plant seems to have been mostly just a secondary characteristic that largely went unnoticed by most growers in warmer climates.

Even though there is no correlation between color and THC levels, there is no denying the causation of health benefits from higher amounts of anthocyanins. The color of black cannabis can still be an incentive for buying. A successful supplier always knows how to get the buyer’s attention. Richer, darker hues in black, purple, and blue are often considered indicators of richer, more robust flavor due to their association with fruits and berries. How many times have you been reminded of the importance of “tasting the rainbow”? And if, along with the health benefits, the psychedelic potency is also stronger, then you’ve just increased your selling points tenfold.

The following strains are known to express black characteristics:

So, looking to create black cannabis? Start with a strain known to produce black phenotypes. Put it under intense light and keep the growing environment nice and cool. Make sure your pH is closer to neutral while still in the optimal pH for cannabis cultivation. Do not overwater.

To keep the black going, avoid hybridization with a non-black strain. Your plants will likely begin to express their color during flowering as the herb ages.