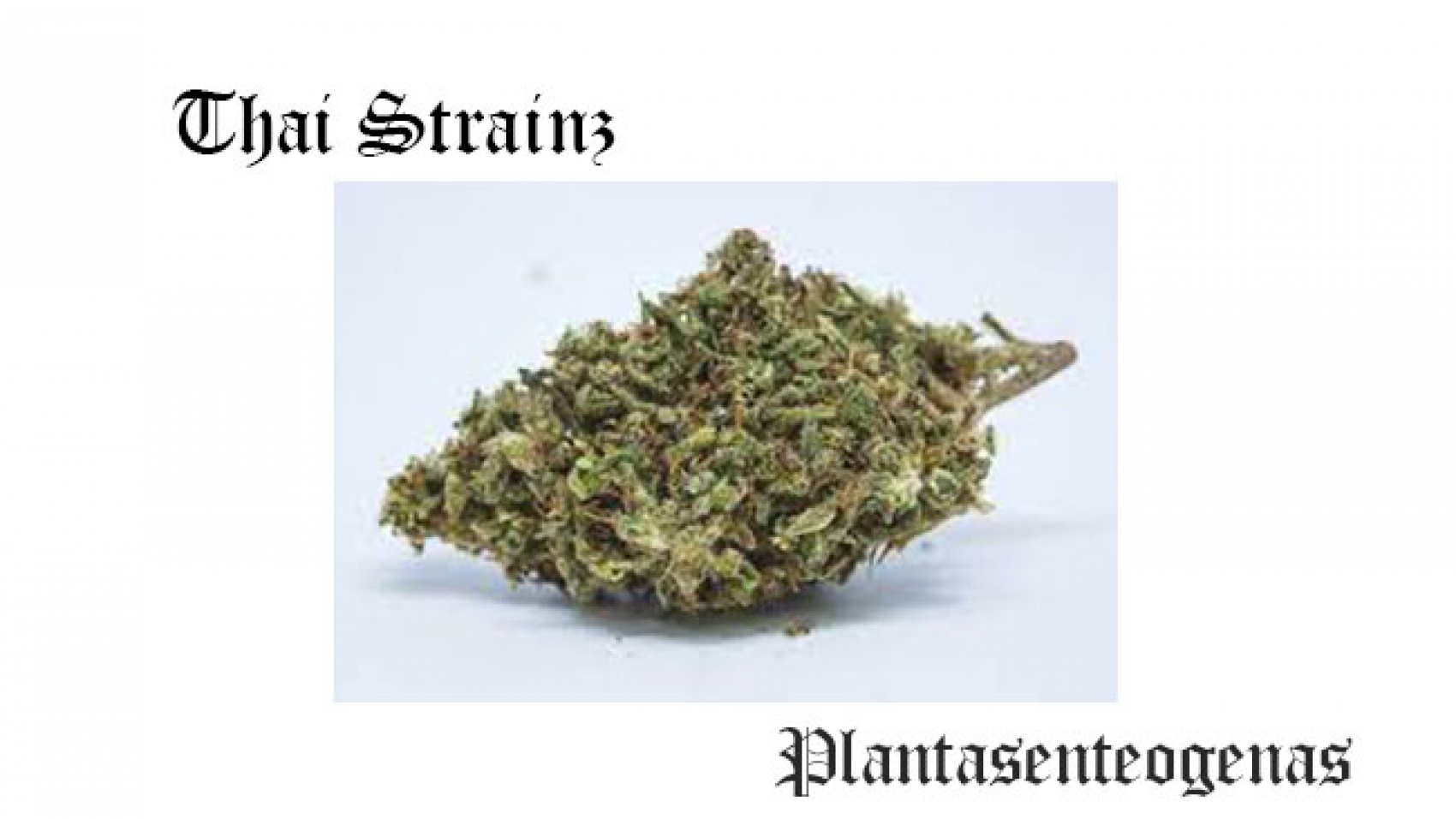 Thai refers to a cannabis variety that grows natively in Thailand and was brought to the U.S. in the 70s and 80s. This pure sativa landrace is sometimes called “Thai Sticks” because of the way its buds are traditionally dried and tied into long sticks. This original Thai variety has given rise to many strains we commonly see on the market today, including Voodoo, Juicy Fruit, and the classic Haze. Thai induces powerful but comfortable effects and has a distinct fruity, citrus aroma. This strain is a challenge for growers outside tropical climates, but greenhouse gardens make this grow possible for experts patient enough for Thai’s long growth cycle and slow flowering.

Thai, also referred to as ‘Thai Sticks’, is an example of a landrace strain, meaning she has evolved in her natural environment away from the hands of man. Nature has cultivated this strain within Thailand for a long time, and the result is a 100% pure sativa variety.

Pioneers within the cannabis industry discovered this variety and brought it over to the US in the 1970s. These pristine landrace genetics were used to set the foundations for many iconic strains such as Northern Lights, AK-47, original Haze, Grapefruit, Chocolope and many more.

The buds of Thai weed are fluffy and contain a THC % of around 20%. If you are lucky enough to get your hands on Thai, she offers a clear headed high defined by cerebral, uplifting and euphoric sensations. Thai flowers give off pleasant smells and flavors of earthiness, woody and chocolate with a citrus/fuel aftertaste.

Growing Thai weed is not an easy thing to do. Thai is best suited to outdoor growth within tropical climates, although expert growers may be able to obtain good results in greenhouses. As often with pure sativas the flowering period of Thai can take forever. 14-16 weeks is quite common for these tropical gifts of nature, but even flowering times up to 20 weeks have been reported.

You also have to take her size in consideration; a fully mature Thai landrace strain is more a tree than a plant.

Thai is a landrace Sativa that has contributed to the creation of many contemporary marijuana strains. This strain is to Sativas what Afghani is to Indicas. Go back far enough in any strain’s history, like Haze or AK-47, and you’re likely to see this legendary marijuana in there somewhere.

“Thai” lineage may actually refer to a collection of cannabis strains native to Thailand and the surrounding region, rather than just one strain alone. Yet, finding a flower labeled “Thai” is still quite common.

Thai is a pure sativa landrace native to the tropical jungles of Thailand. With a potency earned through centuries of isolated breeding, this strain has a famous pungency and an intense cerebral high. Also called Thai stick for its traditional preparation of leaves twisted around the plant’s spindly branches, Thai is said to have been brought to the U.S. from Southeast Asia following the Vietnam War. THC content varies but can be as high as 22%.

Cured Thai flowers look less like buds or nugs, instead forming wispy, fluffy clusters of leaves. They are pale green to brown and very resinous. The smell is primarily fruit and citrus with a distinct diesel undertone. Broken open or burned, the buds have a more bitter odor. The smoke has an acrid taste and is harsher than most sativas – coughing and lung expansion are common. When exhaled, smoke has light herbal and floral notes.

As with potent Jamaican landraces across the Pacific, Thai has a speedy head high. Users describe a euphoria that comes on quickly and lasts longer than average. Physical effects tend to manifest more as an increase in energy that can border on a jumpy caffeine buzz for some. The clearheaded and motivating high from this strain is well-suited to daytime productivity. However, because of its high THC content, the cerebral effects may make less experienced users edgy or paranoid.

Because it is endemic to a tropical climate, Thai is difficult to cultivate outdoors in more temperate environments. Indoor growing can also be a challenge, as plants can reach almost 15 feet at maturity. Commercial growers have had success with large-scale indoor greenhouse operations. Thai has an extremely long flowering time – buds are ready for harvest in December if grown outdoors and after four and half months indoors.

Aroma: The aroma of raw Thai marijuana strains has been described by many as being herbaceous, earthy, spicy, and woody. Sometimes, you can get undertones of pine and a sweet candy smell as well.

Flavor: When smoking Thai strains, you may notice a pungent, diesel-like flavor as well as a woody and earthy taste. Since it is a landrace there will be significant differences in flavor and aroma between plants.

Appearance: Thai strains don’t look like your typical cannabis plants; they have a lot longer, wispy sort of leaves and they don’t really form buds or nugs on their branches as well. They are often light green in color with streaks of brown popping up in between the leaves.

Traits of Thai and Thai Seeds

Some critics argue that the original strain is long gone. While the strain is still spotted in dispensaries and coffee shops, many feel that this is a contemporary version that has been influenced by hybridized genetics.

Regardless, the Thai commonly found is an earthy bud. Hints of citrus and a spicy sweetness hit your tongue on first taste, followed by something more akin to a musky forest. Marijuana connoisseurs will enjoy the spicy aroma that they doubtless experienced in some of this strain’s many offspring. With a smoke harsher than many other Sativa’s, new and experienced cannabis consumers can expect to cough a little when smoking this strain.

As a pure Sativa, this strain represents the essence of stimulating, head-centered cannabis. This strain is energizing, with plenty of psychoactivity to boot. For a landrace, the THC levels of Thai can get quite high. Levels range from 14 to 24% depending on growth conditions.

A racy strain, this strain can be a little too active for those who struggle with cannabis-induced anxiety. Some consumers find that this strain is nearly psychedelic, as it produces a strong sensation of blissful euphoria.

The clear-headed effects of this strain make it a nice option for medical marijuana patients to use during the day to control a number of symptoms.