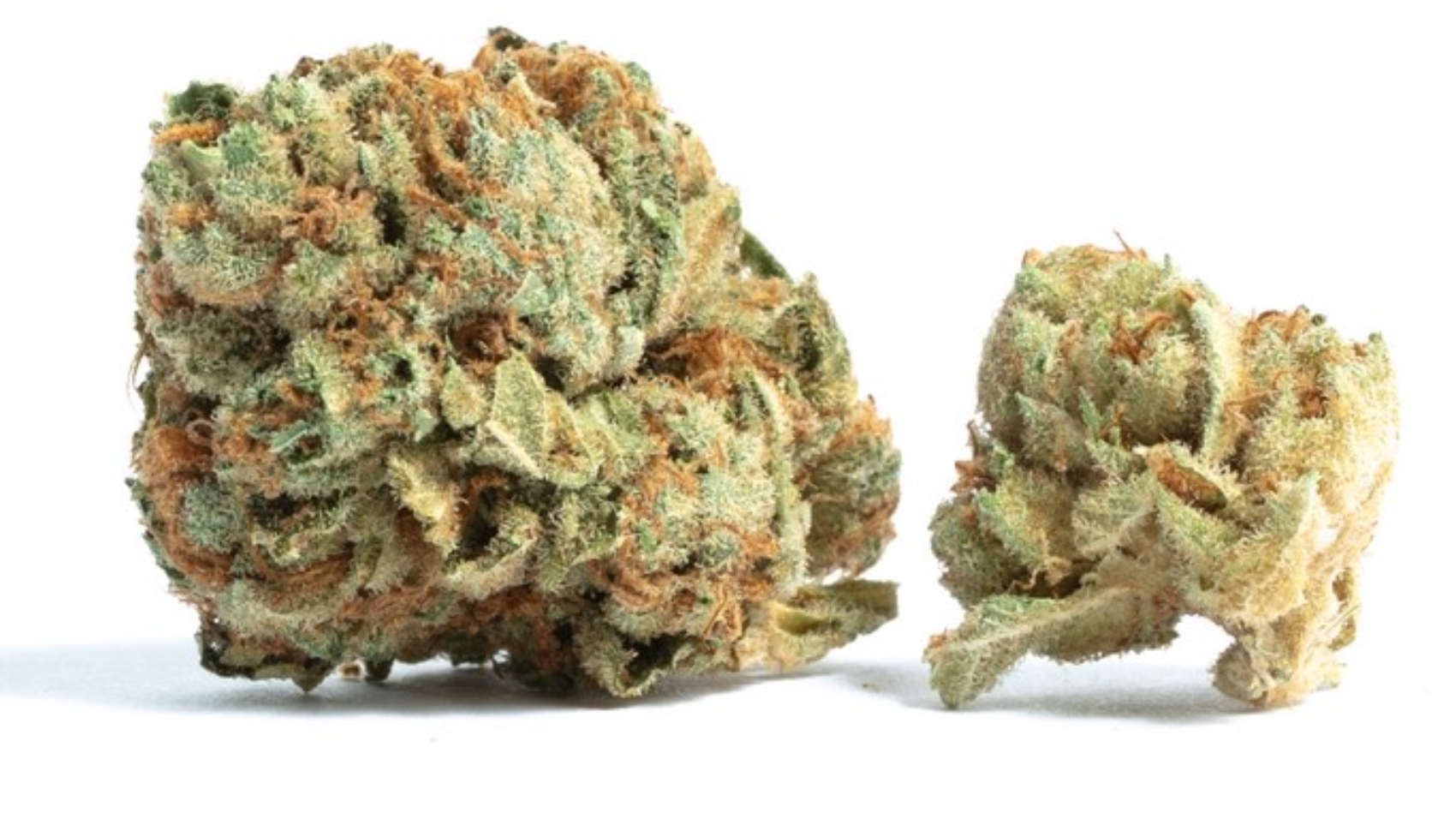 Tahoe OG, aka Tahoe OG Kush, was created in the Lake Tahoe/Mammoth region by California breeder Ganja Guru, who crossed OG Kush phenotypes to achieve one of the most potent phenos possible.

It’s not so often that we get to share with you a bud that boasts some next-level medicinal benefits, while also offering an incredible flavor profile all in one breath. Today we are doing just that as we give you the skinny on one of the best classic OG strains on the market, Tahoe OG!

A hybrid bud that boasts a delicious flavor and a killer high, Tahoe OG is the California born flower that had maintained its high-profile status ever since the late 80’s when it first emerged. If you are on the hunt for a new bud to try, Tahoe OG will surely not disappoint. Let’s dive in deep to see al that this famous bud has to offer.

The Tahoe strain contains all the excellence of its Kush heritage and its origin has been a source of confusion among breeders.

Several online sources report Tahoe was developed in the 1980s, but that timeframe is inconsistent with the 1992 emergence of OG Kush — of which Tahoe OG is a phenotype. In fact, recent genetic testing confirmed certain Tahoe cuts are related to OG Kush.

OG Kush appeared when breeder Matt “Bubba” Burger brought his Florida-grown strain to new, indoor settings engineered by California’s JoshD of JoshD Farms. The OG stood for “original,” and indicated the strain was part of the ’92 cut grown by Burger and his team.

From there, Ganja Guru moved a step further with Tahoe OG, selecting phenotypes based on THC levels and trichome density.

Its desirability earned the cultivar 3rd place for Best Indica at the 2011 Cannabis Cup.

What Is Tahoe OG?

Created by Ganja Guru over in California, and not to be confused with Tahoe OG Kush, Tahoe OG is a phenotype of the original OG strain, and it boasts an array of the typical OG traits that have made this bud so famous and well loved. Although it is typically a 50/50 hybrid, some versions of this bud can lean more towards an indica or sativa background, so this is something to bear in mind when you’re on the hunt.

Tahoe OG has made a real success of itself over the years, having come third place in the 2011 High Times Cannabis Cup, and being accredited time and time again for its potent medicinal properties that have seen it become a patient favorite the world over.

One thing we must get out the way at the beginning here is that Tahoe OG is one potent flower, and for those who are new to the cannabis scene, it may well prove too much. Boasting a high THC level at around 22%, this bud has got a reputation for its fast-acting and pretty pungent effects, so you’ve been warned!

When it comes to the high of Tahoe OG, fans of the original OG stone will know exactly what to expect here and will be able to benefit from that familiar uplifting yet sedative buzz they’ve come to know and love. For those who are about to try Tahoe OG for the first time, we recommend a very small amount; it is all you will need, trust us!

Tahoe OG may not be the easiest strain to find, but it is well worth the effort for its potent and relaxing effects that will see you ease off into a dreamy sleep with minimal effort.

Classic OG lovers will have a lot to look forward to when it comes to the flavor and aroma of Tahoe OG. There are a lot of similarities when it comes to those citrus and piney scents that will provide a warming and comforting feel for any seasoned user.

Boasting a pretty tall and lanky structure, Tahoe OG offers some uniquely bulky calyxes, which are easy to spot thanks to their neon green hue and a generous coating of trichomes. We love the look of this plant, and anyone growing this for themselves will adore the dense buds that are above average in size and give off a deliciously pungent aroma.

Amongst the slender leaves and frosty trichomes, there should be a sprinkling of burnt orange pistils that bring a pop of color to this otherwise pretty plain bud. However, what it lacks in color it more than makes up for in flavor and aroma, which takes on a complex range of fresh citrus notes combined with earth and spice.

On first inspection, users have appreciated the lemony aroma that has a subtle note of pine underneath and an almost fuel-like scent, however, once the buds are broken up there is a sudden hint of spice that makes for a wonderful combination. Upon first inhaling the flavors match the scent, offering a citrus taste with earthy notes, however on exhaling you should be left with an aftertaste that resembles chemical and petrol, so it is undoubtedly a taste sensation for users who prefer to stray away from super sweet buds.

Although this is a hybrid bud, there does seem to be a somewhat overwhelming indica vibe to the high, and this certainly lends itself to an evening or night bud. For those on the hunt for the perfect sleep strain, Tahoe OG could be the ideal contender as it offers peaceful physical relaxation and a feeling of mental clarity that goes far in banishing stress and worries.

Patients suffering from headaches, migraines and chronic pain have used Tahoe OG for its full body numbing high that can banish pain in minutes and leave you feeling super lazy and chilled. Be aware that you do only need a tiny amount to benefit from the positive effects, a little too much could see the couch-lock setting in!

Many users have credited Tahoe OG for providing a much-needed boost of motivation and creativity when taken in small amounts, and so it can be a great way to help you clear the mental cobwebs and tackle that to do list as long as it isn’t too physical!

For those struggling with appetite loss or insomnia, Tahoe OG will sort you right out as it has been known to make hunger pangs kick-in within minutes, and as the high can last up to three hours, we would suggest stocking the cupboards in advance!

If we had to summarize Tahoe OG effects, we would say this is a pretty potent bud, so much so that an average amount can you see you with a permanent goofy grin and an inability to get up off the sofa! If you are on the hunt for a bud that will eradicate pain and relieve worries, and even induce a little creativity and a fit of giggles, this is indeed one to try!

Tahoe OG Kush is an Indica-dominant strain that comes on quick. Hailing from Lake Tahoe, California, this strain is a cross between two OG Kush cuts: the classic OG Kush and San Fernando Valley OG Kush. The result is a highly sedative and potent hybrid. Expect THC levels to hover between 20 and 22%. Both your mind and body will feel more than a little numb after a taste of this strain.

You’ll have an hour or so of euphoria before you notice your eyelids beginning to close. Some users report some wisps of creative inspiration before the drowsiness kicks in.

Much-enjoyed by all the Kush lovers out there, Tahoe OG Kush has widely been toted the strongest of all its cousins. This strain carries with it the classic OG high that marks its parentage, mixed with the medicinal effects that it was specifically engineered for.

Tahoe OG Kush is the ultimate relaxant, and will make you feel like you are wrapped in a big giant marshmallow blanket. This Kush is great at making you feel all warm and fuzzy and soothing you into becoming sleepy and ready for a comfortable night in.

This strain is great at inducing all the happy chemicals too. It is both euphoric and uplifting and a powerful mood-elevator. Another effect of Tahoe OG Kush is that it can induce the munchies, making you feel hungry and insatiable, and ready for snacks.. Lots of snacks.

Perhaps the most significant side effect of Tahoe OG is the couch-lock, which can be pretty tricky to avoid due to the pungent nature of this flower. Users who are after a long evening in on the sofa may not mind this, but for those looking for the more stimulating benefits of the bud will want to ensure they only have a minimal amount.

Some users report slight dizziness, usually attributed to taking too much of the bud, while more report dry eyes and mouth, which is very common with most buds.

In general, though, Tahoe OG doesn’t appear to have any detrimental side effects, and we haven’t seen any reports on it causing paranoia, making it a great choice for those suffering from anxiety.

As an inbred descendant of the OG Kush strain, Tahoe OG Kush retains many of that strains signature flavors and aromas. Marijuana enthusiasts will note the lemon and earthy flavors, along with pungent skunky smells. That skunk does not make for a harsh smoke, however, as this has a smooth, thick inhale that, paired with its sedative effects, make this pleasant nighttime strain.

Seeds of this strain produce incredibly dense nugs with compact leaf structures. Intensely green with visible trichomes, they aren’t the biggest nugs around, but hardly the smallest either.

The strain reeks long before cutting, with alpha-Pinene and humulene contributing to its signature Kush aroma.

Tahoe OG Kush is a Hybrid marijuana strain. A descendant of OG Kush, this strain will leave you feeling relaxed, happy, euphoric and even a little sleepy. Expect classic Kush flavors and some pretty high levels of THC, around 20%.