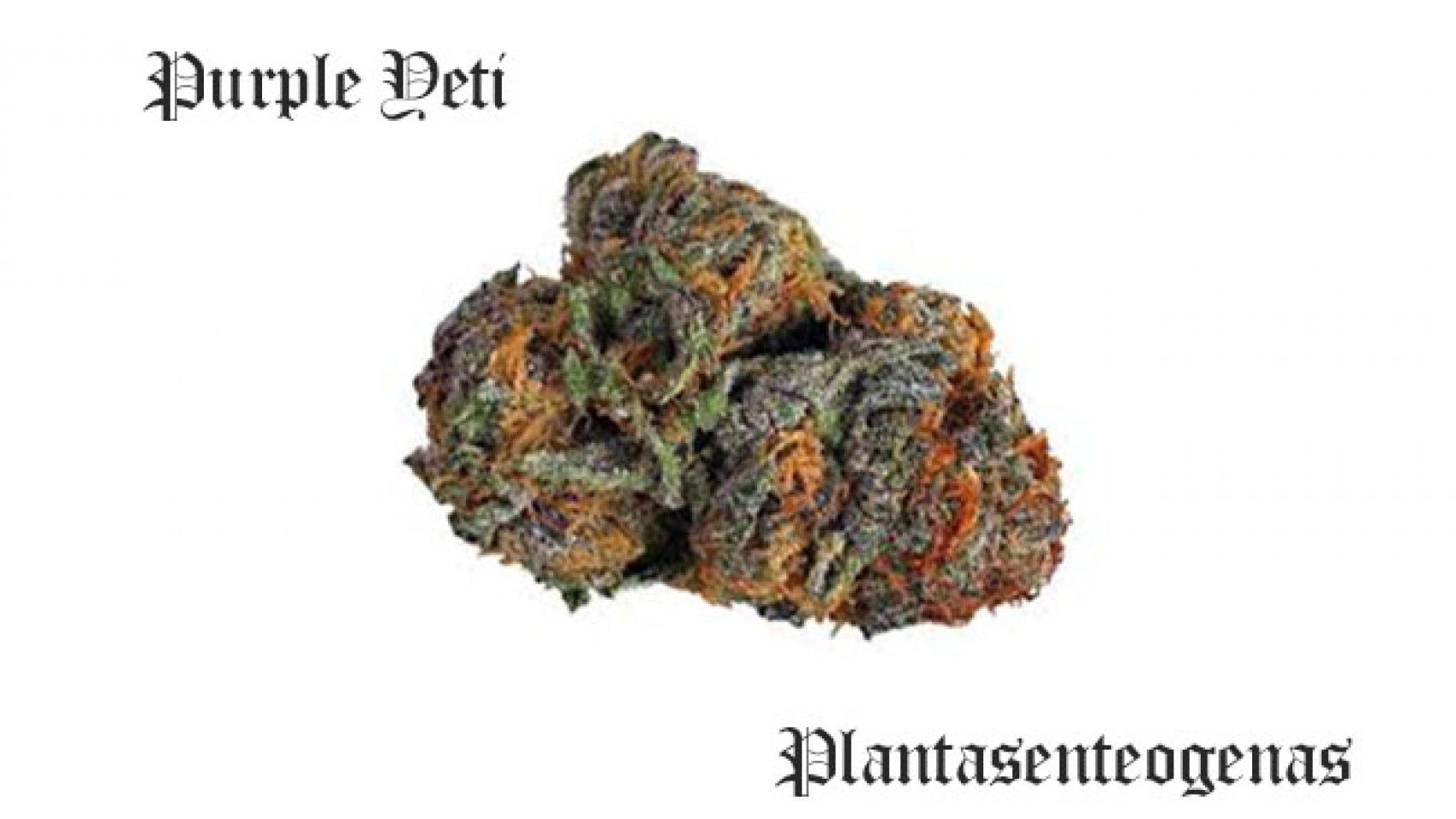 Originally known as the Headband BX, Yeti OG is a highly sought after strain that has become a bucket list item for many a weed connoisseur. As elusive as its namesake, this indica-dominant bud was created by NorCal Collective (Loompa Farms) for the purpose of bringing together high THC content and high CBD content without leaving the user completely knocked out.

This heavy hitter boasts high THC levels of around 20% on average, but what makes this a go-getter strain like none other is that it pairs that with a CBD content of 3% and above. This makes for an ultra relaxing experience with a moderately heady high to accompany that. Nugs give off a super appealing grassy aroma that is overshadowed only by its super creamy flavors. These soft notes make it a very easy smoke and therefore very easy to love. The orange hairs and thick coating of glittering trichomes compliment the rich green coloring.

The high from Yeti OG is one of a kind and is said to be for experienced users only. Found mostly in Northern California, but gaining popularity outside of the state, this bud has a unique beginning, wrapping a pressure around the crown of your head (hence its former name, Headband) that lasts for quite some time and gives you the feeling that maybe you didn’t smoke enough. Don’t trust your gut on this one – it’s a slow onset but it will kick in eventually. Once that pressure settles you’ll start to feel a punch of euphoria and arousal without increasing your heart rate or giving you racing thoughts. Because of the indica effects, the body high is deep and steadfast. It will leave you with a happy, but weighted feeling.

Medicinal users love this strain for its sedative properties, making it ideal for staving off chronic pain and headaches and giving users the breath of fresh air that they crave. For the treatment of insomnia, try this bud an hour before bed. For mood disorders such as depression and stress, try this in a slightly lower dose. Novice users beware, as this strain is recommended for intermediate to advanced smokers due to its tendency to get away from you. Although the effects aren’t as intense as the name might suggest, they are on the stronger side.

If you’ve ever wanted to try growing your own bud, but don’t know where to start, you may want to look into Yeti OG as a starter. Depending on who you ask, this is mostly an easy grow, though some say intermediates have a better yield. Yeti OG is an indoor/outdoor strain that does well in mild to warm climates. The indoor flowering time is 8 to 9 weeks or you can expect an early October harvest outdoors.

Yeti OG is a super easy smoke that will have you feeling good and definitely reaching for more. The creamy flavors and smooth effects make this one a must try if you are in the area of its homeland. If you want to try a newly dubbed connoisseur strain before it becomes a rarity and retreats back into the Northern California forest, give this one a go.

Yeti OG (aka Headband BX) is a mostly indica variety from Loompa Farms and can be cultivated indoors (where the plants will need a flowering time of ±60 days) and outdoors. Loompa Farms’ Yeti OG is a THC dominant variety and is/was never available as feminized seeds.

The parentage of this exceptional breed started off with the well known Loompa Headband aka Underdawg to those familiar with the Loompa Farms Underdawg in California Dispensaries. She was originally crossed with a climatized breed that had been worked in the Northern California mountains. The Original breeding goals were to maintain as many of its OG characteristics while providing a plant that can realistically be grown in a more northern environment and finish on time before the rains and freezes come. This breed has been worked for 6 generations and is now ready to be released to true connoisseurs worldwide. She will display all her OG type characteristics, in smell and taste and high, with the addition of stronger growth characteristics and vigor. With an added benefit of having yield increases in certain phenos. This line has not been IBL’d and that is deliberate. Variation has been maintained while weeding out the less desirable phenos. The largest area you will see variation, is in the yield and flower formation. We leave it to the connoisseur to pick and choose his/her favorite plants.

Outdoors: OG behaves differently inside vs outside. OG typically outside grows into short squat bushes with many tops, and indoors behaves more sativa in her growth structure with stretching. Expect the Yeti to behave more sativa like outdoors, growing tall with long and large colas packed with resin and finishing around the middle of October generally speaking. One very nice surprise you will find is that she has excellent mold and pest resistance outdoors, and will likely be the last plants in your garden to show mold. This is critical for outdoor growers. She will behave like this even through autumn rains. These plants will grows as large as you allow them if your root zone is big enough. A lot depends on your style and technique for outdoor cultivation. Like most plants yields are all dependent on root zone area and sun exposure. But given enough sunlight and big enough root zone it is not unusual to see multi lb. plants. We here at the farms have witnessed 5-10 lb plants given proper conditions. It should go without saying, do not expect these yields in 50 or 100 gallon pots. Even these pot sizes will see multi LB plants given enough direct sunlight. Be prepared to have very tall ladders and strong support systems if your growing to maximize yield.

The Yeti OG cannabis strain is classified as an indica-dominant hybrid. It has roots that trace back to Loompa Farms in the Humboldt County region of Northern California. While originally called Headband BX, it was later changed to Yeti OG because of its towering height, much like the mythological creature itself.

The Yeti OG strain was made by crossing OG Kush with Sour Diesel. Yeti OG THC levels average at 20% and its CBD levels are higher than average, resting at 3%.

The buds of Yeti OG have long wavy leaves that are beige, caramel, and army green in color. This is in large part due to its amber coat of trichomes. Small clusters of fuzzy orange pistils can be seen scattered throughout its buds.

Don’t be tricked by Yeti OG. A full ten minutes after smoking or vaping it, reviewers expressed how its effects were hardly noticeable. Five minutes deeper, a new world of ecstatic bliss opened up. Thoughts and ideas flowed freely. A sense of peace and complete relaxation of the muscles was then noted by users. Chronic pain and inflammation seemed to dissipate for them. This left a lighter and free feeling in both the mind and body.