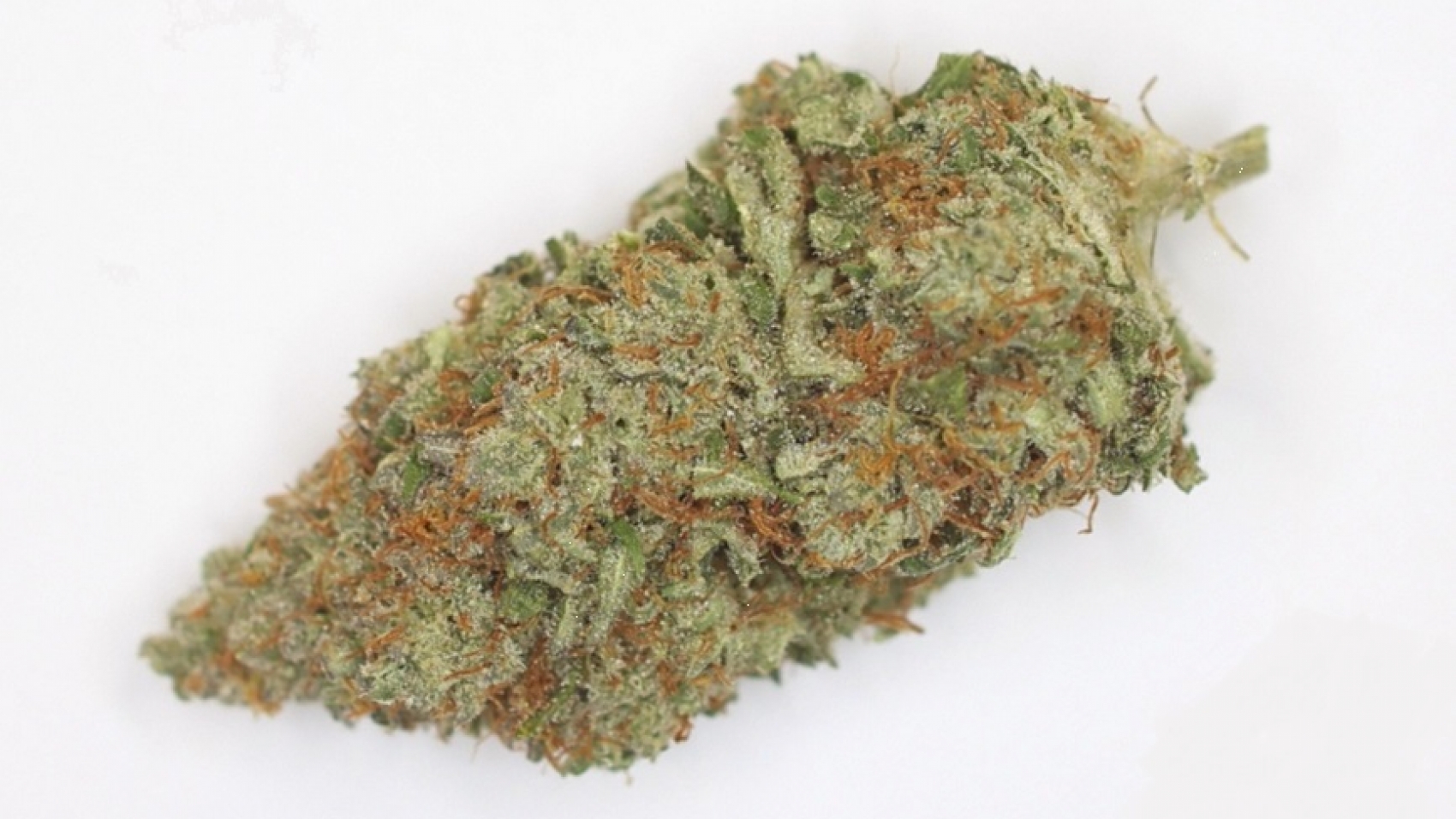 Pitbull was bred in the early 2000s by U.S. seed company Stoney Girl Gardens as a cross between P-91 and their own award-winning Sugar Plum. This mostly indica strain has an extremely quick flowering time at 6-7 weeks. Just like the dog breed it’s named after, this plant is tenacious, making it a versatile grower indoors or out that produces high yields. Buds will be light green and fragrant, smelling of tropical fruit with earthy, skunky notes. Pitbull’s taste is also fruity and its indica buzz hits fast and hard.

The pitbull dog breed has gained an unfair reputations for being dangerous and overly aggressive. The strain of the same name, while very potent, is anything but vicious. It was developed by Stoney Girl Gardens, a group of Portland-based breeders who have created flavorful and locally-themed strains like Marionberry. Pitbull is a cross between P-91 and Stoney Girl’s own sativa Sugar Plum. Though the breeder claims THC levels as high as 36%, independent cannabis testing lab Analytical 360 has found the bud to have between 10% and 21% THC.

Pitbull impresses with medium to large-sized nuggets that adhere in a surprisingly loose and fluffy bud structure. The flowers are roughly spade-shaped. Olive green leaves are twisted through with vibrant orange pistils. Occasionally, phenotypes of this strain will show off streaks of purple in their leaves; these hues come about when pigments called anthocyanins in the plant’s genetics are agitated by colder than average weather during the growing process. Finally, translucent white trichomes cover these buds, giving them a slightly dewy sheen.

When properly cured, Pitbull gives off a pleasantly fruity, tropical odor with distinct lemon-lime notes. On closer inspection, there’s also an underlying funk, likely passed on from pungent grandparent strain Northern Lights. Breaking open or grinding the buds yields a floral aroma with some spicy accents. When combusted, this strain burns with a harsh and acrid smoke that may trigger coughing for some. Refreshment returns on the exhale, though, with an herbal-tasting smoke, reminiscent of sage.

Pitbull’s high comes on quickly for an indica. Initial effects manifest as a tingle around the face, particularly the eyes and temples. A heavy, full-body stone arrives soon after, rendering any anxiety or discomfort null. This indica is unique in that its couchlock takes hold relatively early, pinning smokers passively in place. Users may experience weird sensory effects, including distorted depth perception and slight auditory hallucinations. Any other mental side effects have a cloudy, dopey character; this is not a strain for intense cerebral activity or problem-solving. Instead, savor this sleepy strain as you lounge around at home, zoning out to some atmospheric music or trippy movies. Alternatively, use Pitbull to enhance your appreciation of the great outdoors on a camping trip or around a fire pit. This bud’s easygoing vibes are as enjoyable solo as they are with a group of close, like-minded friends. In high enough doses, beware that this strain can lull you into a deep and restful sleep. Pitbull is best enjoyed at nighttime — or at least during a lazy, unproductive day.

Many medical cannabis patients may also find value in Pitbull’s strong, almost narcotic levels of sedation. It can be a great way to soothe pain, whether temporary as due to injury, or chronic and nerve-related as due to conditions like lupus or arthritis. The strain may also relieve more minor irritations like headaches and nausea. As noted, Pitbull can also work against insomnia, granting much-needed rest for the sleep-deprived. Psychologically speaking, this strain’s ability to elevate mood can be a good temporary antidote to mild to moderate stress, depression, and anxiety. Because it is unlikely to bring about intense, paranoid patterns of thinking, this bud is recommended for those who are prone to panic or who have a low tolerance for THC.

Stoney Girl Gardens only sells seeds of Pitbull through licensed brick-and-mortar retailers and has not made them available for sale online. As such, prospective growers must obtain clippings from mature, healthy plants of the strain in order to grow genetically identical “clones.” Fortunately, Pitbull is a hardy grow, resistant to mold, mites, and other adverse conditions, making it a great option for newcomers to cultivation. Plants grow short and bushy with strong lateral branching and are easily accommodated indoors. Those looking to bring out the flowers’ full purple potential should briefly expose their crops to nighttime temperatures between 10 and 15 degrees below average. Pitbull flowers within a brief 6 to 7 weeks when grown indoors.

A great choice for a slow and mellow evening, Pitbull should have a home in any indica lover’s stash box. Although mostly popular in the Pacific Northwest, there’s not much stopping this bud from enjoying international fame like its alternative namesake, Mr. Worldwide.

THC levels are relatively high in this indica-dominant hybrid, 25% in some tests, meaning a rapid body high that can be deeply relaxing. CBD content, on the other hand, is very low, much less than 1%. Pitbull has a sativa/indica ratio of 20:80, so there isn’t much in the way of cerebral effect or energy kick. But the physical high is enjoyable and calming, with a tingly sensation and a mood boost. This strain can be used to alleviate anxiety, depression, mood swings, migraines and other headaches, GI distress, nausea, chronic pain, and insomnia, making it an unusually effective choice for medical use. Negative effects may include dry mouth and red eyes, while dizziness and paranoia are possible but less likely. Pitbull is a cross of P-91, a sativa-dominant hybrid out of California, and Sugar Plum, an award-winning U.S. strain. Pitbull smells like lemons and flowers, while it tastes of lavender and lemons. The buds have a light green appearance. This strain can be found on the legal markets in the Pacific Northwest and in Arizona. Elsewhere it’s not as common.