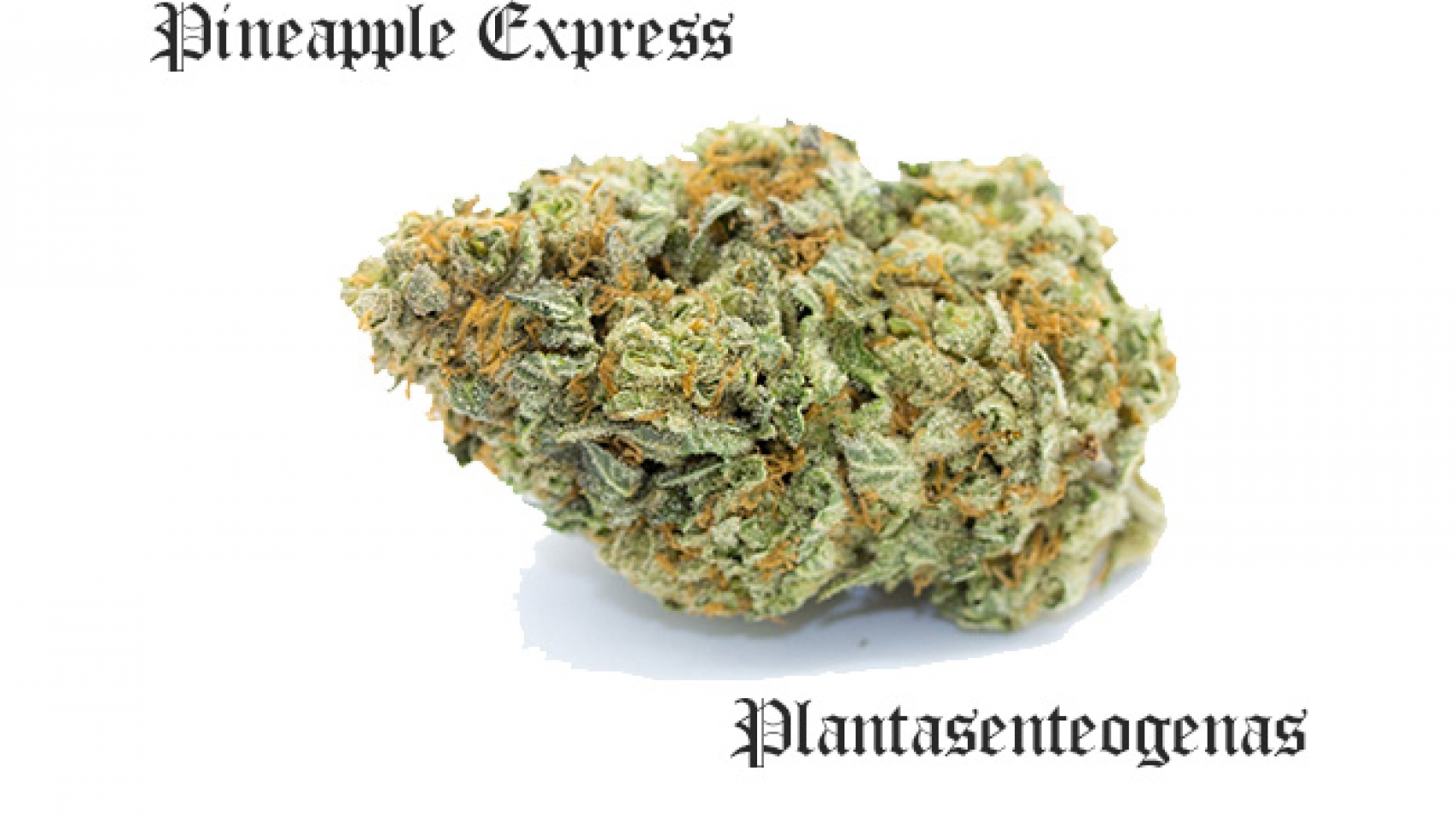 In 2008, the Pineapple Express depicted by the James Franco and Seth Rogan film was an ultrapotent super bud. The real life version? A great strain, but not nearly as intense. Pineapple Express is an upbeat flower with a smooth, tropical taste. A charming cerebral high coupled with an easy bodily relaxation and scrumptious aroma make this strain one of the most popular hybrids around.

The Pineapple Express strain of the film may have been a couch-locking super bud, but the strain in real life is a different beast. The high tends to begin in the head, with a happy kick and a positive sense of well-being. Though sativa-dominant, the strain strikes a balance between body and mind.

Pineapple Express is an exceptional recreational strain. This bud certainly provides a strong experience. However, it’s playful nature and upbeat attitude make it excellent for social gatherings and plenty of long, playful conversation. Plus, this strain’s delightful, fruity scent is always a delight at a party or any other festivity.

After a few puffs, you may find yourself floating off into a dreamy, but pleasant headspace. The plant’s focused characteristics make it a great choice for daytime activities. Everything you do will be touched by a sort of relaxed, blissful, happy marijuana glow. Artists and creative types may enjoy the thought-provoking qualities of this strain. Many users report creative inspiration after a few puffs.

Pineapple Express is a hybrid cannabis strain that tastes tropical, with a pineapple appeal and undertones of spices and cedar. When harvest ready, this strain produces dense light green buds with slight purple hues.

Its THC content usually averages between 12-17% and doesn’t get much higher than this. Despite its acclaimed psychedelic stardom from the stoner movie “Pineapple Express,” its high is actually on the milder side. However, consumers enjoy its softer cerebral effects that increase creativity, can break through writer’s block, and increase social inventiveness while also inducing a light body buzz the relieves mild aches. Focus and awareness are often heightened. This is a lovely strain for consumers that are entering the cannabis scene.

The most notable ill side-effect is dry mouth, with some claiming it also creates dry eyes. While more unlikely than not, some have reported slight bouts of paranoia and dizziness that occurs when consumed improperly.

Flowering time for Pineapple Express is between 7-8 weeks and is most potent when “supercropped” (bush style growing: using lights of 600+ watts and topping the plant).

Many consumers report that it also provides a smooth and gentle bodily relaxation, easing signs of physical stress. Those that are a little more canna-savvy may be able to wake n’ bake with this bud, but be prepared for some drowsiness later on down the road.

Like many high-THC strains, this one can stimulate appetite. Grab some friends and a bowl of snacks before breaking into this flavorful herb.

What effects does Pineapple Express have?

Users enjoy Pineapple Express for its softer cerebral effects that increase creativity, can break through writer’s block, and increase social inventiveness while also inducing a light body buzz that relieves mild aches. Focus and awareness are often heightened. The most notable ill side-effect is dry mouth, with some claiming it also creates dry eyes. While more unlikely than not, some have reported slight bouts of paranoia and dizziness that occurs when consumed improperly.

Pineapple Express is a cross between Trainwreck and a Hawaiian landrace strain. Trainwreck is a powerful hybrid known for its happy high and soaring THC levels.

Hawaiian strains are thought to be mostly sativa and provide a spirited clear-headed elevation. Sativa-dominant, Pineapple Express provides a happy and euphoric high overall, along with a mellow increase in energy.

Like Trainwreck, Pineapple Express can be quite potent. The THC levels in this bud often reach over 20 percent, making it appropriate for those with some cannabis experience.

Growers can expect a moderate yield a fairly speedy flowering time from this bud. Most harvest between 53 and 62 days. This strain’s buds are both tightly coiled bundles leaves that stretch out in the typical Sativa shape. Plants that have been exposed to cold weather will show flashes of red amongst the deep green leaves, always a pleasing extra for marijuana enthusiasts. Orange, sometimes almost red pistils and a nice layer of resin top off these nugs, which can be tough to break up without a grinder.

While Pineapple Express does make for a delightful experience, the aroma of this bud is the most likely to impress. A strong, floral fragrance tantalizes the nose. As the name might suggest, it offers a strong tropical feel. Notes of pineapple, wood, and a slight sharpness make up the aromatic base of this flower.

PE is known for being a fruity variety to be sure, but whether or not it smells like actual pineapples is a matter of debate. Though reports online of a pineapple scent and flavor are out there, there’s something to be said for the “placebo effect” of strain names, and it’s likely most of these plants don’t actually smell like pineapples. The version that floats around Colorado is a softly sweet variety with a fruity-floral tang.

How to spot it

While your local drug dealer is probably still passing off whatever smells sweet as “Pineapple Express” to prey upon gullible newbies, there’s a definable variety of cannabis by this name going around dispensaries. It doesn’t smell like pineapples to our nose, and is relatively unremarkable overall, looking different depending upon who grows it and which seed it came from. Again, it’s tough to pin down this variety because of the lore surrounding it and the tendency for people to rename strains to meet customer demand.

The clone that’s passed around as Pineapple Express first appeared in California medical dispensaries, but has since spread to the rest of the world. We would assume it was California-bred, but the mysterious nature of this strain makes it hard to pin down. The seed company game is notoriously full of liars, so we hesitate to say any of them had anything to do with this variety.

Uncertain. A seed company called G13 Labs claims to have invented the strain, and at one point claimed it was a cross between Trainwreck and Maui Wowie, but now has it listed as Big Bud x Skunk (which makes absolutely no sense). We think it’s more likely that someone renamed a fruity strain following the release of the popular stoner comedy of the same name to ride the movie’s hype train. All signs point to a Cinderella 99 hybrid, a legendary plant known for having a complex rotten pineapple phenotype and a soaring sativa effect, possibly crossed with Trainwreck. Basically, we can’t say for sure what the hell this thing is, and seemingly neither can anyone else.