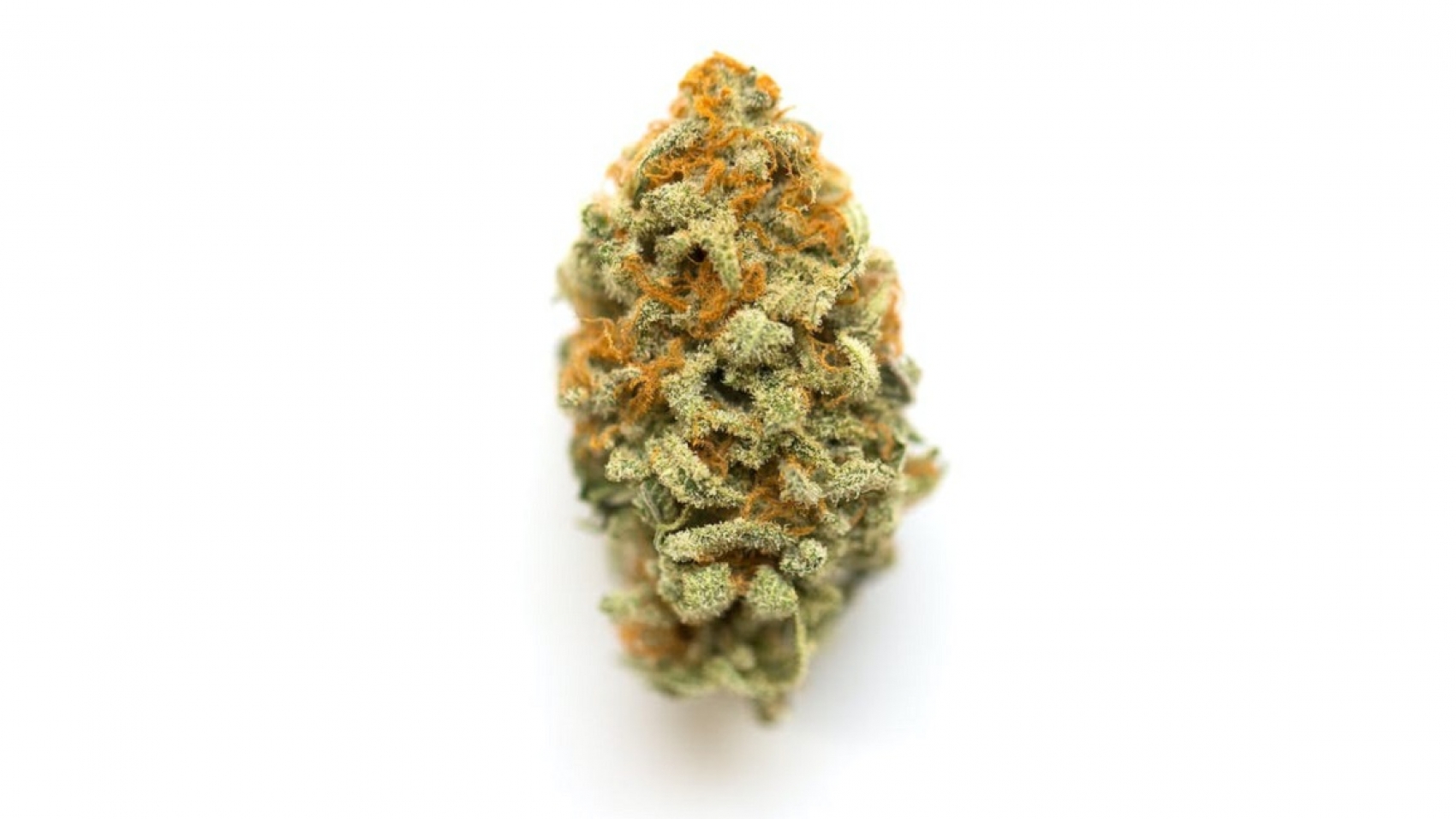 Orange Crush is a hybrid marijuana strain made by crossing California Orange and Blueberry. This strain produces powerful cerebral effects that are uplifting. Orange Crush offers a super sweet and tangy flavor profile. Growers say this strain has a flowering time of 7-9 weeks.

Orange Crush is known for its dank earthy scent and citrus flavor. This Sativa-dominant strain that was devised by the minds at BC Growers Association produces a powerfully soaring cerebral high that wraps the mind in a blanket of euphoria. For experienced users, the effects are generally described as positive, uplifting energy that spurs creativity.

The orange-like taste of this strain’s smoke may also, unfortunately, bring about cotton mouth and dry eyes for most novice users. Some who use this strain may also feel light-headed and report feeling “the spins” – an unwanted effect that leaves the user feeling as if the room is spinning. The usual feeling of paranoia that exists with many Sativa strains may also occur when using higher doses.

Though some find the strain makes them feel more anxious, many more instead find relief from chronic stress, anxiety and nervousness typically brought on by depression-related disorders or PTSD. Orange Crush’s ability to increase the production of dopamine, the chemical that causes one to feel happy, is used to help fight off the effects of chronic depression.

The strain is also used to quite literally take people’s minds off of their chronic pain. Those who suffer from nausea and migraines also choose this to help manage their level of discomfort.

Orange Crush is a descendent of the legendary “Californian Orange” and “Blueberry.” This strain has the ability to thrive under low light (but not lower than 25 to 30 watts). Coupling that with the fact that this strain grows quite easily makes it a good choice for new growers on a tight budget and time schedule. Orange crush rarely breaks 140 centimeters and completes its flowering time in around 55 days.

Orange Crush cannabis strain is a cross between California Orange and Blueberry.

Known for its citrus aroma, Orange Crush is a popular sativa-dominant hybrid that delivers moderate cerebral effects (80:20 sativa/indica ratio). THC levels top out at about 22%, so it isn’t the most potent medical strain. But the euphoric effects are pleasant, with increased energy and creativity. CBD levels are very low, about 0.05%, so this strain isn’t ideal for patients whose disorders respond to that substance. Orange Crush is the offspring of California Orange, and Blueberry, an indica. The head high is upbeat and happy, perfect for a gloomy day. It can be used to treat depression, anxiety, pain, and migraines. Dry mouth is the most common side effect, followed by dry eyes and dizziness. Paranoia and anxiety are also possible but rare. Like other Orange varieties, Orange Crush has a strong citrus aroma and flavor, with distinct notes of sweet oranges. The appearance is also reminiscent of oranges, with vibrant gold flecks amid the bright green bud. This strain is most popular on the West Coast, in Colorado, and in Arizona, but isn’t hard to find in most other places.

What is the Orange Crush Cannabis Strain?

Orange Crush was initially bred by the BC Growers Association, a crossbreed between California Orange and Blueberry. Its parentage will immediately demonstrate its intended flavor profile; by crossing two prominent fruit-based strains, it is clear that this was an attempt to make an even more intricately flavored fruit strain, or perhaps just to try and get the flavor of citrus in the frigid north of Canada.

However, it isn’t just the blending of fruit flavors that make this strain so enjoyable; it is its potent effects.

Orange Crush is a hybrid strain with prominent sativa leanings, which is somewhat surprising considering the indica leanings of its ancestors. The effects of Orange Crush are most frequently described as cerebral and intense.

As with most great strains, you can expect the first feeling you will experience to be one of intense happiness and energy. This energy starts at your toes, working its way up and invigorating every single part of your body on the way up.

Once it starts to hit your brain, expect to feel like a blanket of intense, calming happiness wash over you. The high can best be described as falling into a comfortable bed of warmth and pleasant feelings. There is also going to be an intense sensation of the munchies that will kick in about halfway through.

This isn’t to say that it causes tiredness or couch lock, however; remember that Orange Crush only has about 20% indica in its genetics, so you won’t feel any kind of overpowering desire to sit down.

Instead, the relaxation caused by this strain is tempered by a precise, focused energy that leaves you feeling motivated enough to do anything.

This motivated energy is primarily creative, rather than driven, so it is most likely best enjoyed when you have nothing that you need to get done; instead, take it to spur you on when completing exciting creative projects, or just to generally enjoy yourself.

This kind of driven, yet aimless energy is quite difficult to come by these days, as most strains are either pushing you towards specific tasks or just pure physical energy, so the kind of non-specific energy gifted to you by Orange Crush deserves to be cherished.

The lower quantity of THC, combined with its gradual, yet persistent high makes this strain perfect for pursuing creative projects that don’t require any kind of extraordinary effort. If you want to express yourself musically, this would be perfect.

It isn’t just the effects, of course; many people keep an eye out for Orange Crush so as to be able to enjoy its uniquely delicious flavors.

With a name like Orange Crush, you might expect the only flavor that you can detect with your nose to be sweetness. However, Orange Crush is one of those strains with surprisingly contrasting aromas and flavors.

On first smelling this strain, you will notice a profoundly earthy, almost damp smell, not too dissimilar from the scent of a warm cave on a spring morning.

There is the smell of rich earth, as well as just generally the smell of moisture and nature. Cracking open the buds only expands on this smell – just like with tilling up soil, the earthy smell only gets more potent and noticeable once you start to break it apart.

The overwhelming smell is one of intense richness, leading you to believe that the resulting flavor is going to be filled with darker, earthier flavors.

However, this isn’t the case.

Despite its profoundly earthy and robust aroma, the flavor profile is far more faithful to its name. Orange Crush has, as might be expected, an orange flavor.

However, even the simple descriptor of ‘orange’ has many different layers to it. There is the tart sweetness of a tangerine, all the way to the almost acidic, astringent quality of pure orange peel.

The flavor of Orange Crush is much closer to the sweet flesh of a perfectly ripe Valencia orange; this means it almost tastes like orange juice. There are none of those tart, uncomfortable flavors of the white pith, nor is there any noticeable acidity. Instead, it is just the sweetness and nothing else.

Though the flavor might seem to be one note, there is a degree of intensity to it that makes it all worthwhile. What’s more is that this flavor remains consistent throughout the entire smoke, from the first toke to last exhale, making the whole experience like one big mouthful of fresh orange.

For such an orange-flavored strain, the actual bud of Orange Crush is surprisingly regular.

The bud itself is a deep mottled green, though the color palette can change depending on local growing conditions, as well as the speed with which it has been dried. If it was grown in a humid environment but dried quickly and adequately after harvest, there will be a variety of bright yellow pistils all along the surface, providing a uniquely interesting color contrast that makes the visual appearance of Orange Crush just as enjoyable as the flavor.

Despite its pretty standard green color on the bud, the leaves and general plant growth are very interestingly colored, almost tinted with purple under the right light.

Of course, the only way to actually experience this for yourself is to grow your own Orange Crush.