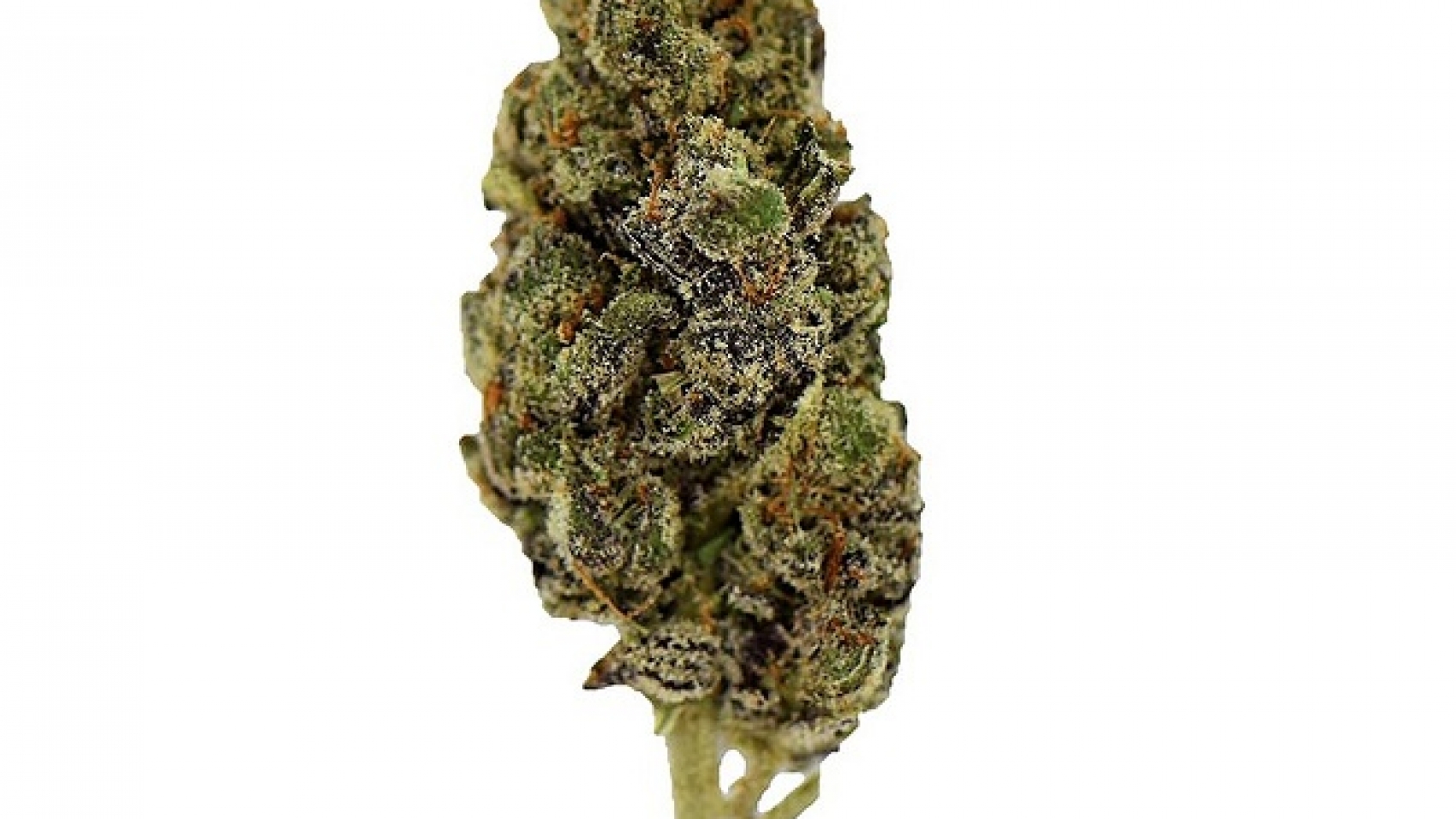 Now and Later is an evenly balanced hybrid marijuana strain variety of Zkittlez. Now and Later gets its namesake from the famous candy and is sometimes known as Now N Later. Now and Later has a sweet, full flavor profile with aromas that are surprisingly earthy and spicy. Now and Later is a creeper strain, which means the high will slowly creep up on you instead of hitting you right away. At first, this strain comes on light and slow but will eventually put you in a sedated state. Growers say this strain comes in small nugs that are round and dotted with orange hairs. Medical marijuana patients choose Now and Later for its ability to fight symptoms related to chronic pain and fatigue.

The Now & Later strain is considered a balanced 50/50 hybrid, though many users report that it takes on more indica-dominant effects. It comes from a pheno-hunted cross between Zkittles X Abula, which is a sativa-dominant hybrid by Pacific NW Roots. It gets its namesake from the classic candy of the same name and takes on a lot of similar properties. For example, the strain is a great option for any time of day. It tastes great, hits hard, and lasts long, making it possible to kick back and relax and enjoy whatever the day throws at you before sending you off into a long and peaceful rest. The one key difference is that the strain doesn’t take on tropical fruit flavors like the candy. Instead, it offers a great mix of herbal, earthy, and woody flavors and uber-high potency levels of 20-26% THC.

Growing the Now & Later strain is rated moderate to difficult since the strain itself is a bit of a bugger to track down. It was originally bred by Beyond Top Shelf by crossing Zkittlez with Abula and is ready to harvest in approximately 65 days. While it grows readily, it does require a fair amount of trimming and training before flipping into the flower cycle to ensure that it focuses more on cola production. The flowers themselves are rather dense and frosty, so great care should be taken to avoid common issues like mold or powdery mildew. Be sure to monitor your humidity levels closely during all stages of the grow cycle and avoid letting your colas sit or lean on anything other than trellis netting. Otherwise, it grows well. Seeds haven’t been released as of yet.

Now & Later plants are beautiful and bushy. They grow dense foliage ranging in shades from dark green to a deep ocean blue. Her water leaves are large and wide, growing in the standard indica-dominant style. She produces massive colas in a ton of different colors, though she tends to only throw purple hues in cooler climates. Each individual bud breaks away from the main colas in small, round pieces. Each one is dense and hard, ranging from dark olive green to purple with long, thin pistils in shades of electric orange and red. The most dazzling aspect of Now & Later’s appearance is of course her trichomes. Each of her flowers is coated in a thick layer of bright white trichomes that give the flowers some contrast and a crystalline appearance.

While the appearance of the flowers is ultimately captivating, the Now & Later strain scores high marks in all other areas, including her aroma, flavor, and effects. While growing, her aroma is very herbal and natural, including notes of pungent earth, wood, and spice. She offers a notable sour citrus fragrance that is reminiscent of tropical candies, though the lasting impression is that of natural terps. When the flowers are dried and agitated via grinding or chopping, more subtle notes make an appearance. She throws unique scents of sour watermelon and cherry candy along with a pungent herbal funk that leaves you with a mouth-watering sensation.

All of the detectable scents make their way into the flavor profile, surprisingly enough. With many new strains, the flavor is often inferior in comparison to the scent, but Now & Later doesn’t leave anyone feeling disappointed. On the inhale, the first impression of the strain is that its notably sweet and sour, though very earthy. The smoke itself is pretty thick and spicy, bringing herbal flavors and wood terps to the forefront. However, the strain mellows out a lot on the exhale, leaving you with a lasting impression of sour watermelon and cherry candies. The aftertaste is pretty rich and woody with a few of those citrus terps leftover. All in all, delicious.

As you breathe your first puff out, the effects of the Now & Later strain take hold. You’ll feel an initial uplifted sensation that helps to melt away most of the days stresses while boosting your spirits. It comes with a blissful and inspiring euphoric effect that keeps your energy levels feeling pretty nominal. Depending on the dose, this effect may take a sedative, deeply relaxing turn. Even in small doses, Now & Later promotes a very soothing and relaxing body high that leads to a sense of sedation and couch lock. The ultimate impression is that of an extremely relaxing and soothing strain that can battle physical symptoms and help you drift off to a peaceful, long-lasting sleep.

The Now & Later strain is considered pretty heavy. That coupled with its above-average levels of THC (ranging from 20-26% THC on average) make it a great choice for medical patients seeking nighttime relief. Its euphoric and uplifting effects are a great choice for managing symptoms of stress, depression, anxiety, insomnia, and letting go of the struggles of a long day, but also promote a ton of relief within the physical body. On the physical side of things, Now & Later may be able to help with ailments such as chronic pain, headaches, muscle spasms, nausea or appetite loss, and cramps.

Now N Later, also known as “Now & Later” or “Now N Laterz,” is an evenly balanced hybrid strain (50% indica/50% sativa) created through crossing the infamous Zkittlez X Abula strains. Named for the classic candy, Now N Later packs a super delicious flavor and super relaxing high that will have you kicking back before you fully pass out in no time at all. This bud packs a sweet citrusy taste with hints of rich woods upon exhale. The aroma is very similar, with hints of earthy herbs and spices that turn sour and citrusy as the nugs are broken apart and burned away. The Now N Later high isn’t quite as bright as the taste or flavor, with super heavy effects that will knock you flat out. You’ll feel a lift at the onset of the high, boosting your spirits with a euphoric overtone that doesn’t affect your energy level in the slightest. A sedative body high comes next, locking you to the couch and leaving you fully immovable for hours on end. Thanks to these heavy effects and its super high 20-26% average THC level, Now N Later is often chosen to treat conditions such as chronic pain, insomnia, appetite loss or nausea, chronic stress and muscle spasms or cramps. This bud has small rounded piecey dark olive green nugs with purple undertones, long thin orange hairs and a coating of tiny bright white crystal trichomes.

Now N Later may get its name from how hard it hits: the high hits you now and lasts until later. Or it may just be a reference to the popular candy due to the strain’s sugary sweet palette. Mouths water to get a taste of Now N Later, but those with chronic mental conditions enjoy it purely for its mind-blowing high. Beyond Top Shelf bred the strain from Abula and Zkittlez, but everyone can enjoy it now.

The strain is a balance between Indica and Sativa (50/50) and flowers in about 65 days. Now N Later is known as a bit of a temperamental strain to grow, as it requires a lot of training and trimming before the flower cycle. Left on its own, the plant neglects its colas and produces a smaller crop, so this attention is necessary.

When it does finish growing, it produces dense flowers coated in a layer of frosty trichomes. This means that mildew powder and mold can be common problems once the strain has flipped to the flower cycle, so you need to take precautions against those too. This means making sure your humidity levels are under control and keeping the colas upright in their netting, not leaning on a wall or other surface.

If you can manage it, Now N Later grows leaves that are wide and large, densely foliated, and shaded in beautiful deep greens. Underneath lies a vibrant blue in the bushy body of the plant, almost the color of the dark ocean. The colas grow huge, with round buds separated from the main plant, crystalized with a mass of trichomes.

After being invited to Now N Later’s dense, frosty appearance, you’ll be greeted by a scent of natural herbs, pungent earth and wood, and undertones of spice. Under that, a sour citrus aroma can be detected, especially if you grind your own flowers. You may detect cherry and watermelon as well – lots of candy flavors that stem from its namesake.

When smoked, these fruit and wood tones mix into a cocktail of funky herbal earth, leaving just a hint of candy when you exhale. It’s known for being delicious.