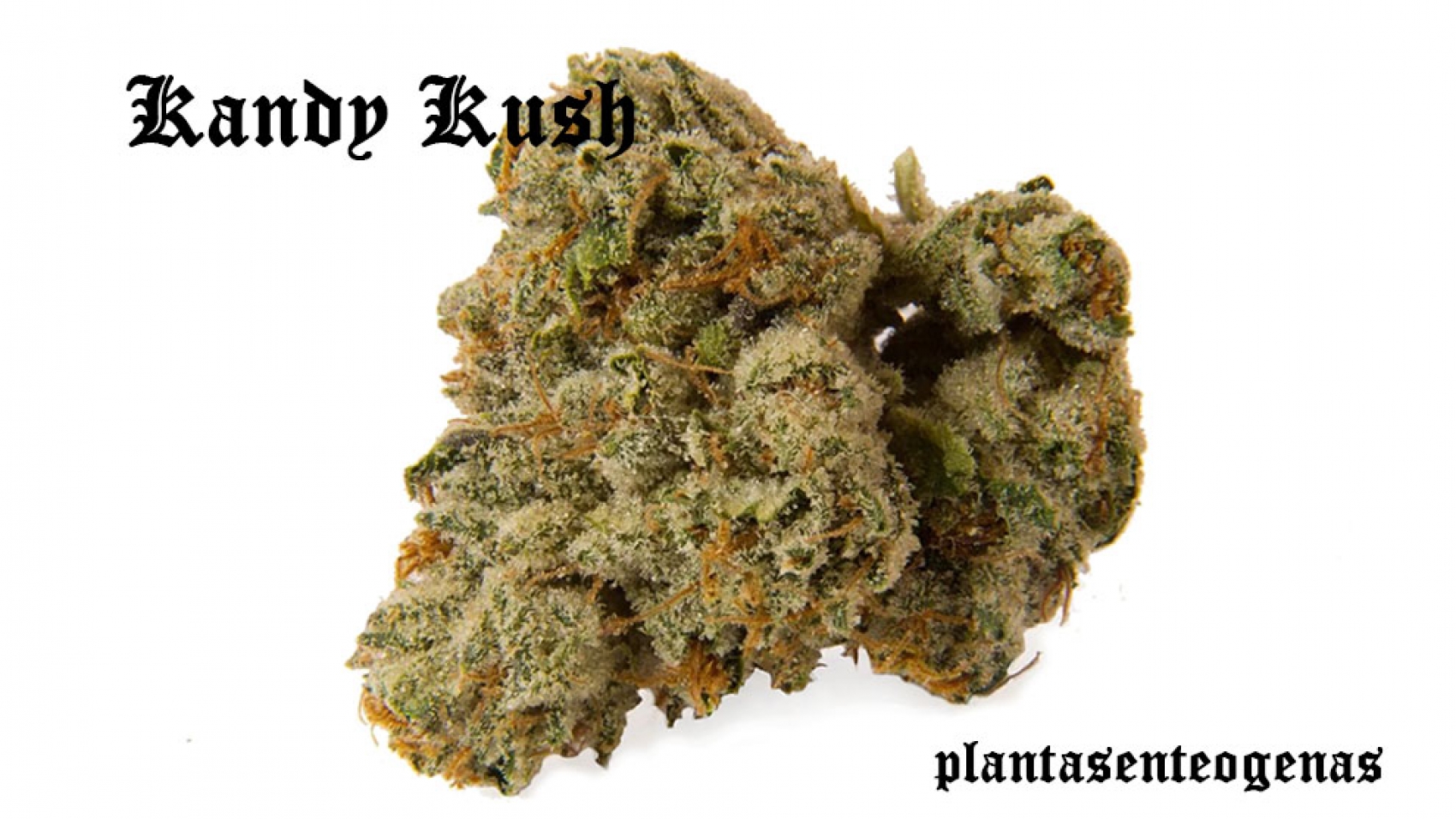 This California Classic is a sweet way to relax! A 50/50 hybrid that most often presents as Indica-dominant, its THC concentration ranges from 15% to 21%.  A version of Kandy Kush grown by Rocky Mountain Remedies, Northwestern Colorado’s first legal dispensary, won the very first Western Slope Cannabis Crown in Aspen, Colorado. Known as a potent stress-reliever and appetite-booster, Kandy Kush has become one of North America’s best-loved strains.

All About Kandy Kush Strain

Kandy Kush was originally bred by DNA Genetics and is a cross of two famous strains, OG Kush (Indica) and Trainwreck (Sativa). The version of this strain that won The Western Slope Cannabis Crown, however, was grown by Rocky Mountain Remedies, the first legal marijuana dispensary in Northwestern Colorado.

The strain’s high starts with strong cerebral effects that almost instantly lift moods by producing dopamine. This euphoria is quickly followed by a heavy, lazy body high. Kandy Kush is an ideal strain for those suffering from eating disorders and nausea because it typically stimulates appetite and gives users the ‘munchies.’

Kandy Kush is an evenly balanced hybrid strain (50% indica/50% sativa) originally produced by DNA Genetics. It was created by crossing two indica and sativa powerhouses; OG Kush and Trainwreck. According to the breeders, the aim was to combine the OG flavor with the beloved Trainwreck bud structure.

The OG Kush side of the strain brings a tasty, pronounced terpene profile along with therapeutic benefits. Meanwhile, the Trainwreck side brings lemony scents, high commercial yields, and resin production. The sweetness of the strain is courtesy of the OG Kush lineage, hence the name.

The THC levels average between 15-21%. The high is a creeper, taking several minutes for the full effects to kick in. It begins in the head as cerebral activity rises – uplifting the spirits and bringing negative thoughts to a halt. Soon after, the high moves to the body, relaxing tense muscles and leaning towards a couch-lock stone. This is why it should be used in moderation and/or at the end of the day.

For many users, the sativa effects of the Trainwreck influence in Kandy Kush can overpower the more sedative effects of the OG Kush parent. Generally, the effects are described as euphoric, uplifting, mood-enhancing, and relaxing. The sativa properties result in an initial onset of focus and increased energy levels.

Besides the generally happy mood, some users may also experience a sense of euphoria. So expect to have a blissful smile across your face – and definitely plenty of giggling. Novice users may even fall victim to Kandy Kush’s iconic effects because they are tempted to take a few more puffs just for the taste. But once the sedative-like properties hit the body, you may find yourself motionless and in a peaceful, mindless bliss.

Like the candy it’s named for, the sweet, fruity aroma of this hybrid lets you know you’re in for a treat the moment you open a jar.  Earthy with a strong lemon-Kush scent, this strain’s aroma is the prelude to the euphoric dopamine boost that characterizes a typical session.

Kandy Kush has a sweet and fruity candy-like flavor that, well, does the name well! The taste is pleasant with just the right blend of a sweet berry candy aftertaste and a subtle hint of citrus. Some even describe the flavor as having spicy, pepper-like undertones amidst the sweetness.

Vibrant oranges, greens, browns, and purples combine to give this sweet, sticky bud an appetizing rock-candy-like appearance. Its taste has been described as sweet, earthy, and pungent with an enticing lemony smell and strong

This marijuana strain can be a confusing flower. There are several different cultivars which use the moniker “Candy Kush”. A local budtender will be able to provide more information about this sweet-scented flower.

In general, this particular cannabis strain is thought to be a sleepy and relaxing hybrid with an upbeat mental kick.

A burst of cerebral sensations immediately lifts mood and sparks creativity. Later, a slow body high creeps in and takes hold for a few hours. This Indica-dominant strain is great for evening medication.

Marijuana fans can enjoy this strain in a number of different ways, including;

Kandy Kush can be grown indoors using the Screen of Green (ScrOG) method, with a flowering time between 65 and 75 days. It often produces a good size yield of approximately 140 ounces per square meter. You can also apply the low-stress training (LST) method to help improve the yields.

Due to it being relatively mold-resistant, growing Kandy Kush outdoors and in a cool climate is perfect. In outdoor conditions, it typically produces a yield of about 18 ounces per plant.

Kandy Kush has an average THC level of 18%, but it has been found to reach as high as 21% in some phenotypes.

This well-balanced Hybrid can be the strain many medical marijuana patients are looking for to offer them some relief from a range of symptoms.

Also, Kandy Kush is looked at by some users as the king of stress relievers. Although the THC content isn’t remarkably high when compared to some other strains, the calming effects make it a go-to choice for those battling anxiety and daily stress-related problems.

The strain also has pain-relieving properties, which makes it a great option for those suffering from chronic pain – whether it’s due to injury or internal ailments that cause discomfort. Kandy Kush can even be helpful in alleviating more “normal” discomfort, like period pains, thanks to its gentle numbing qualities.

The euphoria-inducing high of Kandy Kush may even work well for bouts of depression and the oft-associated anxiety. Remember that marijuana, in general, can be a useful tool in the fight against neglected ailments like anxiety and depression.

Although depression is considered to be a mental health disorder, it can often have a profound effect on the physical body as well. So while Kandy Kush won’t directly alleviate the physical manifestations of this condition, it may help mitigate them by getting rid of the causes – at least for some time.

Kandy Kush can also be helpful for insomnia and sleep trouble, which is why it’s often recommended as an evening-use strain. It provides a very relaxing smoke, which means it can help put your mind at ease and send you straight off into dreamland with relative ease.

Kandy Kush is extremely potent and a little can go a long way. You’re sure to savor its strong dopamine rush and uplifting calm that can become euphoric as this strain gently reduces tension and anxiety. Because this strain induces serious “munchies” it’s a fave of those seeking to boost appetite when combatting illness. Kandy Kush’s calming effects also make this a go-to choice for battling chronic anxiety and the stresses of the day.

A mixed physical and euphoric high

Since this strain does have slightly more Indica in its genetic background, a strong physical stoniness is present. However, the Sativa element of this strain shows itself in a heady, soaring euphoria. The Sativa aspects of Candy Kush help balance the effects, giving the soothing effects an unusual yet welcome energetic quality. This variety is gaining popularity for its unique blend of uplifting and deeply relaxing effects. The most effective medical uses of this strain are stress and pain relief. The low CBD content helps regulate the sedating effect, meaning that this strain has the capacity to relax without completely knocking users out.

It is notable that even with low CBD, the THC content of this strain weighs in at a very hefty 18 percent, making it one of the more potent varieties available. If grown outdoors, these plants yield at least 450 dried grams or up to 500 grams per plant if grown outdoors, or 475 to 525 dried grams when grown indoors. Since this is a Fast Flowering strain, flowering takes only seven weeks. When growing outdoors it is best to schedule for an early September harvest. When fully grown, the plants will reach a height of up to 100 centimetres indoors, or up to 170 centimetres outdoors.

As with many other marijuana strains, the side effects of Kandy Kush are minimal, and the side effects it does produce are rarely anything to be concerned about. Headaches, anxiousness, and dizziness are possible, but unlikely.

Dry eyes and dry mouth are what you need to worry about – or at least deal with – but again these are easy to bypass with just a little preparation.

Like all Fast Flowering strains, these Candy Kush plants make for an easy growing process. Even novice growers will find that it is surprisingly easy to quickly yield dense, high-quality buds with through a straightforward growing process. Candy Kush Express Fast Flowering is ideal for growers who are interested in an unusually balanced strain that is easy to grow quickly in either indoor or outdoor conditions.