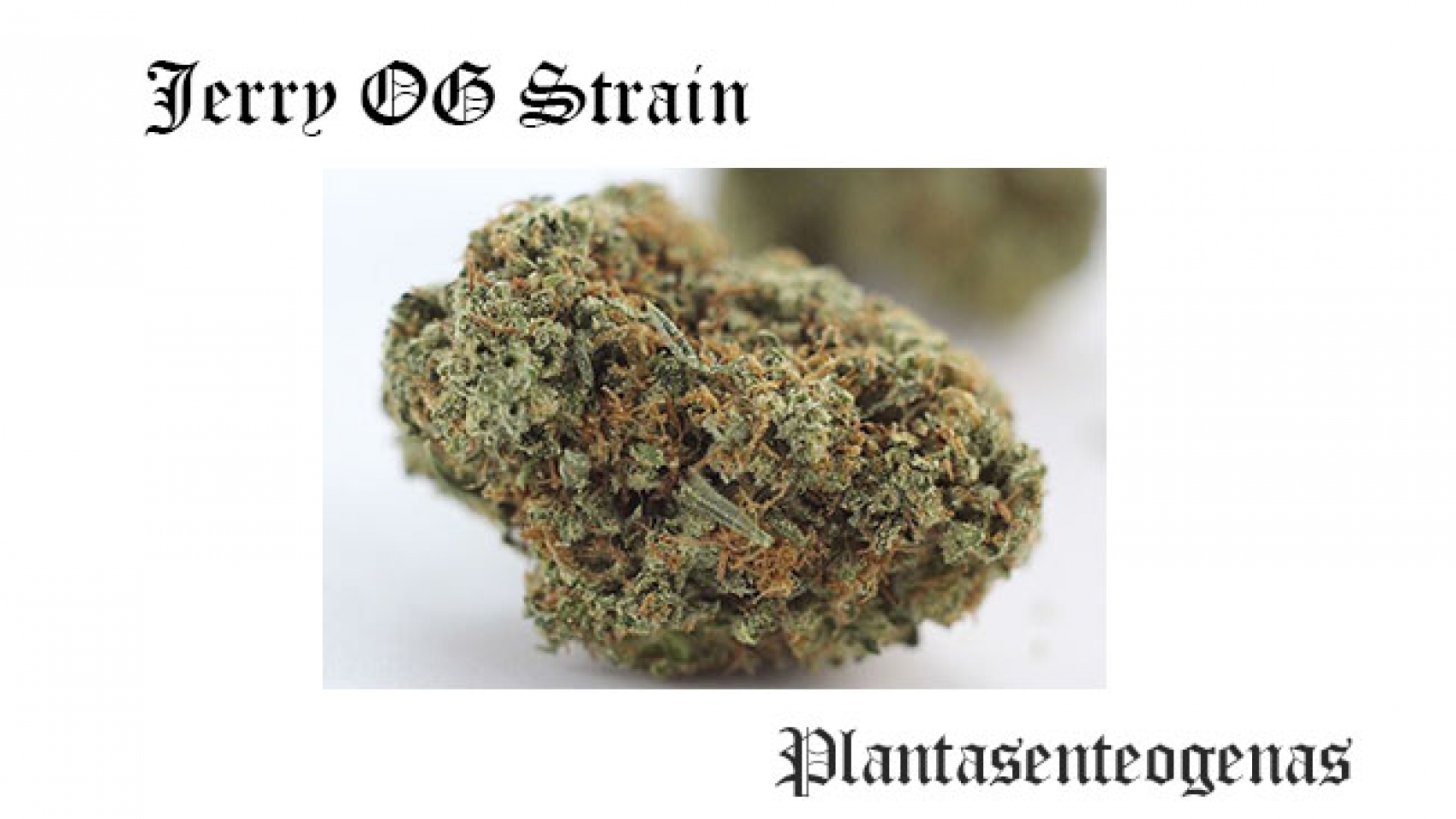 Jerry OG is a sativa-dominant hybrid cross between Jack Herer, a cerebral sativa, and Larry OG, a relaxing indica-dominant hybrid. Like Larry OG, Jerry OG was first propagated in Orange County, California, where it quickly gained recognition for its energizing and focusing high and powerful pain-relieving body effects.

This combination of uplifting mental effects and physical relaxation makes excellent medicine for the treatment of many chronic conditions, including chronic pain, PMS, muscle cramps and asthma. The cerebral effect is energetic, creative and focusing, making it an ideal strain for managing symptoms of depression or anxiety while at work or on the go. Ultimately, Jerry OG is top-tier for its powerful physical relief that won’t cause you to crash around midday, as you would with other strains with indica-dominant pain-relieving effects.

Jerry OG tends to grow tall and gangly like an average sativa. Her water leaves are a dark shade of forest green while her stalks are often lighter. She tends to grow a decent yield of dense, spongy popcorn flowers that stand out among the foliage in shades of lime and dark green. Jerry OG flowers are covered in silvery-white trichomes that give the buds a bit of an alien appearance. Her pistils are sandy brown or orange in color and curl out from the calyxes in all directions.

On the plant, Jerry OG flowers smell sweet and floral. When dried, they take on a sweet and earthy aroma of pine needles and spice. The smell is loud enough to envelop a room when the jar is cracked open. On a deep inhale, Jerry OG opens up into sweet, citrusy fruit flavors. The smoke is a little peppery, so it’s likely to make you cough a bit before the exhale. On the exhale, Jerry OG leaves you with a lasting hoppy herbal flavor and piney aftertaste. All in all, Jerry OG is a sweet and sour masterpiece that offers a great mix of effects that can help you keep your pain manageable without sacrificing your energy or creativity. If you see it at your favorite dispensary, it’s definitely worth a try.

Jerry OG is an Orange County classic best known for its energy-inducing, clear mental high and deep rooted physical relief. It’s a sativa-dominant cross between two west-coast classics: Jack Herer, a potent sativa, and Larry OG, which is a hybrid cross between OG Kush and SFV OG. In the years since it was first propagated, the strain has made its way into dispensaries all over the country, boasting potencies upwards of 20% to 25% THC.

Jerry OG is a beautiful, classic cannabis strain. She grows tall and stalky in standard sativa-dominant fashion, displaying skinny dark green water leaves and lighter-colored stalks. She offers a medium-sized yield of broad, spongy flowers that take on an alien appearance thanks to the presence of THC-laden trichomes that coat the flowers in a light silvery blanket. When the flowers dry and break away from the main colas, they take on a sagey lime green appearance with dark green sugar leaves. Each one is covered in sandy brown and amber orange pistils that curl out from the calyxes in all directions.

On the living plant, Jerry OG flowers are floral and sweet with distinct notes of OG Kush family funk and a warm spicy herbaceousness. When the flowers are cured and dried, they take hold on to that spicy kush scent. However when they’re ground up or broken apart, they open up into a sweet, citrusy and herbal scent reminiscent of pine needles.

The smells translate well into the flavor profile of Jerry OG. Once ground, packed into a bowl, and lit, the initial impression is that of sweet citrus and spice. The smoke itself is quite peppery and spicy, similar to the flavors of many other kush-family strains. However, the strains true colors come out upon the exhale. Once the strain exits the body, it leaves a uniquely sweet and herbal flavor on the tongue with distinct notes of sweet citrus, sour lemon and earth, and and herbal pine flavor. The flavor can be described as a sweet and sour tango for the tongue.

The unique scents and flavors of Jerry OG translate well into its effects thanks to the presence of Myrcene, Limonene and Pinene terpenes which help boost some of the effects of THC. With an herbal and citrusy flavor profile, Jerry OG promotes a great mix of mental cerebral effects and deeply relaxing physical effects. Many users describe the first impression of Jerry OG to be bright and uplifting, chasing away feelings of stress and fatigue with ease and leaving behind a clear-headed, energetic mental effect. After the effects take hold, it tends to creep into the body where it soothes sore muscles, eases the symptoms of chronic pain or arthritis, stops cramps and spasms, and helps with nausea. However, even with such powerful physical effects, Jerry OG is still considered a sativa-leaning strain. It works well in both the mind and body without the couch-lock or slowed down sluggish feeling that some THC-heavy indica strains offer.

The beautiful marriage between physical and mental effects promoted by the Jerry OG cannabis strain make it a great choice for daytime medicine. The strain helps without hindering and offers powerful relief without having to worry about the midday crash as you would with many other physically relieving strains. The balance of effects makes Jerry OG a good choice for soothing mental symptoms like chronic stress, anxiety, or depression as well as fatigue thanks to its clear, uplifting, energetic sensation. However, it’s also a top-tier choice for treating chronic conditions, like pain, PMS, muscle cramps and spasms, asthma, and nausea. Ultimately, it’s a great choice for daytime use and medicating on the go.

Jerry OG grows in typical sativa fashion: tall and larfy with skinny water leaves and cola-bearing stalks. She’s rated moderate when it comes to cultivation since she likes to grow, but it takes some practice to get her to grow to her full potential. She needs a lot of bending, topping, and training early on to encourage manageable growth and stalks that can support big flowers. We recommend setting up trellis netting for the tops to grow through to keep her manageable. The strain isn’t any more susceptible to pests and disease than most, but always be sure to monitor your humidity levels with Jerry OG to avoid moldy flowers.