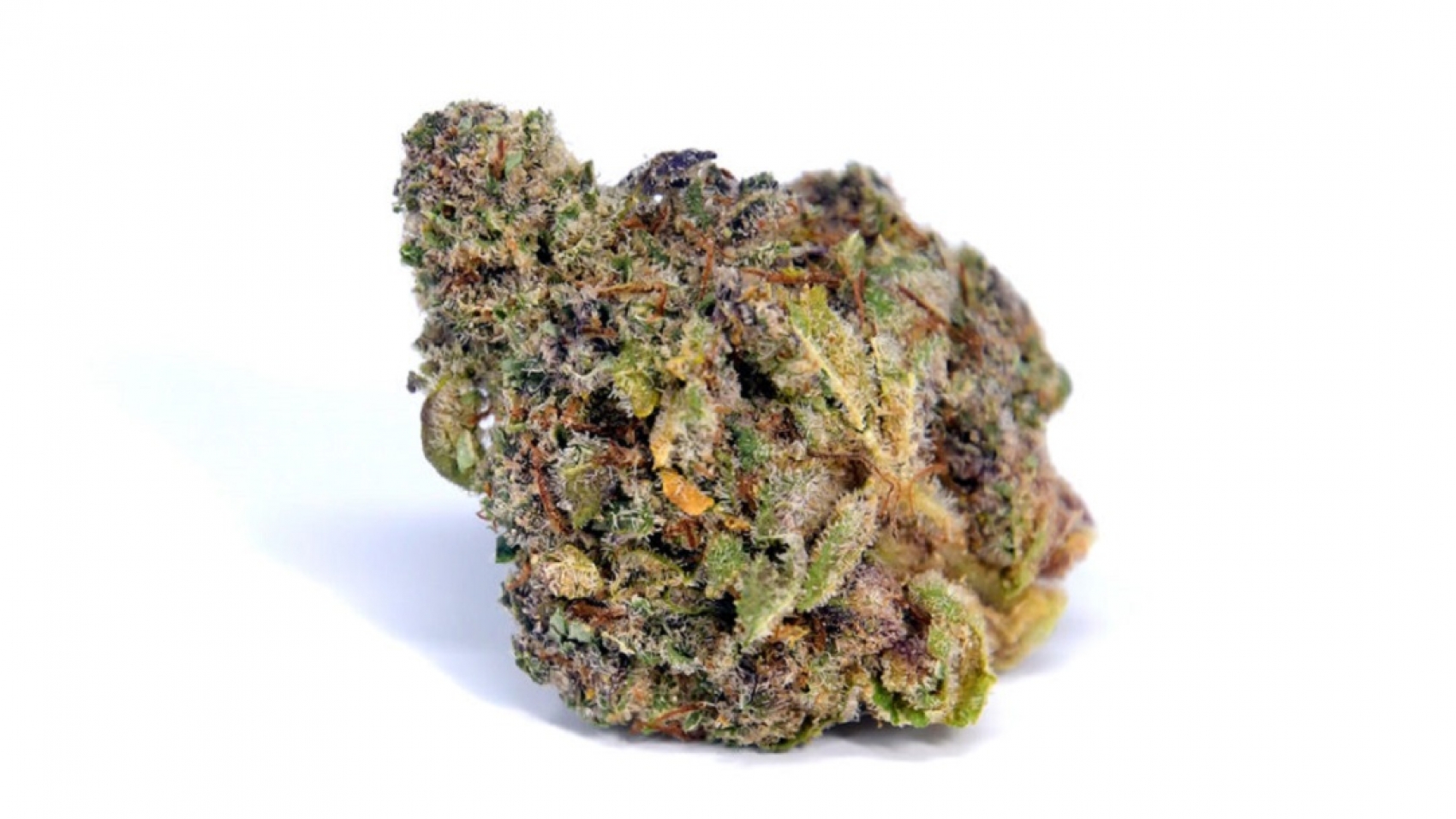 Huckleberry Hound is an obscure hybrid that has alleged roots in Blueberry and Chemdawg families. With notes of berry intermixed with a palatable melange of chemicals, this flower’s bouquet is challenging but worthwhile. Expect airy body effects that take on more weight with time and cerebral effects that remind many of Sour Diesel’s type of mental stimuli. Most Chemdawg lineage is potent, so be aware, as this strain is a howler.

Huckleberry is a well-balanced hybrid with a mysterious backstory. Its parent strains — as well its creator — are unknown, although the strain’s strong berry scent and taste suggest a Blueberry lineage. Whatever its origin, Huckleberry offers a crowd-pleasing aroma and a multi-faceted high that’s as enjoyable while out on an adventure as it is when you’re lounging on your couch. This strain’s THC content has been measured at between 8% and a staggering 26%.

Buds of Huckleberry are small to medium in size and spherical in shape, clinging together in popcorn-like clusters. These flowers have the thick and tightly-packed bud structure often associated with indica-dominant varieties. Leaves are a mossy shade of green and are threaded through with orange to red pistils. Phenotypes of the strain frequently display patches of purple in their leaves, in almost equal proportion to green; these surprising shades are the result of pigments called anthocyanins in the plant’s genetics. Finally, translucent white trichomes coat the inner and outer surfaces of these flowers, giving them a silvery sheen.

The smell of sweet and tart berries wafts up from cured buds of Huckleberry, lending credence to the theory that this strain is descended from Blueberry. The fruity aroma is devoid of any funky or kush-like scents; there are also no pronounced skunky odors. That said, grinding up or breaking open these dense buds yields some slightly spicy notes, possibly suggesting an Afghani landrace in Huckleberry’s background. When combusted in a pipe or a joint, these flowers burn with a smoke that is almost universally described as harsh and cough-inducing. This smoke tastes fruity and cloyingly sweet on the exhale. Notably, despite its purple coloring, Huckleberry has no detectable grape flavors — this is because, while the strain’s color is determined by its pigmentation, its bouquet is dictated by separate chemical compounds called terpenes.

Huckleberry’s high takes effect quickly, smacking users with a sudden uptick in higher-order processing. This stimulation of cerebral and analytical thinking is met with a strong jolt of energy. As a result, Huckleberry is an ideal strain for getting work done, whether it’s problem-oriented or more loosely-defined and creative. Alternatively, it can provide the motivation needed to accomplish mundane tasks like cleaning. As the high progresses, a mildly disorienting sense of physical relaxation begins to emerge. Smokers may feel a heaviness in the limbs (and eyelids) and a sudden desire to lounge in the closest comfortable surroundings. This combination of mental and physical effects translates into a palpable feeling of euphoria. In its later, more dreamy stages, Huckleberry’s high lends itself to trippy surroundings like atmospheric music or movies. Because of the indica sedation that creeps through on its backend, this strain is recommended for use during the day or the early afternoon.

Huckleberry’s versatile effects can be useful to medical cannabis patients as well. Its sustained feeling of clarity and focus can help those with attention deficit disorders to concentrate on a single task. Its mood-altering effects can also give patients struggling with stress or depression to gain a fresh perspective and to spend their time more mindfully and consciously. Physiologically speaking, this strain may provide moderate relief from deep-seated aches and pains. In high enough doses, it can work against stubborn instances of insomnia. Because its onset may lead to some intense, recursive thinking, Huckleberry should be consumed with caution by users who are prone to panic or who have a low tolerance for THC.

No large commercial producers have made seeds of Huckleberry available for sale online. As such, prospective growers must obtain clippings from mature, healthy plants of the strain in order to grow genetically identical “clones.” The strain may be a temperamental grow, and is not recommended for newcomers to cultivation. It can be grown indoors or out, although success outdoors calls for a semi-humid climate with daytime temperatures between 72 and 80 degrees Fahrenheit. Those looking to bring out Huckleberry’s full purple bag appeal should stimulate its anthocyanins by exposing their crops to cold (but not freezing) nighttime temperatures late in the vegetative stage. Huckleberry flowers within 8 to 9 weeks when grown indoors.

Huckleberry’s mellow, even-handed high is welcome in a wide variety of settings. It can be savored alone or shared with friends. If you do bring this fruity bud out in public, be prepared for its pleasant aroma to turn some heads.

Huckleberry Hound is a rare evenly balanced hybrid strain (50% indica/50% sativa) created through crossing the infamous Chemdawg X Blueberry strains. This celebrity child boasts a super delicious flavor and a long-lasting high that’s perfect for any hybrid lover. This baby packs a sweet blueberry floral flavor into each and every toke with a lightly spicy fruity exhale. The aroma is of earthy flowery herbs and spicy fruity berries with a rich woody overtone. The Huckleberry Hound high is just as delicious as the flavor, with a blissful combination of effects that hit both mind and body with a high level of potency. You’ll feel an airy body high accompanied by a racy head high that has you feeling euphoric and giggly with a sense of almost frenzied creative energy that has you feeling antsy and getting up and moving almost immediately. With these effects and its high 12-19% average THC level, Huckleberry Hound is often chosen to treat those suffering from conditions such as chronic fatigue, headaches or migraines, appetite loss or nausea, chronic pain and chronic stress. This bud has conical dark olive green nugs with rich purple undertones, dark orange hairs and a coating of purple-tinted milky white crystal trichomes.

Huckleberry Hound is not one to startle users at the first puff. Instead, it bides its time with a gentle euphoria that gradually intensifies. It improves the mood as it swarms every nook and cranny of the mind. No doubt, it will leave users feeling upbeat.

Its ability to enhance one’s disposition makes it an impressive recreational strain. Users may consume it with friends for a day filled with fun activities. Not to mention, it has THC levels that range from a manageable 12% to a moderate 19% which both beginners and seasoned users could pace to accommodate one’s tolerance level. In all likelihood, like-minded friends will end up giggling and laughing at random jokes or interesting conversations.

Alternatively, one could also simply use it alone to the mind and body from stress. Regardless, one of the best times to use Huckleberry Hound is right before a meal. The mental invigoration also stimulates the appetite.

30 minutes to an hour after the initial onset, a tingling sensation ebbs down from the temples. It makes its way through the back of the neck before arriving at the lower extremities. It kneads the muscles free of tension, making the body as limber as a well-oiled machine.

Huckleberry Hound boasts a sweet berry scent underlined by floral notes. It has hints of spicy earth to blunt the potential sourness. Broken apart and combusted, its buds exude a refreshing pine.

In the palate, Huckleberry Hound’s spicy flavors of wet soil take center stage before quickly dissolving into a woody pine. Swirling the smoke brings out its blend of sweet berries which, on the exhale, leave a delectable tanginess.

Users can expect Huckleberry Hound to cast the usual dry spell. It affects the eyes and the eyes the most, especially once its cannabinoids begin to interfere with moisture production. Its effects are usually mild, but one may prevent it from exacerbating by downing a few glasses of water throughout the day.

Huckleberry Hound has a myriad of medicinal benefits. One of which is stress relief. In inducing its recreational mood lift, it also soothes tired spirits, calms the nerves, and refreshes the mind. Along with the upbeat disposition, it allows the chronically stressed to withdraw the mind to a state of calm.

Its therapeutic value extends to other aspects as well. For instance, it could also be used to manage symptoms of depression, anxiety, and PTSD. The mood-enhancing onset also brings in a gentle euphoria that temporarily pushes back feelings of hopelessness and despair.

Although subtle, the light mental stimulation could also be of use to patients with a lack of appetite. It encourages users to eat meals heartily. Moreover, because it soothes the stomach, it also appeases gastrointestinal pains reducing the possibility of regurgitation, vomiting, or nausea.

Patients will also find comfort in its painkilling properties. Although moderate, its THC levels are still enough to turn it into a natural analgesic that eliminates a wide variety of pain regardless of the source or intensity. It is particularly effective against common aches and pains such as headaches, joint pains, and arthritis.