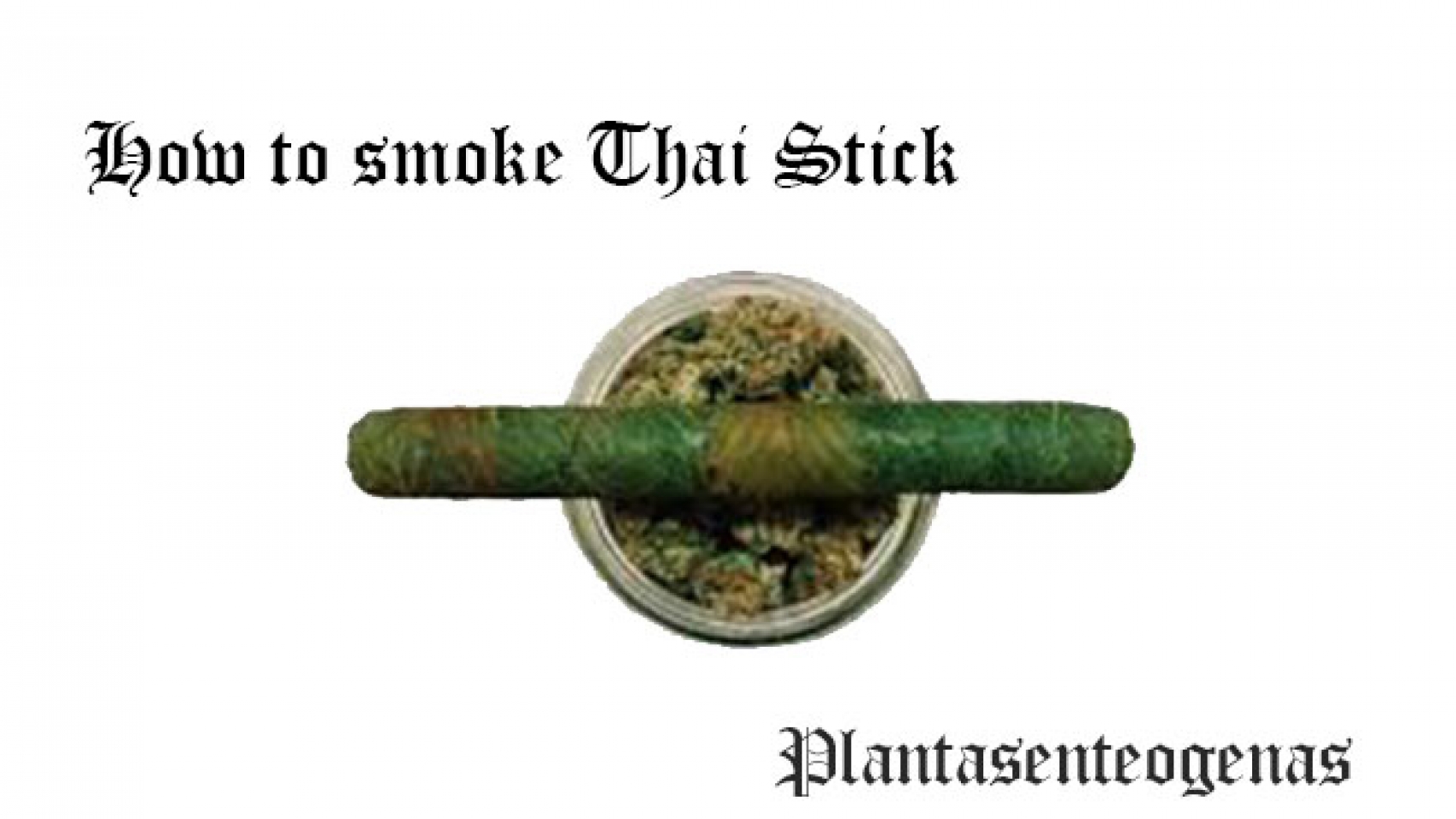 A Thai stick is an ancient form of a cannabis “cigar” deriving from Thailand, most popular in the United States in the 1970s. A Thai stick typically consists of cured flower skewered on a bamboo stick, wrapped in fan leaves and tied together with hemp string.

In the modern age of cannabis legalization and product innovation, the luxury blunt or cannabis cigar has become a more prominent dispensary item in legal regions. But the modern canna-cigar’s precursor, the Thai stick, is of ancient origin, and its basic form has barely changed since the days of its inception.

The construction of a Thai stick is, at its core, fairly simple and straightforward, though the smoking experience it provides may contrast significantly with that of a traditional joint or blunt.

Most cannabis users will be familiar with the essential elements — long stocks of cured cannabis colas skewered or pressed around a bamboo stick, then wrapped in fan leaves. The Thai stick may also possibly be dipped in concentrate and/or sprinkled with kief. When the bamboo stick at the center is removed for smoking, the remaining hole in the center allows for sufficient airflow to properly burn the pressed flower, oil, and leaf wrap.

Cannabis and its consumption is a pretty simple industry. It hasn’t lost or gained much since its use was first mentioned in writing by Chinese emperor Shen Nung in 2753 B.C.E. That’s because all you really need is the weed itself and a flame with which to burn it. Easy, right? Of course, cannabis consumption can also be as elaborate as the legendary thai sticks on which this article is based. The nice thing about marijuana is that the process is pretty much entirely up to you. Simple or complicated—the choice is yours.

Down through the years, new methods for consuming cannabis have been added to the standard repertoire. As the use of cannabis spread, the bong and the joint became the go-to ways to unleash the high that cannabis contains. More recently, dabbing  and vaping have grown in popularity. But between the bong and dabbing, there really isn’t that much to talk about.

Thai Sticks are an ancient creation of the hill tribes from northeast Thailand, though the exact timeframe of its origin remains unknown. It wasn’t until the 1960s and ’70s that the Thai stick made its way to the U.S. when American surfers and Vietnam War veterans started taking trips to Thailand and smuggling Thai sticks (possibly dipped in opium at times) into to the country.

The supply chain through which Thai sticks were smuggled to the U.S. fizzled out in the 1980s, and it wasn’t until the current boom of the legalization market that these ancient canna-cigars made a comeback. Most online sources trace the modern Thai stick movement back to a mysterious cannabis connoisseur known as afgoohead on Instagram.

Afgoo head was reportedly the first to bring the Thai stick method into the modern age by crafting a variety of cannabis cigars that followed the same pattern. His modern Thai sticks eventually caught the attention of other aspiring cannabis cigar makers such as Roger Hinkley and Nathan Zeeb, co-founders of Artisan Kanna Cigars, who would then take the Thai stick concept and recraft it to make modern canna-cigars for the modern cannabis connoisseur.

How Do You Make a Thai Stick?

First, take your bud and skewer it with a bamboo stick, kebab-style. Long before Americans got their hands on Thai Sticks, it’s believed that the bamboo skewers were dipped in opium, which obviously launched smokers into a wild high. Today, however, hash oil or sugar water is used to coat the skewer, helping the seedless nugs mold around the stick. The choice between using hash oil or sugar water depends on how high the smoker wants to get.

Once the cannabis secures tightly around the stick, the buds are then wrapped in plant material, tied with hemp wick, and vacuum-sealed to cure. Most smokers choose to wrap their Thai Sticks in leaves from the marijuana plant, similar to the way Southeast Asian cuisine uses banana leaves to wrap certain dishes. In other words, you can tailor your Thai Stick to your preferred method of smoking.

First, separate the fluffiest buds from the rest of your stash. The fluffier the nugs the better because they are easier to pack and compress in the next step.

You might think you should go for the densest buds you can find in order to make things more intense. Wrong! Really dense buds can make the smoke too harsh. No one wants that.

Coat the stick of your choice with hash oil or sugar water to make it slightly sticky.  We like bamboo skewers because they come in various sizes, have a point (which can be useful at various stages), and don’t change widths from end to end. You could also use metal skewers in a pinch.

Chopsticks work well, but they often get bigger toward the top which can make your Thai Stick look weird. I know, “Who cares how it looks,” right? But presentation is an important part of every smoking experience.

Once you’ve chosen your stick and coated it with hash oil or sugar water, bind the buds to the stick using the hemp string. At the end of this step, your Thai Stick should look something like this.

When you’ve completed step 2, you’ve ready for the most difficult part of this whole process:  waiting. Thai Sticks take a long time to produce and you’ll be waiting at least a day at various points during production so get used to it now.

Before you start twiddling your thumbs, wrap the “cigar”–stick, bud, and hemp string–in parchment paper and store in the refrigerator for a few days or until the nugs solidify into one piece.

When a few days have passed, or when you just can’t stand it any longer, carefully unwrap the hemp string from the stick. This is where the coating of hash oil or sugar water comes in handy. If you didn’t use enough, the buds will fall off the stick when you unwrap the string. That’s why it’s better to err on the side of caution and use just a bit more.

After you’ve removed the hemp string, coat the bud stick with a light layer of hash oil or sugar water and then wrap the whole thing in the washed leaves from a growing MJ plant.

At this point, some Thai Stick producers suggest that you re-wrap the string and replace the whole thing in the refrigerator for twenty-four hours. That’s certainly an option, but, ultimately, you’re going to need to wrap the Thai Stick in three layers of washed leaves. That means an extra three days of waiting.

To speed things up, after you’ve applied the first layer of leaves, add another coating of hash oil or sugar water. Then, apply a second layer of leaves. Repeat this process one more time for a total of three layers of cannabis leaves.

Regardless of how many leaf layers you apply, rewrap the stick in parchment paper and warm it on a hot plate or in a pan for a few seconds. This step warms the oil and allows it to spread under the leaves and permeate the bud. It also helps make a perfect seal between the layers of leaves.

When you’ve finished heating the stick, rewrap the cigar in the hemp string and parchment paper, place it in the refrigerator, and let it cure in the low temperatures.

How to smoke a Thai stick

Thai sticks and canna-cigars may burn as slow as a quarter-inch per hour. They should be smoked in a similar fashion to a cigar, only with more inhale once the end is sufficiently lit. Using a torch may provide the optimal lighting, though Thai sticks can also be lit with a lighter or hempwick. Once the entire end is glowing red, you can start to inhale. Don’t inhale while lighting because you’ll essentially be inhaling the flame through the hole in the middle.

What’s the difference between the traditional Thai stick and a modern-day canna-cigar? In short, not much. Whether you’ve seen them in a dispensary and seen them labeled as cannabis cigars, canna-cigars, or cannabis caviar, you’re likely looking at some variation of the Thai stick. Rather than coat the Thai stick in opium, as the original creators might have done, most modern Thai stick makers opt for coating the cigar in high-quality concentrates and/or kief.