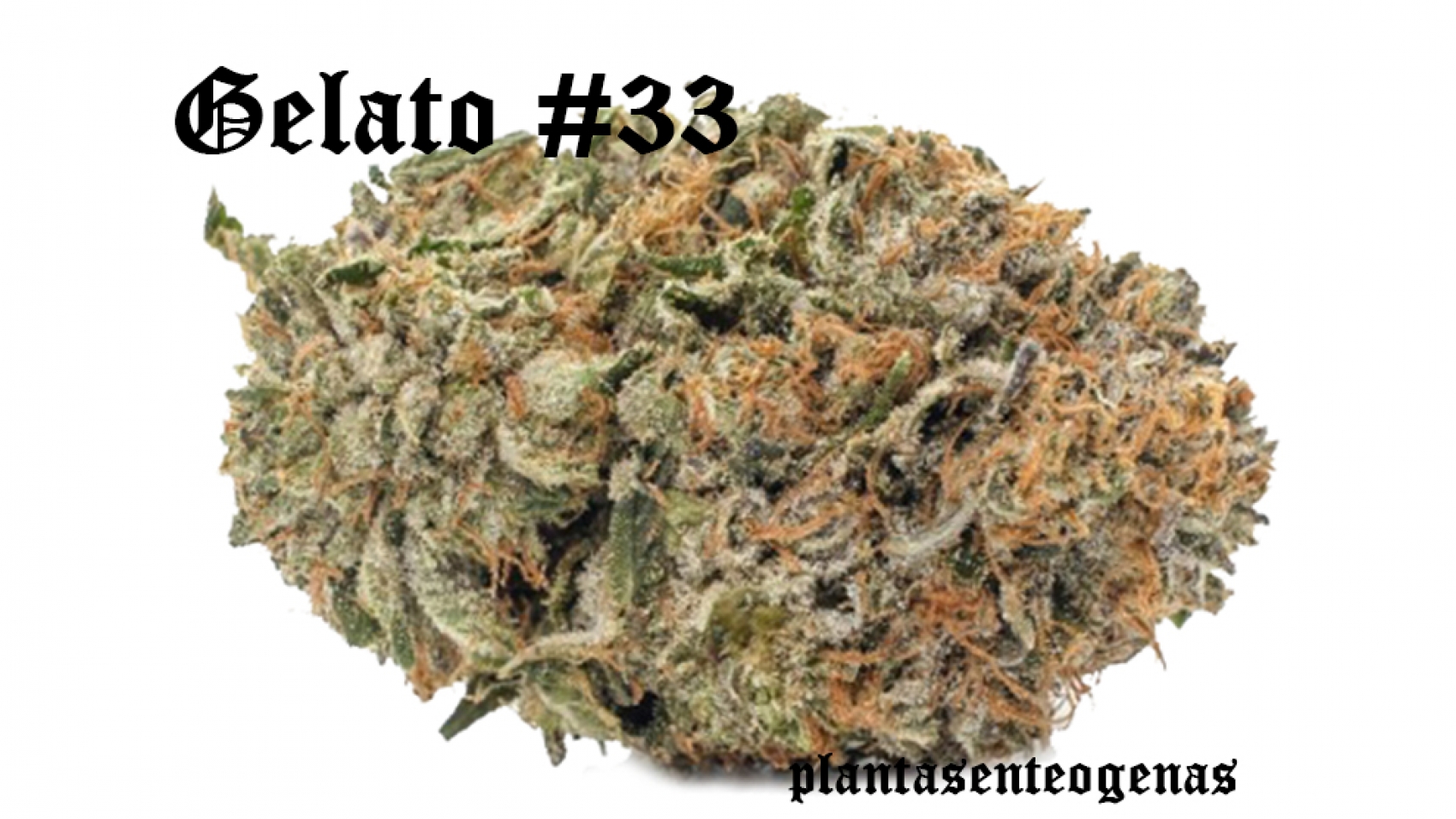 Gelato is a cross between Sunset Sherbet and Thin Mint Girl Scout Cookies, named in homage to its sweet aroma. Also known as Larry Bird, Gelato (#33) was first cultivated in Northern California’s Bay Area and is derived from a deep bank of genetics created by the Cookie Family, the Sherbinskis family, and cultivator Mario Guzman.

The cultivators parted ways following its creation, and the cultivator who possesses the most “stable version” of Gelato genetics is up for debate. Cookies cultivates a few phenotypes and descendants of the strain named Gelato #42, Dolce Gelato, and a sun-grown Gelato. Sherbinskis grows four stabilized Gelato phenotypes in its rotation as well: Gelato #41 (Bacio Gelato), Gelato #43 (Gello Gelato), Gelato #47 (Mochi Gelato), and Gelato #49 (Acai Berry Gelato). Per Sherbinskis, the #33 phenotype is no longer in cultivation.

Just like at an actual gelato shop, you get several different varieties to choose from with the indica-dominant hybrid strain Gelato from the legendary Cookie Family.

The Cookie Fam has released several varietals of Gelato, with each assigned its own number. For this review, we went with the highest-shelf and most popular choice: Gelato #33, also known as “Larry Bird,” ironically named for the jersey number of the only NBA player who probably never smoked any weed.

There were a few other Gelato strains available at Cookies SF on my visit. Gelato #25 was the most noticeably pungent of the bunch. Gelato #41 was visibly teeming with the most orange hairs. Gelato #45 has the highest THC content, weighing in at 26.7 percent THC. All of them are sweet-smelling and potent. But Gelato #33 is the most well-known and popular, so that’s the Gelato we put to the taste test.

This strain is from the Cookie Family, so you know there will be some Girl Scout Cookie — that is, the Cookies with the infamous F1 phenotype of Durban Poison — in the mix.

Gelato #33 is a cross between OG Thin Mint Girl Scout Cookie and Sunset Sherbet, a lineage made clear by its minty-sweet aroma and impressive prevalence of orange hairs.

Upon firing up this particular Gelato, the head high hits you immediately — like, before you’ve even exhaled. The taste is a thick, woody smoke with a refined lavender aftertaste. Right from the first puff, Gelato #33 boldly announces itself as premium, top-quality bud.

The cerebral, heady high is outlasted by a more relaxing body effect. This is, after all, an indica-dominant strain with high THC. This strain seems ideal for low-impact outdoor activities like hiking or walking, with a mind-expanding euphoria that hits quickly and allows for focus and concentration. But within 10 to 20 minutes, that head high evolves smoother and more physical body calm that remains for close to an hour.

That said, if you’re at risk for paranoia or depression, then the strong Gelato #33 might not be the best strain for you to use. The initial powerful head high is indeed conducive to concentration, but also has the potential to set you on a negative head trip if you’re not in a good space mentally.

A fun little burst of energy came with my first few puffs of Gelato #33, giving way to a more relaxing sense of rest. In that sense, the effect of this Gelato really is kind of like a sugar buzz.

These flowers look like dense and compact tiny little boulders, all somewhat ovular and football-shaped. They’re dark green with clearly visible purpling, orange-red hairs and frosted with a coating of crystals.

Gelato 33 has a rich, grape aroma with sweet undertones that complement its overall fragrance. Crushing and combusting the buds intensifies its tanginess but also brings out an earthy floral with hints of mint.

Immediately after the first toke Gelato 33 catches the attention of users with its thick earthy smoke and floral notes. It eventually develops sweet but tangy notes from its grape overtones. Enhancing the overall experience is its minty aftertaste.

A dreamy head high upon first contact, followed by a lengthy, physically relaxing body high. The effect lasts for up to an hour, but does allow for physical functioning.

The body high is useful for eliminating moderate physical pain or muscle spasms, or as a general analgesic. The strain has a relaxing feel and is useful for combating irritability.

Many users highly value this strain for its medical uses. Known to treat pains, chronic aches and alleviate stress with its powerful effects. Those suffering from headaches and migraines have been known to use it as treatment. Offering a carefree, uplifting mood and also said to offer relief from mental health issues, such as PTSD, depression and anxiety. However, repeated and excessive use is known to result in the opposite affect, causing bouts of anxiety or depression. Furthermore, its low CBD to THC ratio is also a worry for long time, consistent users. CBD typically counteracts negative affects associated with cannabis consumption, alongside helping with mental health. Once again, this is one potent strain that even experienced users struggle to tame. As such, we advise that you take it slow and enjoy yourself.

There is no escaping Gelato 33’s dry spell. As such, users will have to brace for the cottonmouth and some mild irritation in the eyes. It is rarely a cause for concern, but users may want to down a tall glass of water as it tends to last for hours.

Gelato #33 cannabis strain gives a strong cerebral and body high. It starts with an euphoric boost that is uplifting, happy and focusing. Even in this euphoria, you feel very relaxed and calm.

The strain is considered a challenge to grow, and each phenotype expresses different growth characteristics. Indoors, it produces relatively short plants with dark, magenta buds that typically mature within 8-9 weeks of entering the 12/12 flowering cycle. Outdoor growers can expect Gelato to reach maturity by mid-October in the Northern Hemisphere, and mid-March in the Southern Hemisphere.

Because its seeds aren’t commercially available, potential growers must find certified Gelato clones from Cookies to propagate it. Sherbinksis does not sell clones or seeds of its Gelato phenotypes at this time.

An auto-flowering type, Gelato seeds typically flower within 8 to 9 weeks when grown indoors. Growers can expect an above average yield for both indoor and outdoor cultivation. Harvest time is typically at the beginning to the middle of October for outdoor grows. Gelato seeds and cannabis is highly resistant to bacteria, mites, mildew, molds and more. This seems like the dream plant, offering a bountiful reward of high grade, sought-after buds. However, most of the challenge lies in growing the Gelato plant. The original cultivators have not released any information on how to properly raise these plants, becoming an industry secret. For help on where to start, this grow diary features a week by week cultivation process.

On average, plants heights range from short to medium sized, offering buds with 18 to 25% THC content. However, these buds contain only 0.1% CBD, known to counteract some negative affects of THC. On the other hand, beginners shouldn’t seek strong strains like these. Of course, that won’t stop many people, so if you do decide to sample Gelato for the first time, be sure to go easy. Although highly coveted, Gelato plants are known to be difficult to grow. As mentioned previously, competent cultivators will be expecting an above average Gelato yield, whether grown indoors or outdoors. However actual amounts are often unknown, as cultivators are notorious for closely guarding their yields.

Although Gelato 33 is a solid choice of strain, there are many other options. Whether you want something that leans more towards sativa or indica or another tasty hybrid, here are some alternative choices.

Many people call this Gelato a “daytime” smoke, but I would save it for days with short to-do lists and lots of opportunities for relaxation.