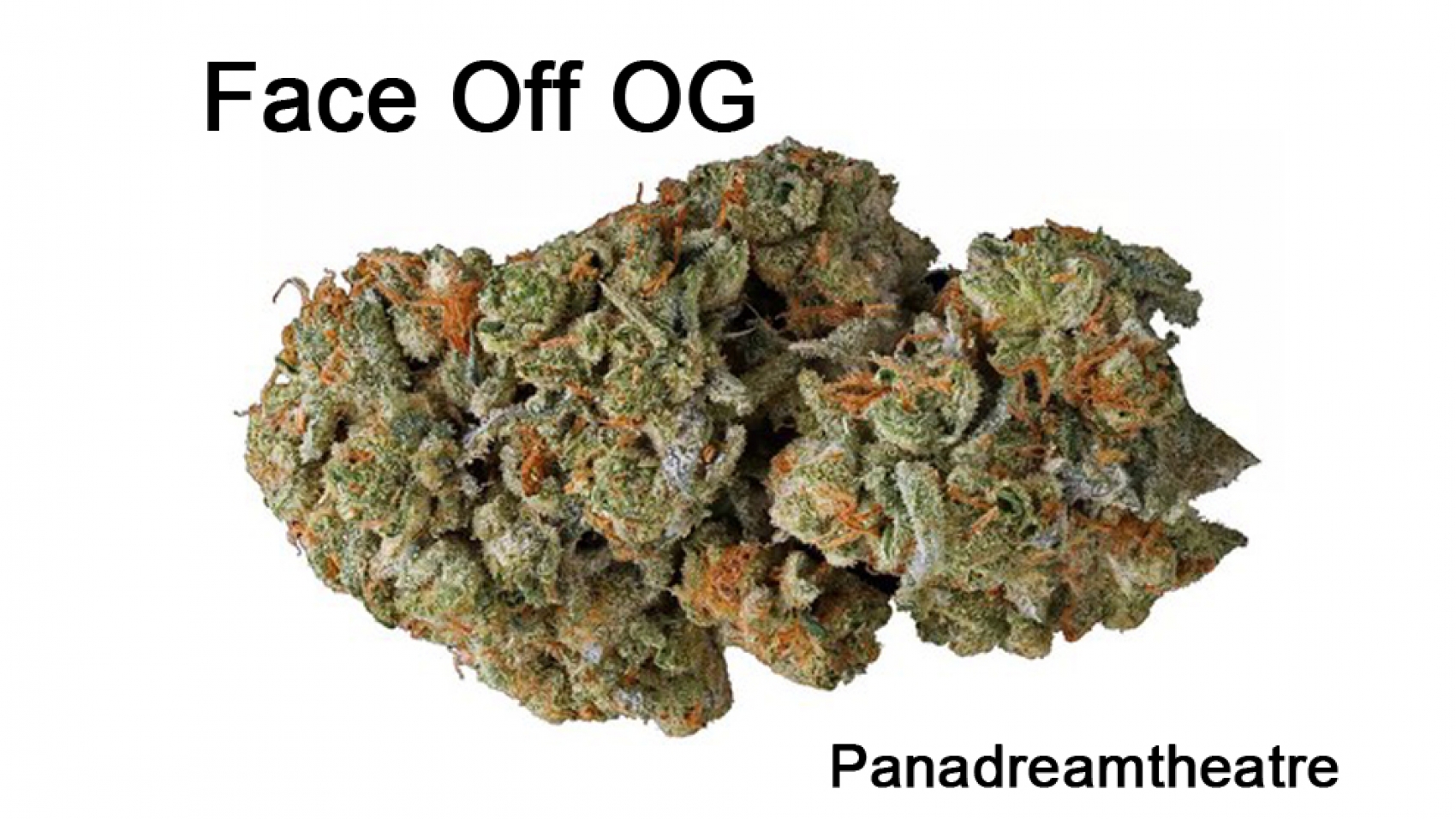 Face Off OG strain is a relatively mysterious Indica based hybrid. It has some rare OG Kush phenotype, whose seeds were given as a gift to the strain’s creators – professional breeders from Archive Seeds. The strain shares the name with a 1997 action movie starring Nicolas Cage and John Travolta. In that film’s plot, the main characters swapped faces, and that is an exact feeling that the high from Face Off OG cannabis brings.

The Face Off OG strain was probably not named after the action hit, Face Off, released in the 1990s. The strain was likely bred several years before the movie was made. Nonetheless, like the movie, it provides users with two very different viewpoints. On the one hand, you get an electrifying buzz; on the other gentle sedation.

About Face Off OG Strain

There is some debate over this indica dominant hybrid’s origins. It is likely a cut of an OG Kush phenotype. A handful of breeders received the seeds, and Archive Seeds is the company that created cuts from the mother plant.

Consumers describe the strain as incredibly potent; indeed, its THC levels range to approximately 20%. According to users, even advancers can be overwhelmed by its high. They describe Face Off OG marijuana’s taste as herbal and earthy with a peppery aftertaste. Due to its sedative properties, it is recommended for nighttime use.

Face Off OG’s initial effect is sativa-like despite its indica leanings. You can expect to feel a euphoric cerebral high that improves your mood. Users also report feeling an increase in their energy levels for a short period. This is the time to complete any leftover tasks quickly.

However, you need to work fast because when this strain’s effects hit the body, all bets are off! After a while, the intense body high becomes overwhelming to all but those with the highest THC tolerance. A few hours after use, Face Off OG will make it difficult to fight sleep.

The effects provided by the strain start from a tingly feeling in the head and over the face and spread through the body with a warm sensation. The euphoria that Face Off OG weed delivers is absolutely relaxing with a little dizziness and body buzz. There is no focus or motivation; there is just full body and mind restful peace that progresses into sleep with this strain. Users claim it to treat any muscle tension, headaches, migraines, arthritis, chronic or temporary pain, and emotional issues like depression and stress.

Even a cursory smell of the buds will provide you with a pleasant sweet and spicy scent. As it is a potent strain, it is also rather pungent, especially when you light the buds. After you grind them up, you might get hints of pine and wet soil.

The citrus taste you get on the inhale comes as a surprise to a lot of users. After all, there is little evidence of this from the scent. Many users also say they get the sweetness and spiciness they expect from the aroma, along with a piney aftertaste.

The Face Off OG buds are dense and have an aesthetically pleasing lime green color. This ensures that the coating of trichomes and red pistils are even more noticeable.

You will find that it is impossible to get your hands on Face Off OG seeds. Instead, you’ll have to make do with cuttings of a healthy mature plant. From there, you can create genetically identical clones. One advantage of this process is that you don’t have to go through the seed germination process. Another bonus is that you’re guaranteed feminized plants with no male plants there to cross-pollinate.

You have the option of cultivating Face Off OG outdoors. However, it prefers a stable climate and doesn’t fare well if exposed to extremes of temperature or humidity. It is also a tough strain for novices to grow as it requires a lot of maintenance and could be susceptible to pests and mold. When grown outdoors, it could yield around 12 ounces per plant and is ready for harvest by mid-October.

When you cultivate this strain indoors, you get to control the humidity and temperature of the grow room. You will get better results from a hydroponic system, but that requires a certain level of experience. It is advisable to use the Screen of Green method to maximize yield. Speaking of which, Face Off OG can provide approximately 12 ounces per square meter planted. Its flowering time is 8-9 weeks.

Within the average range, The Face Off OG strain will have a THC percentage of 18-20%.

Tests have found that this strain has a low CBD concentration, usually 0.1% or less.

While it is a potentially useful option for MMJ patients, it is best if only experienced cannabis smokers try the Face Off OG strain. One of its main uses is to help people get to sleep. It would help if you used it a few hours before bedtime due to the initial stimulation.

However, once the body high takes over, it is goodnight! Your limbs feel heavy, and you will struggle to keep your eyes open. This sounds like an ideal scenario for individuals with insomnia.

Interestingly, you could try Face Off OG to ward off fatigue for a short period. However, it is perhaps better to use it in the evening to reduce any feelings of stress. The sedation it causes might also prove helpful if you have chronic pains and aches.

Side Effects of the Face Off OG Strain

As is the case with most cannabis strains, the Face Off OG strain could cause dry eyes and cottonmouth. It might also cause dizziness and mild headaches amongst novices. Please note that it will eventually result in a feeling of sedation. Make sure you don’t have any important tasks to complete before you start using this strain.