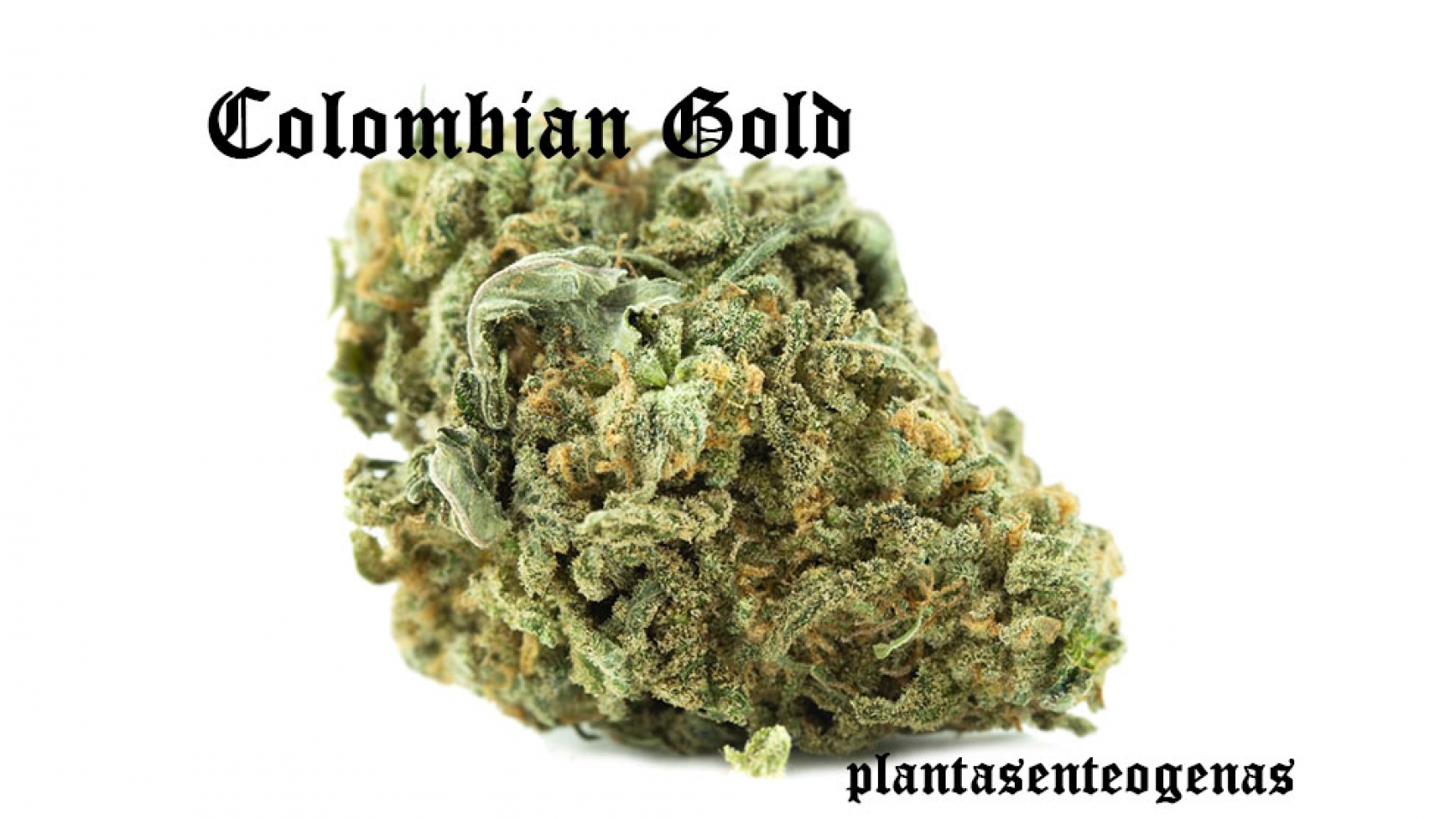 Back in the old days during the gold rush, people from all over the region came to mine for gold. Carrying with them a life-long dream of unimaginable fortune, they worked hard. Day after day, night after night, they kept digging. While many returned home empty-handed, a few were fortunate enough to strike the gold veins.

Unknown to prospectors and miners, there is a gold mine in Colombia’s arid mountains of Santa Marta. Out in the open and plain sight, a landrace marijuana strain has persisted for centuries. Aptly named, it features feathery buds coated in sticky and fiery orange trichomes. Its golden colors, though, is a result of intervention more than a natural occurrence.

What cultivators do to the mature plants is they remove a black strip from the main stem. Doing that is meant to restrict the flow of water and nutrients. As the leaves dry and fall off over the next days, its dying flowers start to turn yellow. And that is how they produced Colombian Gold that exploded in the market back in the 1970s.

With its energizing buzz, its Sativa effects have remained a gold standard for many of its users. It is also among the genetic bases of many of the foremost breeders in the industry.

Colombian Gold comes with a high amount of THC. Even so, it is not a fast-acting strain. It may take a few minutes before its effects begin to manifest. Once it does, it starts with an intense euphoric buzz and an endless supply of energy.

Its users, feeling exhilarated, are likely to experience having mental clarity. Powered by the strain, focusing becomes laser sharp as users can lock in on tasks at hand. Not to mention, many also feel more creative with ideas freely flowing into the mind. Emotionally, the euphoric head high has an uplifting effect on the mood. One of the things that make Colombian Gold unique is that the cerebral buzz, while intense, is not overwhelming. Used in moderation, it does not lead to a mind-bending psychedelic experience. In most likelihood, its smaller Indica side plays a role in keeping it stable.

As the physical effects creep into the body, the uplifting sensation turns into whole-body relaxation. While pronounced, it remains gentle. As such, there are no sedative effects that can cause lethargy or cloud the mind.

A marked skunky odor is present in Colombian Gold. It may very well be the reason why the Hall-of-Famer Skunk #1 has its distinct scent. It also emits a lemon and lime aroma that becomes more pronounced as users break its bud. Once combusted, an earthy smell becomes noticeable.

Due to its pungent and harsh fumes, the smoke from the strain can be rough on the throat and the lungs. On the inhale, a sweet and citrus note adds to the pleasant experience. Upon exhaling, it leaves a skunky and woody aftertaste.

Using this marijuana strain results in users having dry mouth. In some cases, a few people may even feel paranoid or anxious. Such effects are often mild but can be quite pronounced. While it is not dangerous at all, it may be uncomfortable for the beginners. To a lesser degree, other conditions may occur such as having dry eyes and feeling dizzy.

Since the 1960s, people have turned to Columbian Gold to ease a number of medical ailments.

The bar cannot go any higher when it comes to the Colombian Gold. Already hailed as one of the elites among the few elites, this is premium marijuana that does not only appeal to recreational users. In fact, it is the same effects it induces that have indirect medical benefits.

As a mood-enhancer, its value for people battling depression cannot be overstated. Anyone who has ever tried to talk one out of the blues should know it is often an exercise in futility. A couple of tokes of Colombian Gold and that should bring life to an otherwise dismal mood. Its uncanny ability to cause a euphoric cerebral high can eliminate stress within minutes of its full effects. As mentioned, it gives users unlimited energy. People use it to stay active and productive or to fight off fatigue.

During the comedown, most people feel tired and sleepy after such an intense experience. Because of that, it is best used during the late afternoon or early evening. During the height of its Sativa effects, it allows people to complete their tasks. As its effects wane, it becomes conducive to getting quality sleep.

Just as legendary as its effects are this strain’s scents and tastes. Seasoned marijuana consumers will instantly recognize the lemon skunk aroma. A pretty pungent strain, this isn’t recommended for cannabis consumers looking to remain discreet. On the inhale there is more of that classic lemon skunk, with lime and sweetness lingering. A slight herbal taste reveals itself on exhale.

Featuring up to 20% THC, Colombian Gold is quite potent for a landrace strain. It features a skunky, pungent aroma with plenty of musk and hints of freshly turned soil. This Colombian Sativa grows a little shorter than other common varieties, like Thai. It is also well-suited for growth in California and Hawaii.

You may have heard that all that glitters is not gold, but the idiom doesn’t apply here. This strain’s fluffy nugs are coated in a layer of amber trichomes, given these nugs a delightful golden appearance. Spring green leaves and bright orange pistils are submerged under the crystals as if they’d been touched by King Midas himself. All those crystals make for some sticky weed — marijuana consumers will want to have a grinder on hand to break this strain up.

This Colombian Sativa grows a little shorter than other common varieties, like Thai. It is also well-suited for growth in California and Hawaii.

Indoors, expect the plant to have a flowering period of 10 to 12 weeks. Being a high yielding strain, growers should look forward to a production of not lower than 14 ounces for each square meter.

There’s a caveat, though. Since the strain emits a pungent odor, growers who want to maintain their privacy should invest in odor control filters.

The best way to cultivate the plant is in its natural environment. It thrives in temperate to warm climate and can grow to 6 feet tall. The flowering period should fall between the third to the fourth week of November. Under expert care, it can produce an abundant yield of 18 ounces of buds or more per plant.