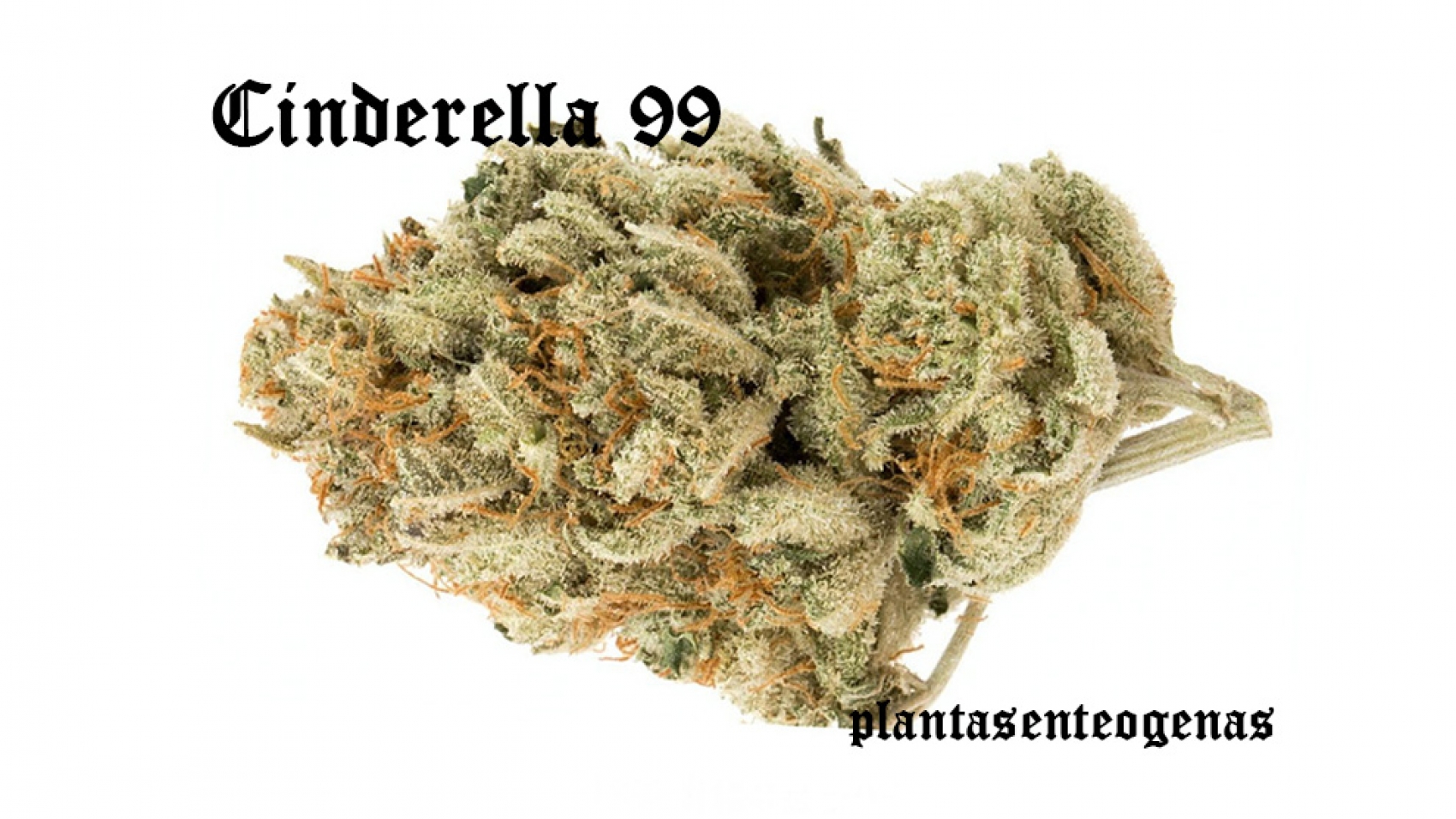 Cinderella 99 (also called Cindy or C99) is a powerhouse hybrid with humble beginnings.

In the late 1990s, Mr. Soul — founder of Brothers Grimm Seeds — discovered a few seeds inside a Jack Herer bud that he purchased in an Amsterdam coffee shop. He grew one into a cultivar named Princess, which reportedly provided a much more psychedelic experience than other strains on the market at the time.

From there, he aimed to create a super-strain that would allow him to share Princess with the world. First, he paired a Princess female with a Shiva Skunk male to add plant strength, and used a triple backcrossing method called “cubing” to create the parent strain Cinderella 88. Finally, he bred Cinderella 88 with Princess once more to achieve what breeders call the Holy Grail of Hybrids — Cinderella 99.

The name Cinderella comes from the fairy tale heroine, who — much like the cultivar — had modest beginnings, but bloomed into royalty. Consumers savor the strain for its fruity, floral aroma, thanks to a hefty presence of linalool.

Cinderella 99, often referred to as C99, is a Sativa-dominant hybrid that tastes of fruit with dank undertones and has a THC count of nearly 22%. Users should be aware that it can take up to 15 minutes for its full effect to be felt once ingested. People typically feel a very light and dreamy body high with waves of uplifting mood and euphoria, accompanied by increased levels of energy and creativity. The effects can last up to 90 minutes. Side effects include dry mouth and eyes, paranoia, headaches, and dizziness.

This strain is great for daytime use. It works well to help patients cope with stress, anxiety, and depression. It is also helpful for treating mild but chronic ache and pains and migraines. Cinderella 99 eases inflammation, increases appetite, and combats nausea. It is an energy booster for people suffering from fatigue.

Through a long process of back-crossing over three generations, Cinderella 99 was created by Mr. Soul of the Brothers Grimm. The result is a cross between Princess and Cinderella 88, which was bred specifically for indoor setups. The strain is rather short for a Sativa and rarely grows over 100 centimeters. Growing well in hydroponics, Cinderella 99 can reportedly produce up to two pounds per square meter (or 1,000 watts). Recommended for moderately-experienced growers, this strain finishes flowering in about fifty days.

This mostly-sativa strain has created a fan following of its own due to its potent effects. Cinderella 99 can makes users experience a very vivid, and potent cerebral high. A headrush isn’t uncommon immediately after smoking your first puff of this sweet bud. Cinderella 99 is all about the dreamy, uplifting effects, giving you lots of energy to complete your tasks with, which is why this flower is such a popular daytime strain. Cindy has a light body high, mixed with a feeling of happiness and being invigorated and elated, smiling from ear to ear and generally harboring only good vibrations.

There are many popular strains that are direct descendants of the Cinderella 99. Read our full review on Willy Wonka Strain that was created by combining Chocolate Trip and Cinderella 99

This sweet hybrid also leaves you feeling euphoric but relaxed at the same time, being able to let go of all your day’s troubles and worries. Cinderella 99 is perfect at providing you with lots of energy and focus to truly get you through your day, inspired and with a positive mindset.

Cinderella 99 is a skunky variety that will make the room smell like a basket of citrus fruits. This hybrid smells especially sweet and will remind you of a field of pineapples, just before harvest. A fruity whiff will hang in the air long after you have left the room, as this strain is of the especially aromatic kind.

Cindy has a very special tropical taste that will coat your mouth with an earthy sweetness. Cinderella 99 has a very distinct sweet fruity flavor that is much derived from its aroma. This hybrid will make the smoke taste like citrus and candy all at once.

Usually bright green in color, Cinderella 99 cannabis plants hold more resin than you might expect from a sativa-dominant strain, thanks to their Shiva Skunk heritage. They’re shorter in stature than some sativas, as well, usually sticking to no more than 3.5 feet in height.

This strain can cause some minor side effects, especially to less experienced smokers. A slight bout of paranoia may occur in some when smoking Cindy 99, not usually lasting long but sometimes turning into a longer lasting nervousness and uncomfortable anxiety.

The most prevalent adverse effect from smoking this bud is a case of cottonmouth and the feeling of being slightly parched and even experiencing a case of dry and itchy eyes. Cinderella 99 is quite potent and should be approached gently and it can also cause a bit of dizziness in some.

This potent strain offers medical marijuana patients relief from a number of conditions, symptoms and ailments.

Cinderella 99 is a very popular strain in the medical cannabis scene. It is widely used for the treatment of chronic stress and its symptoms. This hybrid has very strong relaxing properties, that are made even more practical because of your ability to still focus with a clear head while on this high.

While Cinderella 99 is an excellent recreational strain, making for a fun, energetic high, it also has numerous medical benefits for those seeking a bit of healing on the side. Medically, Cinderella 99 can help alleviate any stress, anxiety, or depression you’re experiencing, easing you into a more uplifted mood. Patients have also found Cinderella 99 cannabis seeds to help them relieve mild pain and migraines, and the strain can battle nausea and increase appetite, making it a suitable choice for people undergoing chemotherapy cancer treatments, or struggling with an eating disorder like anorexia. This strain is also effective for the treatment of mood disorders. Anxiety and depression have been eased with the regular use of this plant, as Cinderella 99 is mood altering and can cause you to experience a soaring sense of positivity and being uplifted.

Cinderella 99 is also useful in managing pain, and it is therefore applied in the fight against common aches such as muscle spasms, joint pains and migraines. Because this strain is energizing, it is also a great tool to combat fatigue with. Cancer patients have also been given this strain to help encourage a healthy appetite as it can give you a good case of the munchies.

Cindy is a high-yielding crop that is fairly easy for both amateurs and veteran growers to cultivate. If kept outside it has an even higher yield, as long as you keep the plant sheltered and bask it in a lot of sunshine. This strain has a high resistance to common diseases, as long as you keep it nice and dry.

Cinderella 99 takes around 7 to 9 weeks to flower and become ready for a hearty harvest. This strain can yield an estimated average of 16 ounces per square meter of good and fruity bud.

This hybrid likes a dry and sunny outdoor environment. Cindy 99 cultivated outdoors can yield around 35 ounces of bud per plant, and can be expected to be ready for a harvest around late September to early October.

Also known as Cindy or C99, Cinderella 99 is a popular sativa-dominant strain fathered by the famous Jack Herer cannabis plant. High in THC (our version is around 22%), Cinderella 99 cannabis seeds grow into potent plants.