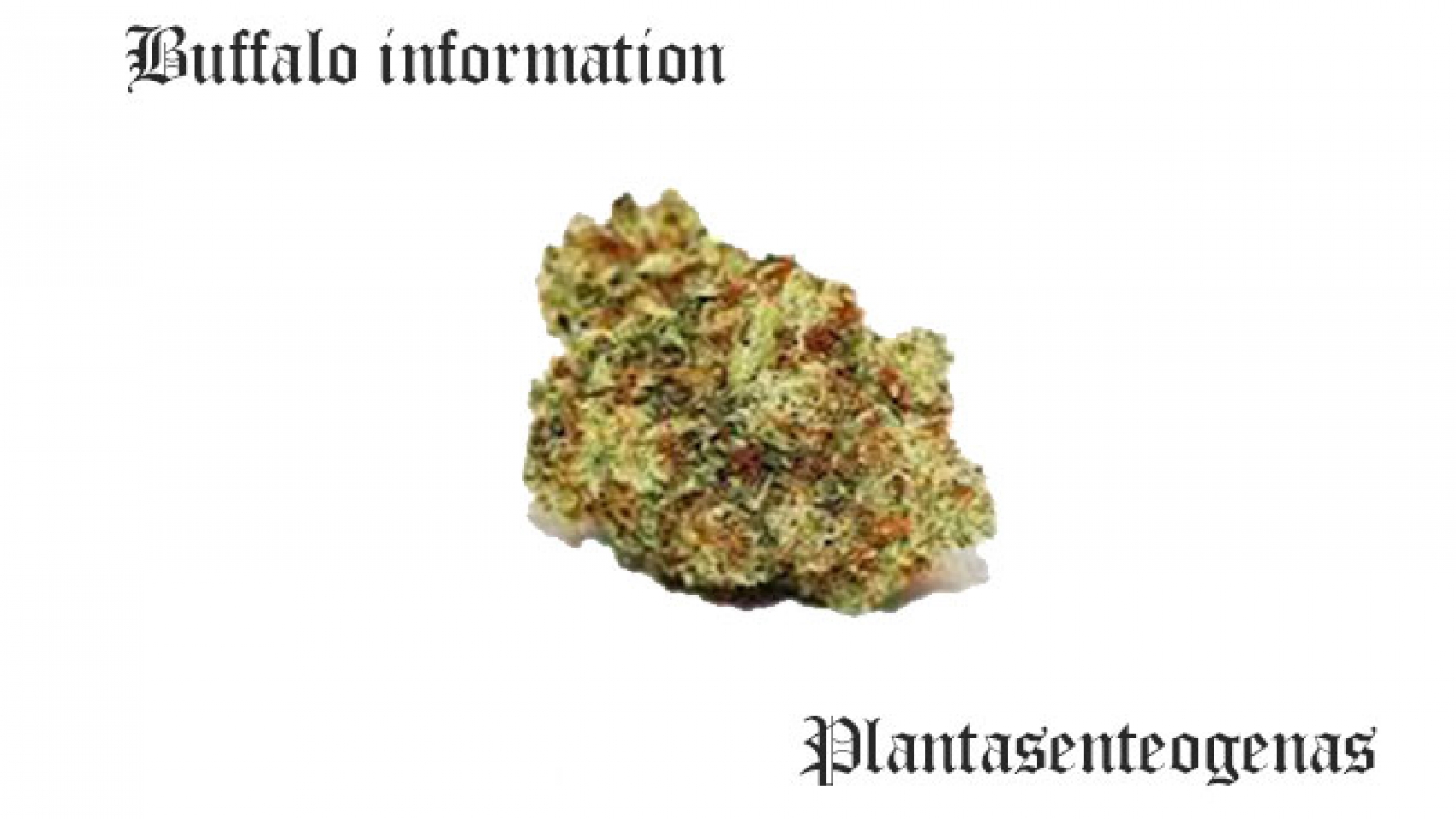 White Buffalo is a sativa marijuana strain made by crossing Romulan with Blackberry Kush and Bay 11. White Buffalo provides a powerful blast of effects that are uplifting, active and euphoric. This strain is a cherished rarity that is hard to find in most dispensaries. The flavor or White Buffalo is sweet and sour. Growers say these buds are covered in a snowy white coating of crystal trichomes.

Buffalo Bill is a sativa-dominant cross between Willie’s Wonder and Killer Ken bred by New House Seeds and grown by Doc and Yeti’s in Washington state. A blanket of crystal resin envelops the dense buds, almost hiding its interweaving green and lavender hues. Though 70% sativa by genetics, Buffalo Bill can hit with a force that leaves you anchored to your seat while the mind freely roams blissful euphoria. A sweet, earthy pine aroma floats from its kief-caked jar, sending your senses straight to a wintery tundra.

For the most part, this strain is visually unremarkable — flowers are typically small and cluster together in popcorn-like nuggets. The buds have the dense, solid structure typical of indica varieties, with leaves tightly coiled around their central stem. The leaves are various shades of dark green, with relatively few pollen-catching orange pistils. One way White Buffalo’s flowers stand out, though, is their high resin production — like the similarly-named White Widow, White Buffalo is coated in a layer of white trichomes that give it a soft, pale sheen. This resin also gives the flowers a very sticky texture that make the strain very difficult to break up by hand. When properly cured, the buds smell musky and sour, with some traces of berry aroma passed on from the Blackberry Kush grandparent strain. Breaking open or grinding the buds yields a woodsy scent of pine. When combusted, this strain gives off a harsh smoke that may induce coughing and irritate smoker’s sinuses. On the exhale, smoke tastes distinctly earthy and herbal.

White Buffalo hits users with a quick headrush: they may feel increased circulation in the face, particularly around the eyes and temples. Some may also detect a slight dizziness. As they acclimate to the high, users will notice that their perception is sharper. Ordinary stimuli or thoughts may take on new significance, leading users into a cerebral and freely-associative sort of “mindrace.” In a comfortable set and setting, this stimulated thinking can be accompanied by surges of positive euphoric energy. Although some users report increased physical relaxation as their high wears on, White Buffalo is unlikely to immobilize you with couchlock. This strain’s energy and lucidity makes it a great accompaniment to mundane daily tasks like cleaning. It can also be extremely chatty and social, giving you a good excuse to stay up all night with friends. Potent for even those with a high tolerance, White Buffalo is not recommended for use at night because of its tendency to keep users awake and wired.

These strong mental effects have medical applications as well. Patients with mild stress or depression may be able to channel White Buffalo’s emotional uplift into temporary relief from their troubling symptoms. Those with attention deficit disorders might find that the strain’s strong cerebral vibe helps them to sustain focus on a single task. White Buffalo has anti-inflammatory properties as well, making it an analgesic for mild aches and pains or headaches. Although dry mouth is a common undesirable side effect, patients who are prone to paranoia or anxiety should be more wary of White Buffalo’s tendency to bring about a disorienting mindrace.

Somewhat difficult to come by, White Buffalo is not a strain to miss if it is spotted in a dispensary. It will please sativa lovers looking for a buzzy daytime strain with some traces of indica relaxation. White Buffalo’s high resin content also makes it valuable in the production of hash and other THC concentrates.

THC levels of this strain are currently debatable, but its high is known to create a quick and powerful state of euphoria in the consumer. It will relax the body and mind, uplifting the spirits and inducing creativity – making this strain great for getting creative projects going or finishing them. As it’s a sativa, it may cause a surge in energy but this isn’t always the case for all consumers.

Besides dry mouth and eyes, White Buffalo may cause anxiousness or dizziness when higher doses are consumed.

It takes about nine weeks for White Buffalo to fully flower.

Users are often amazed at the odd scent of sage and dark fruit that they get when they first encounter White Buffalo. You may also get a hint of diesel along with overtones of freshly picked herbs and spices. If you break apart the buds, you will be rewarded with a smell of sweetness in the air that lingers.

The sweetness travels to the tongue as you get a combination of herbs, diesel, plums, and apple candy. You should experience an extra ‘kick’ of sweetness at the very end.

White Buffalo has a darker color scheme than other strains, but you can still appreciate the blue/purple hue, along with the orange pistils. The glistening trichomes are a real joy to behold when the strain is close to being ripe.

As White Buffalo has a sativa dominance, you won’t be shocked to learn that it prefers a climate with long summers, intense sunlight, and equal hours of sun and darkness during flowering. If you live south of the equator, you should have no problem growing White Buffalo outdoors. That isn’t the case for those of us who live in the Northern Hemisphere.

However, growers in California, for example, should be fine, because White Buffalo is extremely resilient and can handle low temperatures to a point. If you expose this plant to a lack of sunlight with short summers and long nights, its flowering time will increase significantly. As a result, Northern Hemisphere growers tend to grow this strain in a controlled environment.

When you grow White Buffalo indoors, you need to top the plant early because it grows to a significant height. Topping also improves circulation and ensures the plant receives plenty of light along with good air circulation. Although you can use a hydroponics system indoors, White Buffalo prefers to grow in soil.

It isn’t easy to get your hands on White Buffalo seeds but when you do, and you grow indoors, the flowering time can be as low as 7 weeks. You should also get up to 16 ounces per square meter planted. If you grow this strain outdoors, it will be ready for harvest from the final week in September onwards. It can yield up to 16 ounces per plant outdoors.

The THC level of White Buffalo is the topic of fierce debate with its content slated as being anywhere between 15% and 25%; quite the difference. We have seen a stash of White Buffalo from Space Monkey Meds which had a THC content of 26.42%! Definitely not for newcomers.

The CBD content of White Buffalo is negligible. It is usually below 0.1%, which means a THC to CBD ratio of at least 250:1 in some cases.

What Can I Expect When I Use White Buffalo Marijuana?

There is no playing around when it comes to this strain! It will hit you very quickly and begins with a euphoric cerebral high that elevates your mood. Users often report feeling an odd yet pleasant tingling buzz emanating from their temples. While you will probably feel energized at first, White Buffalo eventually helps you calm down and relax. Even so, it is not a bad afternoon smoke if you need a pick me up during a boring day at work.

One of the most popular uses of White Buffalo is for the treatment of depression. Although therapy sessions with experienced and qualified professionals are the best option, not everyone can afford the expensive sessions. When you grow your own White Buffalo, you have another potential method of stabilizing your mood, improving your self-confidence, and making you feel the joy of life once again.

Its anti-stress properties make it an option for patients suffering from anxiety. A common symptom of individuals with an anxiety disorder is fatigue; mainly due to the body being in a constant ‘fight or flight’ state which is mentally, physically, and emotionally draining. White Buffalo can provide an energy boost while tackling your anxiety. Because it is such a strong marijuana strain, you can also use it to treat pains and aches such as the swelling and redness associated with inflammation.

White Buffalo is a potent strain so you may experience a headache, dizziness, or elevated anxiety levels if you use too much. Otherwise, the main cause of concern is dehydration, which in itself causes headaches. We advise you to keep a jug of water beside you and sip while you use this strain.

White Buffalo isn’t cheap; in fact, it can cost over $400 per ounce, and it certainly isn’t plentiful, but it is worth tracking down. If you are struggling with anxiety and need something to give you a lift, look no further than this fascinating sativa.

Its eclectic genetic mix accounts for its unusual scent, taste, and effects. Its high comes at you quickly and can boost energy, confidence, and self-esteem. Its potency also means it is a potentially good option as a painkiller. It is fairly easy to grow, but we recommend doing so indoors because it needs a very specific climate to thrive.