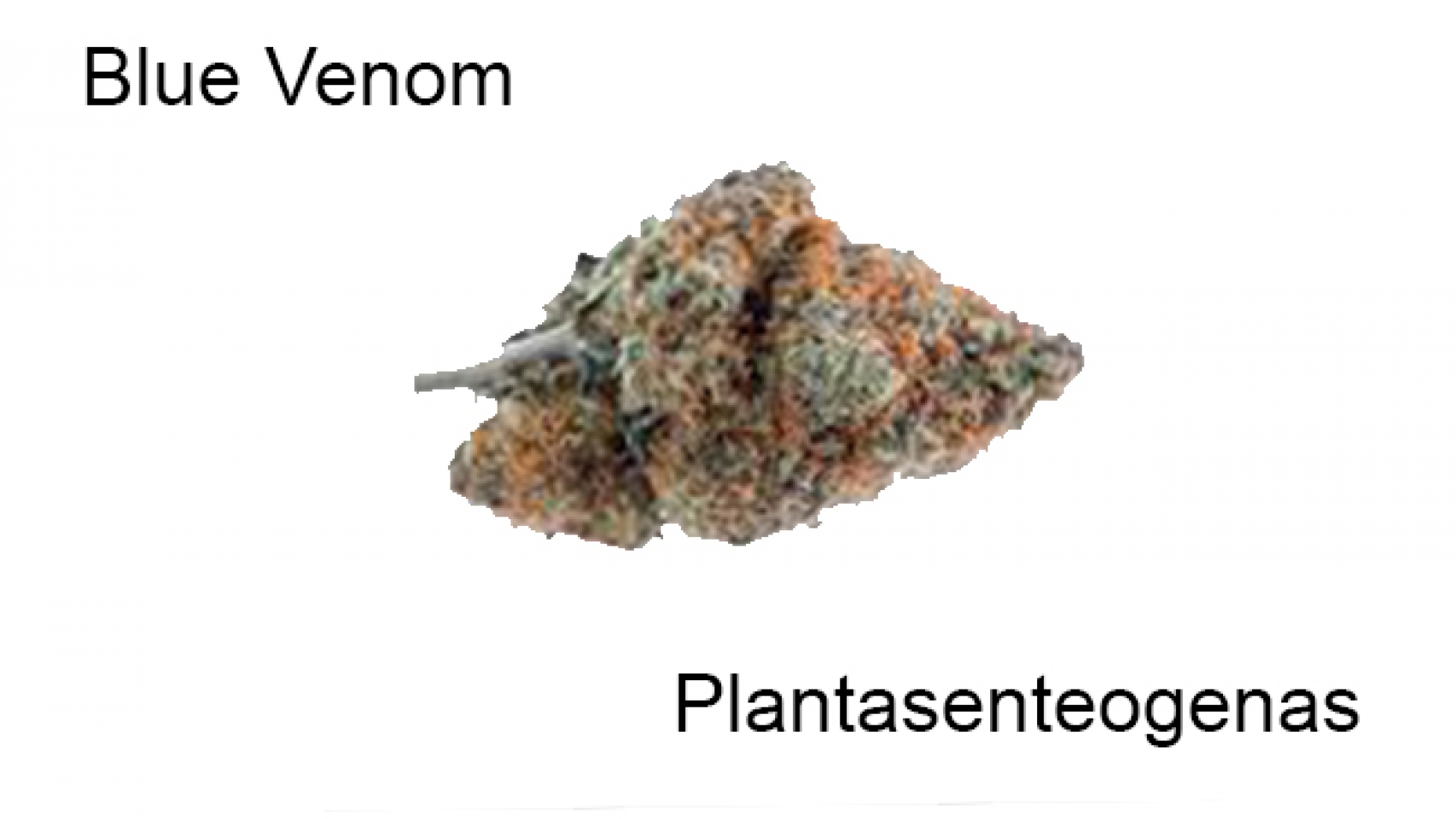 Blue Venom is an indica-dominant hybrid that looks especially appealing. G13 Labs-the European producers of Blue OG and Royal Kush-created when they crossed two powerful strains: tasty Blueberry with the notoriously resinous White Widow. Blue Venom’s sting will infect novices and veterans alike with thorough and long-lasting sedation. The THC content of this product has been measured at between 12% and 23%.

“Blue Venom” flowers impress with their large buds that have the tight, dense bud structure usually associated with Indicas. The tightly packed leaves are dark green and have bright orange pistils going through them. The shades of blue on the leaves happen because the plant’s pigment, called anthocyanin, is more agitated during colder periods while it grows.

When properly cured, this blueberry strain has an unmistakably fresh and fruity aroma. Lurking under the surface are also some hints of citrus, while breaking or grinding up the buds releases a rich, hashy scent. Possibly passed on from its South Asian origins. When it is inhaled, Blue Venom gives off a smooth smoke with an easy throat hit and leaves behind the tart berry taste on exhale. It also has a mild herbal kick with hints of the Jack Herer strain for those who wish to experience something similar. The strain has no discernible grape flavors, despite its purple hue. If you’re a smoker, remember that the Blue Venom strain’s flavor profile is best experienced in a joint or through pipe smoking.

Blue Venom immediately makes its effects felt, with pressure around the eyes and temples. Users may experience an uptick in mood and a sudden surge of energy. These effects are typically accompanied by the sharpening of senses that may cause users to experience sights and sounds in a new way. The trippy effects may amplify conversations between friends and provide the ideal backdrop for spending time together. New kinds of thoughts arise more in a relationship to anything cerebral, making it the perfect chance to develop an idea with your buddies. When the high takes hold of them, Blue Venom quickly wears off into a feeling of palpable physical relaxation. Though still mentally alert, smokers will find themselves content to melt into the ambiance of their surroundings. Due to its high THC content, this strain can even produce a deep and fulfilling sleep for users. Because of its progression from energetic stimulation into deep sedation, Blue Venom is best enjoyed in the afternoon or early evening. Although experienced cannabis users will be less likely to suffer long-term effects, there are still hazards from usage that they must take into account.

Blue Venom is already used in medical cannabis patients for other applications. Acupressure can relax the body and can soothe aches and pains, whether they are temporary due to injury or chronic conditions like arthritis or fibromyalgia. It may also temporarily temper the harsh symptoms of mild to moderate stress and depression. When faced with other long-term insomnia cases, it can be effective. Although it is toxic to humans, this type of venom can be a potent appetite stimulant. Because this does not bring about deep thinking, it could be a good option for those who are prone to panic.

Which Breeder to Choose

Not every Blue Venom Seed is created equal and genetics can depend heavily on the breeder.

It was through cross-breeding these strains of cannabis that Blue Venom marijuana seeds were created, in an attempt to create a strain with the combined effects and therapeutic properties. Although successful cultivation in the wild is dependent on a humid climate, within the confines of an indoor space it thrives with consistent daytime temperatures between 72 and 80 degrees Fahrenheit. Indica plants are easy to grow indoors, their bushy structure is easily accommodated in a small space. Some may think that the fruit of Blue Venom plants will turn a deep indigo shade with exposure to cold nighttime temps, but resulting products are more likely to be purple—but not blue. This strain flowers in 8 to 9 weeks when grown indoors.

A great way to relax after a long day is with Blue Venom. Whether you’re alone or with friends, this cannabis offers the perfect option for unwinding. Be sure to bring enough for your friends when you’re bringing out Blue Venom because its fragrant smells are sure to draw attention.