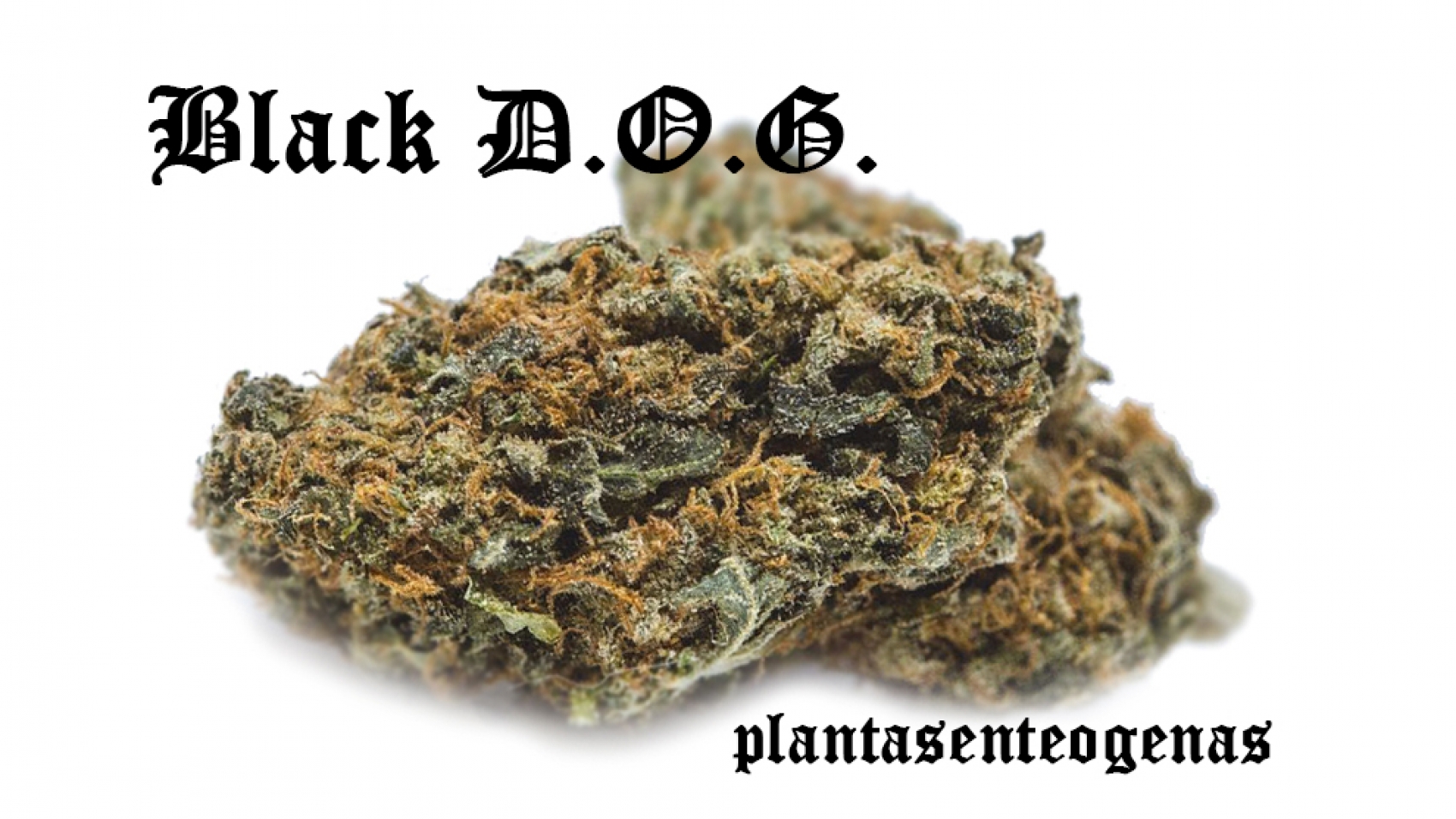 Are you looking for an indica-dominant hybrid that will overhaul your senses with tranquility and relaxation? Look no further than the Black Dog strain.

This strain is not to be confused with the well-known Black Dog Tavern by Martha’s Vineyard. This product is unique to itself and offers an original flavor profile. The body high is incredibly enjoyable for users who appreciate a cannabis-induced relaxation at the end of a long day.

From the rolling and fertile hills of California, Black Dog was brilliantly created by the masterminds of the Humboldt Seed Organization. This woodsy cannabis will help you apply laser-sharp focus to any task before rocking you into a relaxed state.

All About Black D.O.G.

Black D.O.G.’s flowers are medium to large in size and cling together in elongated, almost cylindrical shapes. These buds have a seemingly hybridized internal structure, with the dense center characteristic of indica varieties but with long, feathery leaves that have more of a sativa character. The leaves themselves are a bright shade of spring green and are wound through with a high concentration of curly orange pistils. Translucent white trichomes finish off these flowers, accounting for their psychoactivity and making them very sticky to the touch.

When properly cured, Black D.O.G. gives off a predominantly woodsy, earthy scent with hints of fresh pine. A deeper whiff may pick up on some fruity accents lurking underneath. Grinding up these buds, meanwhile, yields a deeply musky odor that pays tribute to this strain’s Kush roots. When it is combusted in a pipe or joint, Black D.O.G. burns with a smooth and refreshing smoke that’s typically easy to inhale. On the exhale, this smoke mingles flavors of citrus and pine.

This feminized plant is indica-heavy, with an 85% concentration. Featuring only 15% sativa, Black Dog weed strain is an average-potency plant with a THC content of 16-21%. If you appreciate the high of a delectable indica, this brilliant blend will definitely pique your interest.

Humboldt Seed Organization bred this user-friendly plant in the rolling California hills of Humboldt County. Parented by Blackberry Kush and Emerald Headband, both of which are indica-dominant strains, Black Dog marijuana strain boasts the best indica-inducing characteristics of both of her parents.

Like many other indica-dominant strains, Black D.O.G. can be a creeper that requires several minutes before its effects become apparent. As such, impatient consumers are advised to wait for 15 minutes or so before increase their dosage. Eventually, the high arrives with a concerted feeling of pressure around the temples and lower forehead (the so-called “headband” effect for which parent strain Emerald Headband is named). As smokers become accustomed to this odd sensations, they may become aware of some changes in cognition and sensory perception. Ideas may seem to take on a new intensity or may move more quickly than usual. At the same time, consumers may be prone to slight visual or auditory distortions and may experience strange phenomena like a feeling of time dilation. Those who are so inclined can push these trippy properties even further with some moody lighting or atmospheric music.

As this high wears on, Black D.O.G.’s physical effects, at first only subtle, may progress into a heavy body stone. Limbs and eyelids may be weighed down in equal measure and any extended physical activity might require more effort than usual. Although Black D.O.G.’s initial mental high may persist, smokers may be stripped of some of their earlier energy and motivation. As such, this strain’s later phase is best suited to kicking back with likeminded friends while indulging in passive activities like binge-watching or snacking. Because of its mostly downbeat, sedated vibe, Black D.O.G. is recommended for nighttime consumption.

Black D.O.G.’s relaxing and embodied effects can have several benefits for medical cannabis patients as well. Its cerebral onset can bring some measure of focus to those with attention deficit disorders. Additionally, its constant euphoria can alleviate the symptoms of stress, depression, and anxiety. Physically speaking, Black D.O.G. may be a balm for all kinds of aches and pains, both temporary and chronic. The strain’s headband-like feeling of pressure may be a particularly good way to relieve the intraocular pain associated with eye conditions like glaucoma. In properly relaxed conditions, Black D.O.G. may even counteract insomnia, lulling smokers into a heavy sleep. Because it comes with an elevated risk of paranoia and disorientation, Black D.O.G. should be consumed with some caution and moderation by patients who have a low THC tolerance.

Said to be a heavy producer, Black D.O.G. grows medium in height with strong vigor. Because of the strain’s incredibly short flowering cycle, which takes place from 48 to 55 days, the plants tend to be pest- and moisture-resistant. During the flowering phase, Black D.O.G. appears to produce chunky, dense colas frosted with icy trichomes.

Suitable for indoor or outdoor growing conditions, cultivators can expect harvests between 400 to 500 grams per square meter or 1,000 to 3,000 grams per plant, respectively. If grown outside in the Northern Hemisphere, growers should plan to harvest Black D.O.G. in late September or early October, while plants grown in the Southern Hemisphere should be ready to harvest in late March or early April.

Humboldt Seed Organization has made seeds relatively available for those who are interested in growing Black Dog at home. You can easily purchase the seeds online for delivery. Furthermore, these plants are relatively low maintenance. This strain can be grown either indoors or outdoors with a semi-humid climate.

Flowering time is anywhere between 7 to 8 weeks when grown indoors. It usually produces an above-average yield of flowers! However, keep in mind that these plants are relatively tall, so you’ll need ample room for them to mature properly.

Fortunately for home growers, Humboldt Seed Organization has made seeds of Black D.O.G. available for sale online. Once obtained, it can be grown either indoors or outdoors in a semi-humid, Mediterranean-like climate. Plants can be surprisingly tall, maxing out at about 9 feet when grown outdoors; indoor gardeners may need to occasionally prune their crops to keep this height manageable. Black D.O.G. flowers within a very brief 7 to 8 weeks when grown indoors and is ready for outdoor harvest in late September through early October. Growers can count on a higher than average yield of flowers.

Black D.O.G.’s deeply relaxing high is a great way to wind down after a stressful day of work. It’s as enjoyable savored alone as it is when shared with friends.