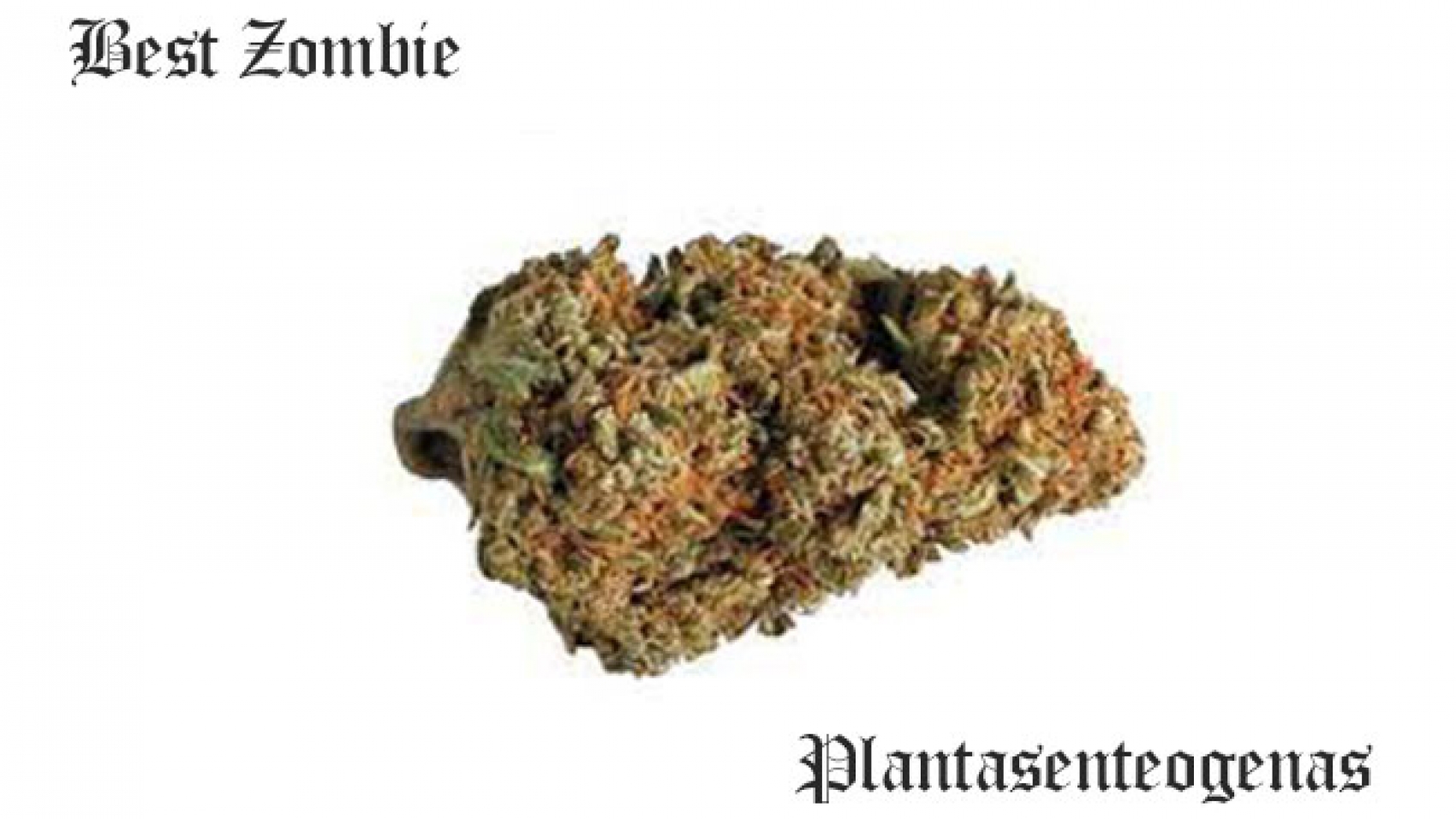 If you’re looking to transform into a flesh-eating monster, Zombie OG is not the choice for you. After a taste of this indica, the only thing you’ll be hungry for are the cold cuts in the fridge (though you may be too catatonic to get up and grab them). Heavy and lethargic, this cross between OG Kush and Blackberry has been a favorite among those suffering from muscle spasms and acute pain. Due to its strong sedative effects, don’t expect to have the energy to rampage the city. This strain is best used at nighttime, when you’re not expecting to do much of anything.

Zombie Kush was developed by Ripper Seeds of Sabadell, Spain – a small city just outside of Barcelona. Bred using primarily Amnesia, Lavender Kush and Bubba Kush genetics, Zombie Kush is an 80/20 Indica hybrid. With some impressive Afghani and Pakistani heritage way down in the strain’s lineage, Zombie Kush is a heavy Indica that is well-known for its potent sedative properties. Although developed by a Spanish seed company, the Zombie Kush strain is especially popular in California, United States.

The Zombie Kush buds that I acquired from La Mesa Barcelona featured short trichomes that densely populated every surface. This particular batch was heavily mottled with orange “hairs” and were devoid of the purple characteristics normally attributed to this variety. The buds were compact and fairly unyielding, but they did have a little bit of springiness. When handled these flowers were moderately sticky and also a little oily; a trait I am not accustomed to.

Zombie Kush reeks of good ol’ fashioned skunk. While the potent stench of this strain is something to get excited about, it can also be a cause for concern for people who live in regions where marijuana is still illegal. This is because even a half gram of Zombie Kush can be easily smelled from across a large room. And if you have this strain tucked into your jacket pocket or a backpack, you probably don’t want to stand too close to anyone who could represent a threat, as the smell will likely seep through your clothing even if you don’t notice it.

While Zombie Kush does smell skunky, it also releases a pleasant earthy smell that should be familiar to most Kush enthusiasts, which I am definitely not – but this strain is exceptional. When smelled up-close, Zombie Kush has notes of pine, sage and other Italian spices without being “spicy,” and there’s also just a hint of sweetness in there too, but I can’t articulate exactly what…I can only describe it as faintly lemon-diesely.

After handling Zombie Kush flowers, your fingers will smell like fresh cannabis extract – a scent that lingers for some time, even after washing your hands.

Zombie Kush produces thick white smoke where the taste is negligible but quite clean overall. The flavor is slight but in general it’s more earthy than anything else; not fruity, not nutty. The flavor is not as good as other Kush varieties like Cranberry Kush or Afghan Death, but it’s neutral enough to appeal to nearly anyone while still carrying that classic Kush taste. Unlike other Kush strains, there is no aftertaste with Zombie Kush.

Zombie Kush is extremely strong. If you have active plans for the day, you might cancel them after smoking this strain. I smoked Zombie Kush for about 10 days and had to fight the urge to take a nap quite often. This weed is tremendously sedative.

After just 2 hits I feel the high from Zombie Kush start in the back of my head and then move to the top and forehead, but nothing noticeable in the eyes. However, the high does cause a pleasant buzzing/tingling in the cheek bones directly under the eyes.

Two hits from a freshly cleaned bong is all that is required for an extreme state of relaxation to spread from the center of my chest to my back and then move down my legs. A warm sleepy feeling begins to take over, and a nap suddenly sounds good regardless of whatever else is going on…

3 hits is enough to get even veteran smokers exceptionally high. For me this consisted of uncontrolled periods of “zoning out” accompanied by a hyper-awareness of sounds. Drills, automobiles, televisions, radios, children playing, a man on the phone, my wrist moving across the table and the scraping return of the buttons on my blazer as I made switchbacks across the page; all of these sounds became amplified and prominent.

At 4 hits the physical effects of Zombie Kush are undeniable. I felt this in the form of a deep sense of relaxation overall, while my larger muscle groups felt super-flexible and noticeably comfortable. My bones and joints seemed smoother and old martial arts and cycling injuries that normally give me pain subsided or disappeared.

This strain is short-acting but also has a short per-hit peaking period of about 2 minutes. Overall peaking period can be as long as 10 minutes but in most cases I found that full effect was achieved within 4-5 minutes of smoking.

This is one of the longest lasting strains available in Spain right now, with average duration of the critical parts of the high lasting from 2.5 to 3 hours or more.

The effects of Zombie Kush seem to be moderately affected by exercise, while only mildly decreased by eating or drinking.

Zombie Kush is an excellent strain for medical purposes; most notably for aid in sleep and the reduction of stress-related anxiety. This is also a useful strain for treating pain or discomfort in muscles, joints or ligaments, and for some people can be a “highly” useful sedative.

Zombie Kush is also an excellent choice for recreational users who want a knock-down dropout one-two-punch type of marijuana and don’t have complicated plans for the day. For athletes, this could be the go-to Indica strain; especially for sports that are hard on joints.

Have you tried the Zombie Kush strain? Have you grown it? Let us know your experience in the comment section below!