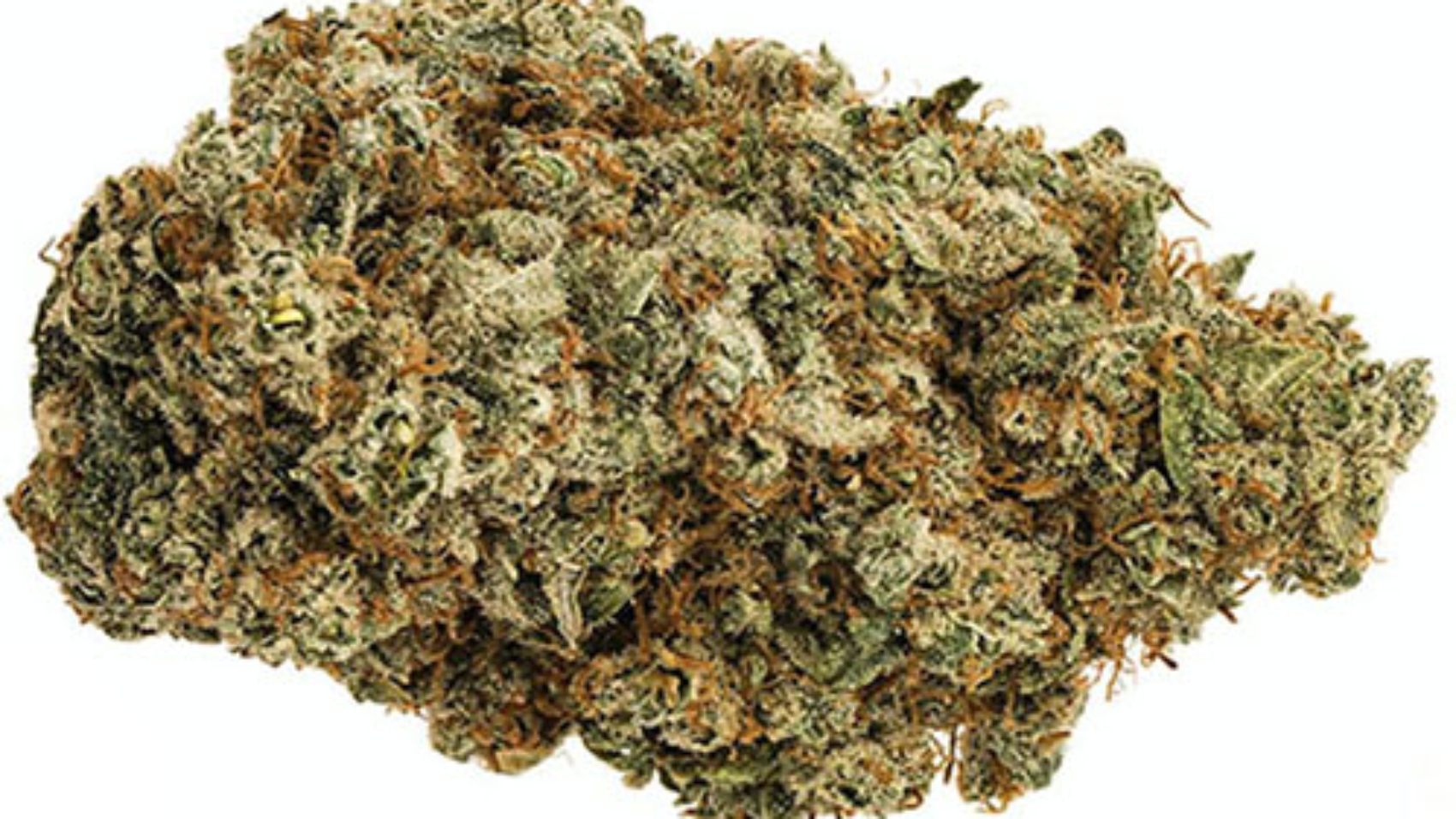 Alien OG(also called Alien OG Kush) is a Hybrid marijuana strain with an astronomical THC level, frequently approaching 28% in tests. This potency makes it popular in the medical community, especially for those with more severe conditions. This strain will leave marijuana consumers feeling relaxed and happy.

Alien OG is not a weak beginner strain, quite the opposite. This potent hybrid induces the best of both indica and sativa worlds, but leans heavily on it indica roots. Unlike any other strain, this plant can induce a complex and pleasant blend of a soaring psychedelic head-high mixed with a stimulating and invigorating body high.

There’s something so appealing about strain names that relate to space or other cosmic matters, and Alien OG is no different. Not only will its name capture you from the get-go, but its potent buds will also lock you in, transporting you into outer space with its powerful, medicinal abilities. Widely popular throughout California because of its insanely high THC content, this cannabis strain has a way of mixing the best of both indica and sativa into one wonderful package.

Bred by combining the genetics of the hybrid Tahoe OG Kush and the indica Alien Kush, Alien OG offers the best of both worlds, possessing a 50% indica, 50% sativa makeup. First appearing in the Bay Area of California, growers could initially only cultivate this cannabis strain with a clone, but that soon changed as word got around about Alien OG’s amazing benefits. Eventually, Cali Connection began selling seeds to plant Alien OG, leading to the spread of this strain to areas that originally lacked its presence. Aside from its interesting back story, many individuals are curious about the strain’s high yields, potent high, and refreshing flavor.

When the Alien OG seeds are combusted, the flower will give off a hashy and spicy scent that’s really typical for the OG marijuana family. The smoke is smooth and lung-expanding. Smokers taste a faint hint of ammonia on exhale, combined with hashy incense.

In terms of the aroma, the strain really took the features of other OG strains. The same applies to taste. You can expect multiple earthy notes from the Alien OG strain, as well as strong hints of pine and lemon.

The flavor is similar to the aroma, characterized by strong notes of lemon and pine. The flavor is natural and balancing, it doesn’t overwhelm the senses but definitely leaves an impact on the consumers. Those who choose to smoke the Alien OG weed report a smooth smoke, somewhat velvety on inhale and soft on the exhale. So, expect to skip the coughing that comes after consuming some Indica strain, at least if you are an experienced smoker.

Featuring dense, round buds, the look of Alien OG nuggets is quite classic, with rich, deep green sugar leaves and extremely curly, orange pistils. These pistils aid in the pollination process and are closely packed together. Due to the high THC content of Alien OG, it possesses an intensely frosty, very sticky coating, the trichome layer vouching for the strain’s strength. This also gives the strain its gorgeous, cosmic-looking glimmer, complementing the extraterrestrial name.

Although the average THC content for Alien OG sits somewhere between 20-25%, tests have measured numbers of more than 28%, which means this cannabis strain has one of the greatest potencies on the market. Because the cannabis world is so focused on developing stronger strains, we suspect that Alien OG will continue to be bred to be even more powerful.

Don’t expect to receive much CBD from Alien OG. The highest tests measure this strain’s CBD content at a mere 0.1%, which is something, but still nothing truly notable. If you’re desiring a cannabis-type with a greater CBD content there are many options that could greater suit your needs, including Cannatonic, ACDC, Harle-Tsu, Pennywise, Charlotte’s Web, Canna-Tsu, Harlequin, and Ringo’s Gift, just to name a few. Alien OG is a far better source of THC than CBD, so it should be consumed by those who desire the medicinal benefits of tetrahydrocannabinol.

Alien OG tends to be mentally stimulating with a cerebral high, yet still deeply relaxing for the body, which really expresses how it is suitable for a wide range of individuals. This cannabis strain possesses a distinct blend of the indica and sativa sides, offering a melting relaxation towards the end of the high while keeping the brain sharp, alert, and creative. At the same time, you can expect to feel more joyous and happy, sinking into a state of heavy bliss. For some, Alien OG makes the perfect strain for getting at-home work done, especially if you have more tasks to complete even once you’ve left the office.

This is because this cannabis type finds a way to relieve the body of physical tensions and stress, while also transporting the mind into a productive, creative, and sharp headspace, which is exactly what you need to concentrate and complete projects after-hours. It is impressive how this strain is able to target both the mind and body separately, impacting both parts in different, desirable ways.

Due to its relaxing, buzzy impact on the body and its stimulating, creative effect on the mind, you can imagine that Alien OG would hold quite a few medical uses. Physically, Alien OG works hard to relieve headaches, pain, fatigue, nausea, lack of appetite, and stress, yet at the same time it can also chill you out in the evening and help you fall deep asleep. It really depends upon what time of day you’re consuming this marijuana type, along with what your body is needing to flourish in that given moment.

Mentally, Alien OG is stimulating, yet it can still be utilized for anxiety, depression, insomnia, PTSD, and ADHD/ADD. Although it may seem confusing how this one contradictory plant might be able to produce all these different results, Alien OG just has a way of communicating with your body and understanding what it desires the most.

Cultivating Alien OG has proven to be moderately difficult for inexperienced growers. This plant prefers a warm and humid outdoor environment, and needs to be kept at around 50% humidity when kept indoors. Although this strain is quite resistant to standard molds and diseases, it is recommended that you keep an eye on it exact environment just to be sure it is in its optimal setting.

If heavy, top quality yields are what you’re aiming for, you’re in luck! Alien OG is known to generate just that, and with intensely potent buds, it seems like a match made in heaven- or should we say space? Not only can you expect rewarding harvests from successfully cultivated crops, but the magic also lies in the immense density of the actual nuggets and colas themselves.

This high-yielding quality of Alien OG is actually quite impressive, for strains with indica genetics don’t typically produce a ton of consumable herb. Even if the results of growing this strain can be worthwhile, cultivation does not come without its challenges. In fact, Alien OG can be quite challenging to produce without the proper knowledge and a bit of experimentation. If you have a lot of experience cultivating cannabis already, Alien OG will be nothing new, but for those just starting out, be sure to thoroughly conduct your research before attempting.

Alien OG plants are usually short in height, measuring less than 30 inches, with a rounded appearance. The buds tend to all cluster along one prominent stem and then fatter colas develop from there, which is quite a typical indica structure. The look of this strain is derived more from its Alien Kush genetics than the OG side. With Alien OG it is vital to monitor and maintain certain factors, including observing light, nutrient, humidity, and water levels. Additionally, any leaves that block bud development should be regularly pruned and trimmed back to prevent malnourishment.

This cannabis strain is suitable for both indoor and outdoor cultivation, yielding well in either environment as long as the right conditions are met. Outdoors, Alien OG needs plenty of sunlight and balanced humidity levels to thrive, and these same qualities should be recreated when growing indoors. Because these bud clusters tend to be dense, they are more susceptible to mold and mildew development, which is part of why maintaining a low to mild humidity level is essential. 68-78 degrees Fahrenheit is the sweet spot for this cannabis type.

The flowering period of this strain is around 7-9 weeks, which is on the shorter side, with harvests typically falling around mid-October, long before any bad weather can set in, a vital factor for outdoor grows. For successfully cultivated crops, typical yields range around 10-11 ounces per meter squared indoors, and 13-14 ounces per plant outdoors which is extremely excellent for a strain that looks close to a typical indica physically-speaking.

It is vital to properly cure buds after harvest to ensure that the THC and other medicinal cannabinoids are properly preserved, increasing the overall effects of Alien OG.

Alien OG grown indoors can be expected to yield an average of about 11 ounces of fresh bud per harvest. This flower takes around 8 to 9 weeks to be ready for a hearty harvest.

This hybrid can yield around 13 ounces of bud when it is kept in a healthy outdoor environment. Alien OG flowers through the summer and is ready for a harvest around the month of October.

If you struggle with depression, anxiety, PTSD, ADD/ADHD, stress, insomnia, pain, headaches, fatigue, lack of appetite, or nausea and are searching for an herbal alternative to conventional options, the Alien OG cannabis strain may be able to provide some relief and assistance. Popular because of its multidimensional uses, along with its potent THC content and massive yields, Alien OG has grown to become a fan favorite not just in California, but all over the world as well.